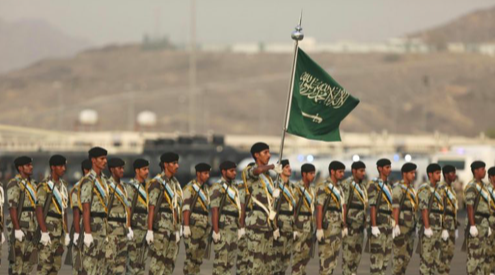 The Saudi-led coalition fighting the Houthi group in Yemen said late on Tuesday that it would halt military operations from Wednesday, following a United Nations’ call for a truce during the Muslim fasting month of Ramadan.

The UN has been working with the Saudi-led military alliance and the Iran-aligned Houthi movement, which have been at war since 2015, to secure a peace deal and alleviate a dire humanitarian crisis in the impoverished country.

“The joint forces command of the coalition announces a halt of military operations inside Yemen starting Wednesday at 6 am,” Saudi state news agency SPA reported, citing a statement from the coalition’s spokesman Brigadier General Turki al-Malki.

The decision came amid international efforts to end the Yemeni crisis and reach a comprehensive political solution, SPA said.

The UN proposal calls for a temporary ceasefire during Ramadan in exchange for allowing fuel ships to dock at Houthi-held Hodeidah port and a small number of commercial flights to operate from Sanaa airport, sources familiar with the matter said. Ramadan begins this weekend.

As of March 27, four fuel ships were waiting off Hodeidah port, including a tanker stuck in the coalition holding area for nearly three months, UN data showed.

Sanaa airport has been closed since 2015, when the coalition intervened after the Houthis ousted the government of Abd-Rabbu Mansour Hadi in 2014.

The plan drafted by UN special envoy for Yemen Hans Grundberg is also backed by the United States and other Western powers, the two sources said.

Saudi Arabia hosted allied factions from Yemen’s war on Tuesday but the Houthis said they would not attend the talks, unless they were held in a neutral country.

In a statement last week, the Houthis described the UN initiative as positive.

Riyadh’s consultations are being held under the aegis of the Riyadh-based Gulf Cooperation Council and are expected to take more than a week.

The UN and the United States have since last year been trying to secure a permanent truce but differences over sequencing have thwarted efforts to reach a compromise between the warring sides.

However, in a statement released on Wednesday, the Houthis’ Supreme Political Council said that if Saudi Arabia did not agree to end its air raids and blockade of Houthi-controlled ports, it would continue to fight.

“The Yemeni leadership and people will retain their full right to take whatever political and military steps it deems appropriate in a manner that guarantees their legitimate rights,” the statement said.

With unilateral ceasefires declared by both Saudi Arabia and the Houthis, and with no positive response from each side, peace for Yemenis appears to be hanging by a thread.

The U.N. special envoy for Yemen, Hans Grundberg, called the Saudi-led coalition’s cease-fire offer “a step in the right direction” and wished the delegates success in their talks, which are expected to continue through April 7.

At the United Nations in New York, spokesman Stephane Dujarric said Grundberg expressed hope that discussions at the conference “will help increase momentum toward bringing the Yemeni parties back to the negotiating table under U.N. auspices.”

Grundberg will be going to Muscat in Oman on Thursday where he will be meeting with a Houthi delegation, Dujarric added.

Noting that the Houthis recently welcomed a temporary halt to military operations in Yemen, Dujarric said Grundberg’s message to all parties is “to adhere to what both have kind of said publicly, which is a cessation or pause of the fighting during the month of Ramadan.”

The war in Yemen, the Arab world’s most impoverished country, began in September 2014, when the Houthis swept into Sanaa from their northwestern stronghold. The Houthis then pushed into exile the government of President Abed Rabbo Mansour Hadi, elected in 2012 as the sole candidate after the long rule of Ali Abdullah Saleh.

A Saudi-led coalition, including the UAE, entered the war in March 2015 to try and restore Hadi’s government to power. But the war stretched into long bloody years, pushing Yemen to the brink of famine.

More than 150,000 people have been killed in the warfare, according to the Armed Conflict Location and Event Data Project. Those include both fighters and civilians; the most recent figure for the civilian death toll in Yemen’s conflict stands at 14,500.

A weeklong round of consultations kicked off in Saudi Arabia’s capital, Riyadh, on Tuesday, with that goal in mind. But it had one major problem – the absence of the Houthis, who control the majority of Yemen’s major population centres.

The Houthis were invited, but rejected the invitation from the Gulf Cooperation Council (GCC), and said they would instead welcome talks with the Saudi-led coalition at a neutral venue, including in other Gulf states.

“It is neither logical, nor fair that the host of the talks is also the sponsor of war and blockade,” the Houthi movement said in a statement published on their official news agency.

Instead, the Houthis stepped up their own missile and drone attacks on several areas in Saudi Arabia, including one last Friday near a Jeddah racetrack that was hosting Formula One motor racing, before announcing a three-day unilateral ceasefire on Saturday.

The two sides have however for the first time in years agreed a nationwide truce, which would also allow fuel imports into Houthi-held areas and some flights operating from Sanaa airport, the U.N. envoy said on Friday.

The U.N.-brokered deal between a Saudi-led coalition and the Houthi group aligned with Iran is the most significant step yet towards ending a conflict that has killed tens of thousands and pushed millions into hunger. The last coordinated cessation of hostilities nationwide was during peace talks in 2016.

U.N. Secretary-General Antonio Guterres said the truce “must be a first step to ending Yemen’s devastating war”, urging the parties to build on the opportunity to “resume an inclusive and comprehensive Yemeni political process”.

As stated earlier, the deal stipulates halting offensive military operations, including cross-border attacks, and allowing fuel ships to enter Houthi-held Hodeidah port and commercial flights in and out of the airport in the capital, Sanaa, “to predetermined destinations in the region”.

Grundberg said the parties agreed to discuss opening roads in Taiz, effectively under siege, and other Yemeni regions.

Is Saudi Arabia losing too much?

Many believe that it is largely in the interest of Saudi Arabia to commence a truce, due to the severe damage that the Houthis are inflicting on Saudi Arabia’s valuable oil facilities, and the large operational costs that are going into the conflict from the Saudi’s side, which has not paid off up until now, with the Houthis controlling the territory with most of Yemen’s population.

Last week, a huge plume of smoke could be seen above an oil facility in the Saudi city of Jeddah, according to multiple media reports, with Yemen’s Houthi group claiming they had attacked a Saudi Aramco site with missiles.

The Associated Press cited videos of a raging fire at an oil depot, saying the location of the blaze was near the North Jeddah Bulk Plant — which is southeast of the city’s international airport. Meanwhile, a Reuters source said a Saudi Aramco facility had been hit.

On Sunday morning, Saudi authorities confirmed an attack on Aramco facilities last weekend, with Houthi rebels using missiles and drones to target at least six sites across the kingdom, including an Aramco fuel depot and a liquefied natural gas plant.

“There were no injuries or fatalities, and no impact on the company’s supplies to customers,” Aramco CEO Amin Nasser said Sunday on an earnings call.

The Houthis have carried out thousands of cross-border missile and drone attacks into Saudi Arabia in the years since Riyadh launched its aerial assault on Yemen, which has killed tens of thousands of Yemenis.

Aramco suffered a major attack on its facilities in 2019, when strikes on the Abqaiq and Khurais facilities cut off roughly half the kingdom’s oil production in one day.

Abqaiq, in Saudi Arabia’s eastern province, is the world’s largest oil processing facility and crude oil stabilization plant with a processing capacity of more than 7 million barrels per day. Khurais is the second-largest oil field in the country with a capacity to pump around 1.5 million bpd.

Those attacks in 2019 were the biggest on Saudi oil infrastructure since Saddam Hussein’s invasion of Kuwait in 1990, when the Iraqi military fired Scud missiles into the kingdom.

The rate of the attacks have increased in recent months, leading many to believe that this is the main incentive for Saudi Arabia to halt this conflict in this turbulent time, with the Russia-Ukraine crisis brining up oil prices. The ceasefire is unlikely to hold for long however, due to the lack of incentive from the Houthis side, and the differences between the two parties largely unsolved.