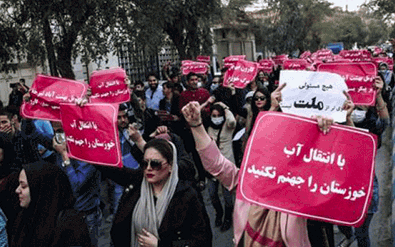 For the sixth night in a row, street protests have taken place in southwest Iran, triggered by a serious water crisis. In recent days, two people have died in clashes between the civilian population and the police.

Videos  posted on social networks show security forces firing water cannons and tear gas to disperse the crowd. The semi-official Fars news agency spoke of a policeman killed and a colleague wounded by “rioters” in the port city of Mahshahr, in the province of Khuzestan. In Izeh some citizens invoked “Reza Shah”, a reference to the king who founded the Pahlavi dynasty overthrown by the Islamic revolution in 1979.

According to the dissident movement Human Rights Activists News Agency (Hrana) there have been at least 31 protests across Iran in the past two days, including demonstrations by workers and farmers. The country is facing its worst drought in 50 years, with a water crisis (exacerbated by US sanctions) that has affected families, agriculture, livestock and caused numerous power cuts.

The coronavirus emergency is witnessing a surge of cases. In the last 24 hours, the Islamic Republic has recorded 27,444 new infections and 250 deaths. According to the Tasnim news agency, which cites sources in the Ministry of Health, this is the highest number of deaths in the last two months. The overall toll of the pandemic in Iran has risen to 87,624 deaths and 3,576,100 infections. In the meantime, the government has imposed a new lockdown, the fifth so far, in the provinces of Tehran and Alborz, closing bazaars, markets, public offices, cinemas, gyms and restaurants until 26 July.

Authorities have so far confirmed that two civilians, 18-year-old Ghasem Khozeiri and 30-year-old Mostafa Naimawi, were shot dead on Friday, but they say the young men were not protesters and were murdered by “opportunists and rioters”.

More protesters are feared dead but officials have yet to confirm further fatalities. They have also not disclosed how many civilians have been arrested.

Sporadic internet slowdowns or blackouts have been reported across the province for several days. Despite the internet restrictions, numerous videos have come out of several counties in Khuzestan in the past week, in many of which shots can be heard and tear gas is seen being used.

Oil-rich Khuzestan, parts of which were temporarily seized by Iraq’s Saddam Hussein after he invaded Iran with backing from the West, has faced water problems for decades. Its large Sunni Arab population has long complained of being marginalised in predominantly Shia Iran.

This year, however, has been especially difficult for the province – and the whole country as an extension – due to extremely hot temperatures and droughts that have led to widespread blackouts and water shortages.

Officials acknowledge that the province has been hit hard, but they claim separatist groups are to blame for the violence and accuse foreign media of trying to take advantage of the situation to oppose the theocratic establishment.

Meanwhile, the discontent is spreading across the country and has reached the capital, which has been in lockdown for a few days due to a new outbreak of Covid-19 infections; groups of inhabitants have been chanting anti-government slogans and chants, also against the Supreme Leader.

In the capital, opposition groups and activists called for support for protesters in Khuzestan. Accepting the call, some citizens of Tehran posted videos last night and this morning of people chanting ‘Down with the Islamic Republic’ in a metro station. During the night, slogans were also heard against the highest state authority, Supreme Leader Ali Khamenei.

“Death to Khamenei” has been a common refrain of Iranian anti-government protesters angered by the authoritarian rule of Supreme Leader Ayatollah Ali Khamenei in recent years. “Reza Shah, bless your soul” also has been uttered in previous waves of Iranian street protests as a sign of affection toward the founder of the nation’s former monarchy Reza Shah. Khamenei’s predecessor, Ayatollah Ruhollah Khomeini, ousted Reza Shah’s son from power in Iran’s 1979 Islamic Revolution.

Iranian state media published what they called interviews with relatives of the two slain men describing their loved ones as being allied with Iran’s pro-government Basij militia. But Iranian social media users said they believed the relatives were coerced into absolving security forces of responsibility for the killings.

Many of the protesters seen in videos from the first two nights of the protests were chanting slogans in Arabic. Khuzestan is home to a significant ethnic Arab minority that long has complained of discrimination and neglect by the rulers of Persian-majority Iran.

But Tuesday’s apparent protest in Izeh, a city that is not predominantly Arab, indicated that the antigovernment protests sweeping Khuzestan are not driven only by ethnic minority grievances.

A group of prominent Iranian rights activists, including Narges Mohammadi, held a rally in front of Iran’s interior ministry in Tehran on Tuesday to express solidarity with the Khuzestan protesters.

Iran’s economy has been crippled partly by sanctions imposed mainly on its oil industry by former US President Donald Trump in 2018, as well as the Covid-19 pandemic. Workers, including thousands in the key energy sector, and pensioners have protested for months, with discontent growing over mismanagement, high unemployment and an inflation rate of more than 50%.

What caused this water shortage?

Iran’s water shortages partly are the result of weather-related factors including a sharp drop in rainfall, which has been more than 40% below last year’s levels in recent months, combined with high summer temperatures.

Now many days the farmers in this region are protesting water scarcity. But the situation is not limited to the of the farmers and the daily life of the people is collapsed having no drinking water. The provincial water and electricity organization is forced to supply water to many villages in the province by tanker, which of course is not enough, and, in many situations, it does not even cover the daily need of one day.

Many people in this province consider the transfer of Khuzestan water to the central plateau of Iran as one of the most important causes of water shortage in their province these days. And mismanagement of water resources added to the drought has made the people of this province become thirsty.

About one-third of the country’s current water resources should flow naturally to Khuzestan province, but since the beginning of the ’80s, various projects have been implemented in Karun and Dez springs, and now a large part of the water of these two rivers is directed to Isfahan and Yazd provinces.

Meanwhile, before the water stress this year, about 700 villages in Khuzestan were supplied with water by tanker, and now, with the drying of the end branches of Karkheh, the number of these villages has exceeded a thousand, which is a clear indication that the thirst of the people has nothing to do with the claims of the government about the drought.

Seyed Ahmad Avaei, an MP, described the transfer of Khuzestan water to the central plateau of Iran as the most important cause of water shortage in his province and said to the state-run news agency Rokna: “Unfortunately, the implementation of water transfer projects from the sources of Dez and Karun began from the government of the late Hashemi. This, of course, was a grave mistake from the beginning, and subsequent governments are continuing to do so.”

Then he confessed about the misuse of this transferred water while he acknowledged that this water is used for agricultural and industrial issues which in many cases are the unnecessary projects lead by the IRGC and said:

“If the officials of the previous governments wanted to provide only drinking water to the people of the central provinces, they could have solved the problem of the people of Isfahan, Yazd, etc. by building pipelines that carry only as much water as the drinking water of these provinces. But unfortunately, the share of water that can lead to the development of Khuzestan has been transferred to the central plateau of Iran for many years for the development of industry and agriculture.”

Many others in this government also criticized this action, including Ahmad Avai, MP from Dezful, who said, “The strategy for the development of these provinces was not the transfer of water from the sources of Karun and Dez from the very beginning, and this measure has led to unbalanced development in the country so that agricultural water and industrial water of the central provinces are often provided, but the people of Khuzestan, especially the farmers of this province, face the water crisis at many times.”

If the Iranian government does not make a drastic change in its water policies, these water shortages will continue and worsen, possibly leading to a further escalation in protests, and subsequent government crackdown.