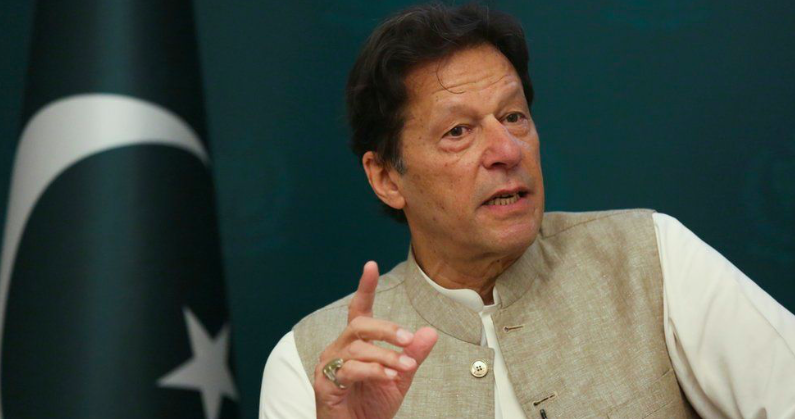 Pakistan Prime Minister Imran Khan said on Tuesday that his country was under pressure from the United States and Western powers over its close ties with China as he vowed to never buckle under that pressure.

Pakistan and China enjoy a “very special relationship” spanning over 70 years and nothing could change these time-tested ties,

Khan said in an interview with English-language state-broadcaster China Global Television Network (CGTN), an excerpt of which was shared on his Instagram account.

Talking about the evolving regional rivalry between the US and China, Khan said that “Pakistan thinks it is very unfair for the US or other powers – western power” to pressurise “countries like us to take sides” in a conflict with China.

“Why should we take sides? We should have good relations with everyone. It is not going to happen if pressure is put on

Emphasising the deep relationship with China, Khan said that Pakistan would never bend under any kind of pressure.

“Whatever will happen, our relationship between the two countries – no matter what pressure is put on us – is not going to change,” he said.

He said that there was a “strange, great rivalry” taking place in the region which was public knowledge.

“You see the United States being wary of China. The way United States and China are looking at each other creates problems because what the United States is doing is it’s formed this regional alliance called the Quad, which is US, India and a couple of other countries,” Khan said.

The Quad or Quadrilateral alliance consisting of the US, India, Japan and Australia has been resolving to uphold a rules-based international order in the Indo-Pacific amid growing Chinese assertiveness in the region.

Pakistan and China enjoy a “very special relationship” spanning over 70 years and nothing could change these time-tested ties, Khan said in an interview with China’s English-language state-broadcaster China Global Television Network (CGTN), an excerpt of which was shared on his Instagram account.

Is the US using Afghanistan to refresh ties with Pakistan?

It appears that the US has attempted to use Afghanistan, and their common concerns with Pakistan about the peace and stability of the waitron country, to their advantage. The US is therefore trying to increase cooperation with Pakistan in the Afghanistan peace process, in order to re-establish working diplomatic and operational ties that could help draw Pakistan closer to the US and away from the East. This strategy has however failed so far.

Pakistan has told the US that it would not give military bases because the country has to look after its own interests, Foreign Minister Shah Mehmood Qureshi said Monday.

The foreign minister was presenting Pakistan’s official stance in response to a US media report related to bases in the country for operations in Afghanistan.

FM Qureshi, in an interview with ‘Aaj Shahzeb Khanzada Kay Sath’, said Pakistan wants a stable Afghanistan, but there are some elements who do not want peace in the region.

“We want to see the peace process going forward along with the withdrawal of troops. The world does not consider Pakistan part of the problem anymore,” he said.

The foreign minister categorically stated that Pakistan has refused to give military bases to the US, adding that he has told all political parties in a briefing that they have no such intention to do so.

“To search for bases could be their wish. There’s no question of [Pakistan] giving them bases, we have to keep in mind our own interests,” he said.

According to an NYT report, the negotiations with Pakistan over the matter had reached an “impasse” for now.

“Some American officials said that negotiations with Pakistan had reached an impasse for now. Others have said the option remains on the table and a deal is possible,” the report said.

The publication said that the rapid withdrawal of US troops has left the agency [CIA] seeking ways to maintain its intelligence-gathering, war-fighting and counterterrorism operations in the country.

The strength of Pakistan-China ties

Responding to a question about how to further deepen Sino-Pakistan ties, Khan said that the two sides enjoyed strong political ties but the relationship was not only limited to official relations but it was also “people to people relationship”.

He said trade was important to increase ties in future and termed the USD 60 billion China-Pakistan Economic Corridor (CPEC) as the “biggest thing happening in Pakistan”.

The CPEC, which connects Gwadar Port in Pakistan’s Balochistan with China’s Xinjiang province, is the flagship project of

Highlighting the 70 years of diplomatic ties, Khan said China always stood with Pakistan, which “always had a very special relationship with China”.

He said that China “always stood with us” whenever Pakistan was in trouble politically or internationally or in a conflict with its neighbour.

“In good times, everyone stands with you but in your difficult, tough times, bad times, you remember those people who stood by you. That’s why you will find that in Pakistan, people always have a special fondness for people in China,” he said.

Recent plans have shown that Pakistan and China are going to turn China-Pakistan Economic Corridor (CPEC) into a model for ecological civilisation aiming at restoration of the natural environment in the region.

According to the details, a joint committee has been formed to work towards ecological civilisation that also comprises Special Assistant to the Prime Minister on Climate Change Malik Amin Aslam.

An official of the climate change ministry said the concept of ecological civilisation would help stimulate green economy, green transportation system and green channels of production in both Pakistan and China.

He said: “The basic aim of ecological civilisation remains reversal of the ecological deterioration from the source, creating a good environment for production and living and making contribution to international ecological safety. It follows the principles of resource conservation, environmental protection and giving priority to the natural restoration of the ecology.”

Under this concept, the goals will be achieved by promoting green development, carrying out recycling activities, and crafting initiatives related to the low-carbon and resilient development. It also requires forming a pattern and industrial structure that is based on resource saving and environmental protection.

The official said when both the countries would pursue the concept of ecological civilisation the economy of China would get a boost and the economy of Pakistan would shift towards a positive change.