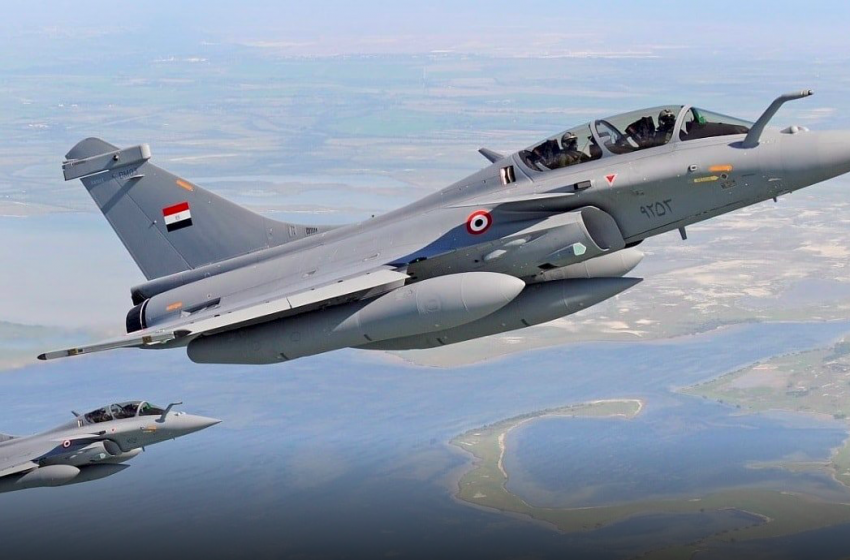 Egypt has signed a contract with France to buy 30 Rafale fighter jets in a deal that investigative website Disclose said was worth $4.5bn, as tensions with Ethiopia over the Renaissance dam deepen. Egypt’s defence ministry revealed the deal in a statement early on Tuesday.

President Emmanuel Macron said in December he would not make the sale of weapons to Egypt conditional on a commitment to respect human rights because he did not want to weaken Cairo’s ability to counter violence in the region.

Egypt’s defence ministry said the deal would be financed through a loan to be repaid over at least 10 years but did not give details about the value of the deal or any other information.

Citing confidential documents, Disclose said an agreement had been concluded at the end of April and could be sealed on Tuesday when an Egyptian delegation arrives in Paris.

This deal would be a further boost for the Dassault-made fighter jet after a $3.01bn agreement was finalised in January for the sale of 18 Rafales jets to Greece.

While Egypt has been buying such sophisticated weaponry from France and other powers for decades, the latest purchase comes around a month after Egyptian president Abdel Fattah el Sisi warned of the risk of conflict over Ethiopia’s giant dam.

“I am telling our brothers in Ethiopia, let’s not reach the point where you touch a drop of Egypt’s water, because all options are open,” said Sisi in April.

Although Egypt and France have enjoyed an increasingly close relationship under the secular rule of former army general el-Sisi, with common interests in the Middle East and a shared suspicion of Turkish President Recep Tayyip Erdogan, the latest purchase, and Egypt’s acceleration of the modernization of its air force through such loan formats, could be directed at the more urgent ‘Ethiopian threat’ that is gradually becoming Egypt’s number 1 foreign policy concern.

Recently, the tensions among Egypt, Sudan and Ethiopia over the Grand Ethiopian Renaissance Dam (GERD) on the Blue Nile have escalated.

The minister was speaking at a meeting of the Foreign, Arab and African Affairs Committee of the Egyptian Senate.

Egypt has a clear position on not impeding development in Ethiopia, but not at the expense of other countries, especially when the situation is related to the waters of the Nile, he said.

Shoukry briefed the Senate’s deputies on the results of his recent African tour, carrying messages from Egyptian President Abdel Fattah El-Sisi to the heads of other African countries about the developments over the GERD.

The minister stressed that there was understanding from other African states towards Egypt’s position.

“The world is witnessing changes, and Egyptian policy is based on strong foreign relations with countries in addition to our pioneering role in the region,” Shukry said.

Egyptian Prime Minister Mostafa Madbouly warned that his country was at risk of suffering from water poverty due to increases in its population.

Negotiations between Egypt, Sudan and Ethiopia over the GERD have so far failed to reach a binding agreement.

Meanwhile, Ethiopia last month accused Egypt and Sudan of working to undermine the African Union (AU)-led process of trilateral negotiations on the rules and guidelines for the filling and operation of the $5-billion Grand Ethiopian Renaissance Dam (GERD).

Ethiopian Foreign Ministry spokesperson Ambassador Dina Mufti in a weekly press briefing said Sudan and Egypt have been on the move to take the negotiations out of the hands of the Pan-African body.

Tensions between Egypt and Ethiopia regarding the dam are therefore at their highest, as both parties are blaming the other for complacency, and Egypt has even threatened Ethiopia with war (indirectly) if it went ahead with the project.

Is there still a way out?

Despite the strong negative trajectory of the Renaissance dam situation, there are still factors that could open up new avenues for a peaceful solution.

Emirati Crown Prince Mohamed bin Zayed has already offered to mediate between Sudan and Ethiopia in their dispute over the Al Fashaqa border region. He is now hoping to use his influence over the Egyptian, Sudanese, and Ethiopian regimes to try to resolve their thorny conflict over the Grand Renaissance Ethiopian Dam.

The United Arab Emirates’ position on the GERD crisis remains unclear, unlike the positions of other Gulf countries such as Saudi Arabia and Bahrain, which issued statements stating their support for Egypt in maintaining its water security.

However, the UAE took a neutral stance without clear bias toward Egypt, as it issued a statement on March 31 calling on “the importance of working through applicable international laws and standards to reach a solution acceptable to all and that secures the rights and water security of the three countries.”

As the GERD crisis escalated, the UAE announced on April 1 sending aid to the Tigray region in Ethiopia. UAE Ambassador to Addis Ababa Muhammad al-Rashidi noted that “the aid comes within the framework of strong relations with Ethiopia.”

However, on April 7, Mada Masr newspaper quoted an Egyptian source as saying that “the UAE offered to the head of the Sudanese Sovereignty Council, Lt. Gen. Abdel Fattah al-Burhan, to separate the Sudanese-Ethiopian file, whether with regard to the borders or the potential repercussions of the GERD, from the Egyptian concern about the repercussions of the GERD on Egyptian water resources,” which weakens the Egyptian-Sudanese alliance against Ethiopia.

Therefore, although the avenue to UAE mediation appears open, Ethiopia’s unwillingness to link its relations with the UAE to GERD, and Egypt’s skepticism about the UAE’s position on the project, could slow down such prospects.

Egypt is currently studying plans to mitigate “possible” risks of the second filling of the Grand Ethiopian Renaissance Dam, the Egyptian Ministry of Water Resources and Irrigation announced on Sunday.

“We have four major plans to mitigate the effects of any potential water crisis,” the ministry’s spokesperson Mohamed Ghanem told Masrawy, stressing that all the scenarios were prepared in the event of “worst possible conditions”.

Ghanem added that the ministry had begun implementing a: “Water rehabilitation project of lining 8,200 kilometres at a total cost of £80 billion ($5.1 billion),” noting that the project would allow water flow at the ends of the lands and reduce waste rates.

“Our second risk plan is the maintenance and construction of 92 water mixing and lifting stations that efficiently operate and drain water, especially during high demand peak times,” he explained.

The official pointed out that the ministry’s third plan was to launch the: “Sahara Al-Mahsama project to discharge one million cubic metres per day, and the Bahr El-Baqar drainage station – the largest in the world treating five million cubic metres per day. In addition, the ministry is planning to inaugurate the new Hammam plant that serves all the new Delta projects,” Ghanem clarified.

It is therefore clear that there are a number of options being considered by Egypt, and not war alone, and that war is almost certainly not at the top of that list. However, Ethiopia’s increasing hostility and insistence on its position regarding the situation, is certainly increasing the likeliness of war, as shown by Egypt’s acceleration of acquisition of modern arms.