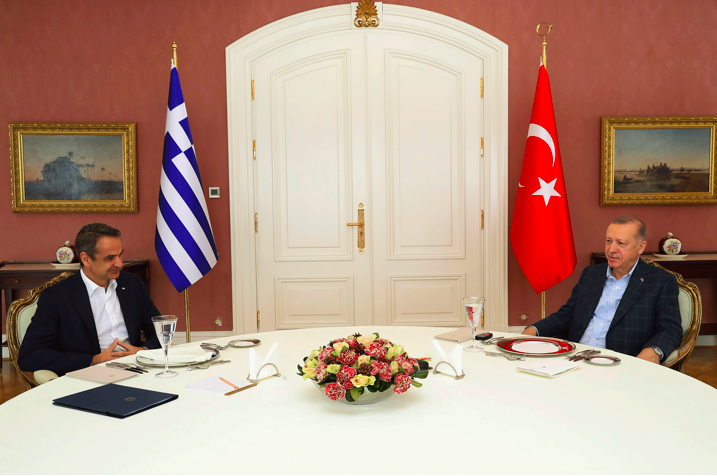 2 weeks ago, Türkiye said Greece used a Russian-made missile system to harass its F-16 fighter jets carrying out a reconnaissance mission in international airspace in what it termed a “hostile action”.

The radar of a Greek S-300 missile system based on the island of Crete locked on to the Turkish jets on August 23, Türkiye’s state-run Anadolu Agency reported on Sunday, citing defence ministry sources.

The F-16s were at an altitude of 3,000 metres (10,000 feet) to the west of Greece’s Rhodes island when the Russian-made S-300’s target-tracking radar locked on, the report added. The Turkish planes completed their mission and returned to their bases “despite the hostile environment”.

That was “incompatible with the spirit of [NATO] alliance” and amounted to “hostile acts” under the NATO rules of engagement, Turkish defence ministry sources told the AFP news agency.

“Despite this hostile action, [Turkish] jets completed their planned missions and returned to their base safely.”

The allegation is the latest claim from Türkiye that its neighbour and fellow NATO member Greece has been targeting its aircraft above the Eastern Mediterranean and the Aegean Sea.

Radar lock-ons are considered an act of hostility under NATO rules of engagement.

The Comoros-flagged “Anatolian” ship with a crew of 18 – six Egyptians, four Somalis, five Azerbaijanis and three Turkish nationals – was attacked while sailing in international waters, the Turkish Coast Guard Command said in a statement.

After learning about the incident, the Turkish coast guard dispatched two boats and the Greek boats left the area.

No one was injured on the ship, it added.

Diplomatic sources said that an explanation and investigation into the incident “that is totally in violation of international laws” has been demanded from Athens and protested.

Emphasizing continuing provocations by Greece, Ankara on Monday warned Athens against undertaking an adventure on behalf of others, News.Az reports citing Anadolu Agency.

“As we try to respect our neighborly rights on both sides of the Aegean, Greece still continues its provocations. If you embark on an adventure on behalf of others, you will suffer the consequences today as did in the past. This is a warning to our neighbor Greece,” said Foreign Minister Mevlut Cavusoglu at a symposium on the Battle of Sakarya.

The Turkish foreign minister called on Greece to not be a “tool” of others, and to end its provocations.

More alarmingly, Turkish President Recep Tayyip Erdogan urged Athens on Saturday to look at history, saying: “If you go too far, the price will be heavy.”

“Greece, look at history, go back in time; if you go too far, the price will be heavy. We have one thing to say to Greece: Remember Izmir,” Erdogan said at Türkiye’s largest technology event, Teknofest, in the province of Samsun on the Black Sea coast.

Izmir is a province on Türkiye’s western Aegean Sea coast that Ankara liberated from Greek occupation in 1922 as part of its War of Independence.

Erdogan warned Greece, saying that Athens’ “occupation” of Aegean Sea islands “is not our concern.”

“When the time comes, we will do what is necessary. As we say, all of a sudden, we can come overnight.”

Unless Greece escalates the situation further, or Türkiye attempts to provoke a further escalation, an armed conflict appears unlikely in the upcoming months. Both countries have suffered economically from the war in Ukraine, and are not in a state to enter an armed conflict. The fact that both countries are in NATO is also an important factor that would prevent armed escalation.

Greece’s prime minister says that he cannot imagine that tensions with neighboring NATO ally Türkiye could ever escalate into armed conflict.

Asked by The Associated Press whether a recent escalation in rhetoric from Türkiye, led by President Recep Tayyip Erdogan, could be the prelude to an armed conflict, Mitsotakis replied negatively.

“I don’t believe this will ever happen. And if, God forbid, it happened, Turkey would receive an absolutely devastating response. And I think they know it very well. Turkey knows the competence of the Greek (armed) forces,” he said.

Erdogan has accused Greece of occupying supposedly demilitarized islands in the Aegean Sea and has threatened that Turkey would take action.

Mitsotakis added that, despite Erdogan’s “unacceptable” comments, he was still open to dialogue and a meeting with him.

Mitsotakis linked Greece’s unequivocal support for Ukraine to concerns that, if Russia prevails, it could serve as an example to other countries with expansionist designs.

Türkiye’s threats remain real, but it is likely that dialogue will be prioritized should this tense situation continue, both from the Greek and Turkish sides.