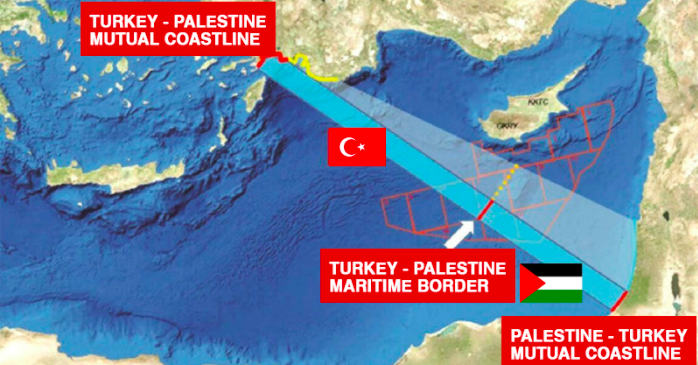 Turkey’s Yeni Safak newspaper yesterday called for Turkey to implement a maritime zone agreement by signing a deal with Palestine to get access to water and energy rights off Palestine territory.

According to report, Turkey should sign a maritime jurisdiction agreement with the besieged Gaza Strip, similar to the one it made with Libya to strengthen Palestinians’ hand in the international sphere and provide motivation for other countries to sign deals with them.

Gaza has been under a land, sea and air blockade by Israel for 14 years, while the Palestinian Naval Police’s activities are restricted to 11 kilometres from the enclave’s coast.

“By signing such an agreement, the Palestinian people would obtain control over a 10,200 square kilometer maritime zone, which would pave the way for them to utilize all the resources at sea,” Professor Cihat Yayci, a former Turkish navy rear admiral and head of the Maritime and Global Strategies Center at Bahcesehir University, told the Turkish Daily Sabah newspaper.

He continued by noting that the deal would also allow Turkey to expand its maritime jurisdiction zone in the Mediterranean, spoiling Greece and the Greek Cypriot administration’s plans in the area.

According to Yayci, such a deal would also mark the first time Palestine signs an agreement with a world power and would significantly contribute to its formal international recognition and motivate the Palestinian Authority (PA) and other states to make deals.

In 2019, Turkey signed a maritime agreement with Libya through which Ankara aimed to reassert its maritime boundaries, angering Greece and Egypt in the process.

Greece trying to stop it

Greek Foreign Minister Nikos Dendias is rushing to Israel and the Palestinian territories on Tuesday as part of an effort to pre-empt developments such as those that led to the Libya-Turkey maritime border memorandum.

Athens has been alerted of a reported plan for the demarcation of exclusive economic zones between Turkey and the Gaza Strip. His decision to travel to Jerusalem, Tel Aviv and Ramallah was made after consultations with Prime Minister Kyriakos Mitsotakis, at a time when Turkish President Recep Tayyip Erdoğan is seeking to present himself as a lone defender of the Palestinians amid the escalating tensions between Israel and the Gaza Strip. Meanwhile, Ankara is pressuring the fragmented Palestinian authority to demarcate the EEZ off the coast of Turkey opposite the Greek island of Kastellorizo.

Such an outcome would not only create serious problems for Greece and Cyprus, whose jurisdiction such a demarcation would violate, it would also be the final nail in the coffin of the efforts for an Israel-Turkey rapprochement.

It was initially agreed that Dendias would meet his Palestinian counterpart Riyad al-Maliki in Ramallah. However, al-Maliki withdrew, reportedly arguing that Athens is friendly to Israel and completely ignores the Palestinian positions.

Dendias’ visit to the region was initially planned in consultation with Egyptian Foreign Minister Sameh Shoukry as Athens wanted to be in full harmony with the main Arab player in the region, Egypt.

Dendias, the first official of an EU member-state to visit the region after the start of the conflict, will also participate in urgent video talks between European Union foreign ministers on developments in the region.

On the same day, Dendias will travel to Jordan for talks with Foreign Minister Ayman Safadi, while on Thursday he will visit Cairo.

Meanwhile, the Libyan-Turkish Maritime deal continues to function, and the new Libyan intermediate government has embraced the deal.

“We disagree with Greece in evaluating the Libyan-Turkish maritime agreement that serves the Libyans, and [therefore] we will not abandon it,” he said.

On Nov. 27, Ankara and Tripoli reached two separate memorandums of understanding (MoU), one on military cooperation and the other on maritime boundaries of countries in the Eastern Mediterranean.

The Libyan premier also commented on the foreign mercenaries in the country, saying that “there are good signs” of getting them out of Libya.

Over the past years, warlord Khalifa Haftar contracted mercenaries from various countries, most notably the Russian Wagner company, to aid him in military operations against the internationally recognized government based in Tripoli, which ended in failure.

Dbeibeh explained that his government has been successful in uniting about 80% of Libya’s state institutions except the military institution.

The deal’s success therefore could have motivated Turkey to form a similar deal with Palestine, which could enhance Turkey’s maritime benefits in the region.