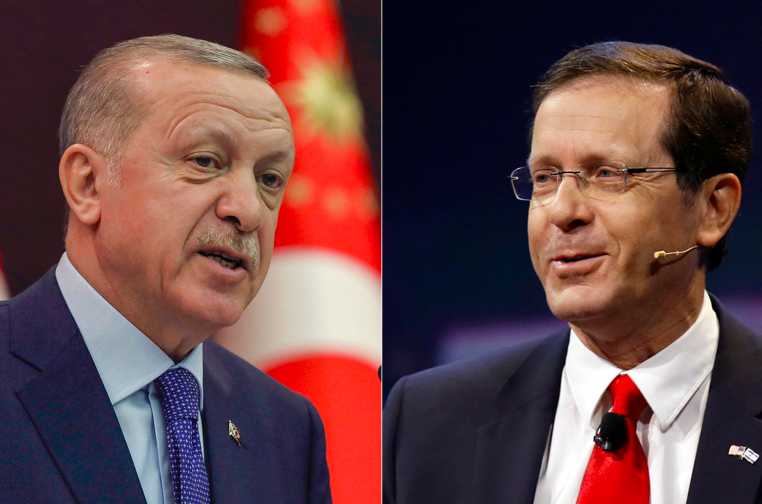 Turkish President Recep Tayyip Erdogan has spoken with his new Israeli counterpart Isaac Herzog, in a sign of a possible thaw between the two former allies after years of frosty relations.

The rare telephone talks between the two countries on Monday came after Erdogan, a vocal champion of the Palestinian cause during his 18-year rule, held talks on Saturday with Palestinian Authority President Mahmoud Abbas.

During that meeting, Erdogan told Abbas that Turkey would “not remain silent to Israel’s oppression in Palestine,” according to the Turkish presidency.

Israel and Turkey were once close regional partners but relations between the two countries soured in the past 10 years. The Turkish government frequently criticises Israel’s policies towards the Palestinians.

However, during his call with Herzog, Erdogan emphasised the “great importance” of Turkey-Israel ties for security and stability in the Middle East, the Turkish presidency said.

Erdogan also underlined Turkey’s emphasis on continuing dialogue despite differences of opinion, it added in a statement. The Turkish presidency said there was strong potential for cooperation between the two countries in fields including energy, tourism and technology.

According to a statement by the Israeli president’s office, Herzog and Erdogan said that “ongoing dialogue despite all the differences of opinion” was important, particularly for advancing steps towards a two-state solution between Israel and the Palestinians.

Herzog took office last week after he was elected by the Knesset, Israel’s parliament, in a June vote. He spoke Saturday with neighbouring Jordan’s King Abdullah II after Israel and Jordan agreed to initiate negotiations for the sale of water to the Hashemite kingdom.

Erdogan had late last year expressed a desire to see relations between Turkey and Israel improve, after years of disagreement over Israel’s occupation of the occupied West Bank and its treatment of Palestinians.

Despite this evident intent of Turkey to change the negative trajectory of Turkish-Israeli ties, significant obstacles remain in this regard.

Turkey strongly condemned Israel for destroying Palestinian families’ homes in the Humsa al-Fawka village northeast of West Bank, saying that the displacement of Palestinians, including children, amounts to the violation of international law.

In a written statement, Turkey’s Foreign Ministry called the razing of homes and the displacement of 70 people, including 35 children, in Humsa al-Fawka an unacceptable example of bullying and a violation of international law.

Reminding that Israel has already displaced 592 Palestinians and destroyed 421 buildings in 2021, the ministry said the Tel Aviv administration disregards international calls to halt demolitions and aims to turn occupation into annexation.

The Israeli government approved the construction of new settler units in late 2020.

Peace and stability in the region will not be possible as long as the Israeli occupation continues, Erdoğan stressed, saying Turkey did not and will not remain silent about Israel’s atrocities in Palestine.

A more direct obstacle to the development of Israeli-Turkish relations is the two powers’ increasingly conflicting interests, especially in the Mediterranean.

Tensions are rising in the eastern Mediterranean. Turkey’s sparring with Israel is combining with its conflicts with Saudi Arabia and its partners, and is increasingly drawing in other countries—from Libya to Greece, and maybe soon the United States. Just a few months ago, and now reappearing, there appeared to be signs of rapprochement between Turkey and Israel, but that now seems unlikely.

Perhaps more than anything else, what concerns Turkey the most about this competition is its rapid expansion to Turkey’s strategic underbelly: the eastern Mediterranean corridor. Diplomatic, economic and military relations between Greece, Israel and the Arab states of the CRB have grown exponentially as part of the broader struggle to shape the post-2011 regional order.

Particularly alarming for Ankara is the eastern Mediterranean pipeline project, or EastMed. The project is an agreement signed by Greece, Cyprus and Israel to transport gas from Israel’s Leviathan gas field to Greece and mainland Europe, passing through Cyprus. Designed to circumvent Turkey and undermine its efforts to become an energy hub linking Europe and Asia, EastMed has also been endorsed by Egypt and the UAE, with the latter investing in the project.

Meanwhile, Israel’s new government has shown no signs of changing the oppressive policies towards Palestinians in the West Bank and Gaza.

Israeli forces opened fire on hundreds of Palestinian demonstrators who rallied against an illegal outpost in the occupied West Bank on Friday, with more than 370 people wounded including 31 hit by live ammunition.

Drones dropped tear gas canisters and smoke filled the air at the scene of the protest in the West Bank town of Beita, near Nablus, where Palestinians protested illegal land confiscation.

The Palestine Red Crescent reported 379 protesters were wounded – 31 by live ammunition. There was no immediate comment from the Israeli military.

Similar confrontations were also witnessed in the town of Kafr Qaddum and in Beit Dajan, where dozens of Palestinians were treated for the effects of tear gas.

The Israeli army also suppressed a protest against the settlements in the Masafer Yatta area in Hebron.

Israeli and Palestinian estimates indicate there are about 650,000 settlers in the occupied West Bank, including East Jerusalem, living in 164 settlements and 116 outposts.

Under international law, all Israeli settlements in the occupied territories are illegal.

Tensions in the occupied West Bank reached new highs in the past months with the Evyatar settlement being one of the focal points of clashes, as settlers refused to evacuate the land and Palestinians fiercely demonstrated against their presence.

As Israel’s aggressive policies towards the Palestinians accelerate, it is hard to imagine Turkey strengthening ties with the former, if they are to be consistent with their earlier statements.