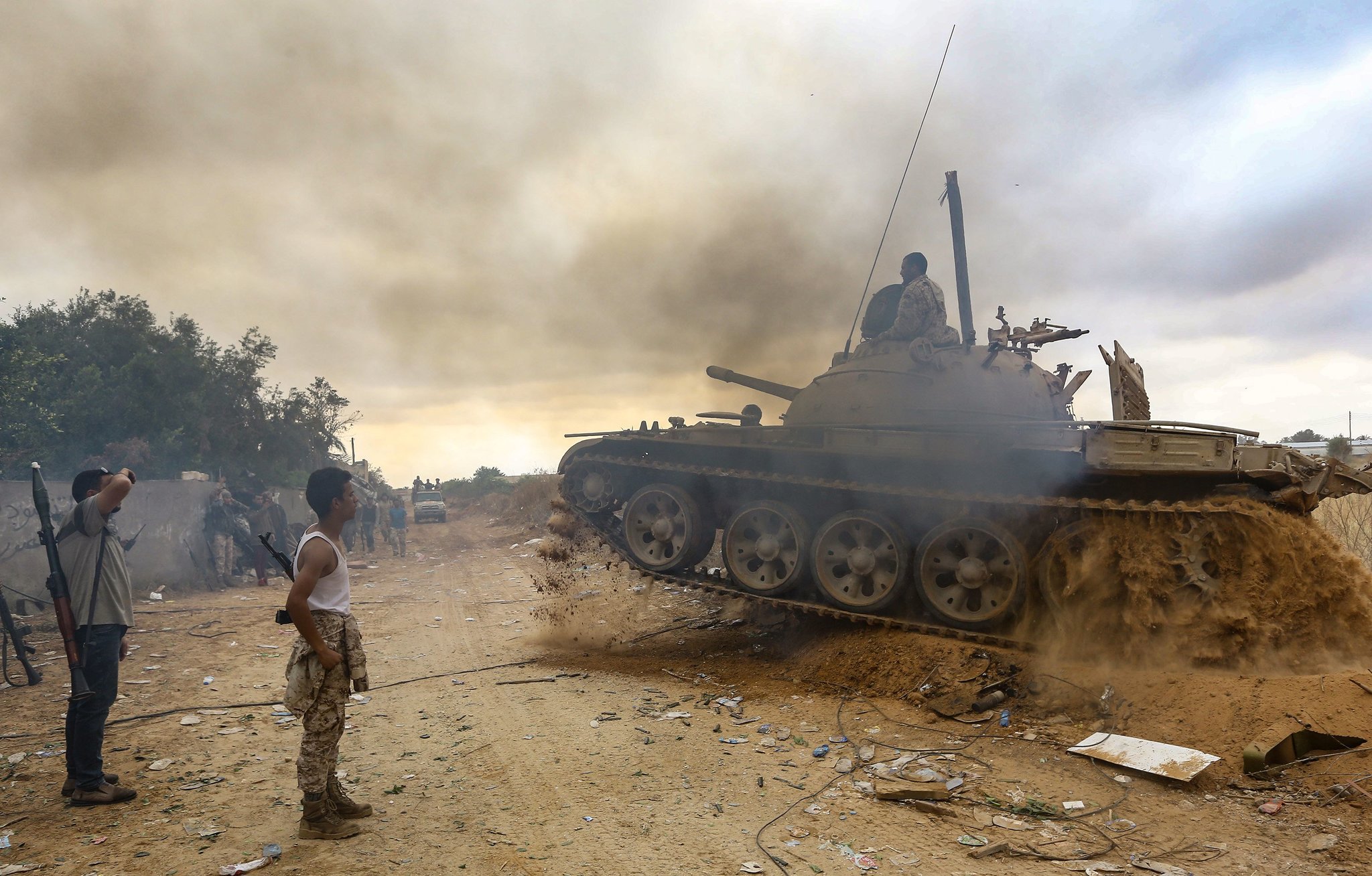 Fighters loyal to the Government of National Accord on the frontline during a clash with Khalifa Hifter’s forces in June.Credit…Mahmud Turkia/Agence France-Presse — Getty Images

Fighters loyal to the Government of National Accord on the frontline during a clash with Khalifa Hifter’s forces in June.Credit…Mahmud Turkia/Agence France-Presse — Getty Images

Turkey is laying claim to a huge chunk of the eastern Mediterranean – an area that includes large reservoirs of natural gas that Egypt, Israel and Cyprus are racing to exploit. Last month Ankara signed a maritime delimitation agreement with Libya’s internationally recognized government in an attempt to gain control over the energy rich area. Greece said any such accord would be geographically absurd because it ignores the presence of the Greek island of Crete between the coasts of Turkey and Libya. In the near future, Turkey might send its troops to Libya to back Government of National Accord, while Greece and several other countries are expected to strongly support Field Marshal Khalifa Haftar and his Libyan National Army.

Will Turkey Deploy Troops to Libya?

Following the killing of the Libyan leader Muammar Gaddafi in the NATO-backed uprising in late 2011, the country has descended into chaos. Since 2014, Libya has been mainly controlled by two rival groups – the UN-recognized, Tripoli-based Government of National Accord (GNA) in the northwest, and the Tobruk-based elected parliament in the east that has loyalty of the Libyan National Army (LNA). Turkey strongly backs Libya’s internationally recognized government and has said it could deploy troops there if it receives such request. Even though Fayez al-Serraj’s Government of National Accord has not yet asked Turkey to send its forces to Libya, President Tayyip Erdogan recently said that Turkey would increase its military support to Libya if necessary and would evaluate ground, air and marine options.

Libya’s Tripoli-based government has been fighting off a months-long offensive by Khalifa Haftar’s forces based mostly in the east of the country. Haftar’s Libyan National Army has received support from Russia, Egypt, Jordan and the United Arab Emirates. According to LNA’s spokesman Ahmed al-Mesmari, Turkey has already become directly involved in the battle for Tripoli with its soldiers, planes, sea ships and all the supplies that now reach Misrata, Tripoli and Zuwara. He said Turkey had helped push the LNA out of the town of Gharyan, about 100 kilometers from Tripoli. The town was a key supply route for Hiftar’s forces pushing toward the capital.

Without vastly increased Turkish involvement, Libyan National Army might eventually defeat The Government of National Accord forces. According to Cahit Armagan Dilek, director of the Ankara-based 21st Century Turkey Institute, sending some troops would not be enough to block Haftar’s forces, but such move would make Turkey actively involved in Libya’s civil war. The Turkey-backed GNA currently controls a very small portion of the Libyan territory along the Mediterranean. As a comparison: Syria’s President Bashar Assad also controlled a very small portion of the country before Russia actively got involved in the Syrian civil war. Almost five years after Russian military intervention Syria, Bashar Assad and his government control around 70 percent of the country. If it aims to gain full control over the gas reservoirs in Libya, Turkey would need to use similar tactics that Russia is using in Syria. In other words, Ankara would need to deploy its troops in order to make sure GNA prevails. Russia, on the other hand, said it was very concerned about Turkey’s potential troop deployment in Libya, adding that the military accord between the two countries raised questions. Russia and Turkey are enemies and allies at the same time. Even though they support different sides in civil wars in Libya and Syria, the two countries actively trade, negotiate, build pipelines and aim to redistribute natural resources in the Middle East.

Some analysts argue that Turkish interests in Libya are ideological and geopolitical, as Ankara apparently has neo-Ottoman ambitions in the region. In reality, Turkey’s interests are mostly geoeconomic. Turkey’s economy has been in freefall over the past two years and Libya represents a key opportunity for licit and illicit gains. The maritime agreement is expected to enormously benefit Turkish offshore gas interests. Although the agreement has already sparked a backlash from Greece, Cyprus, and Egypt as it attempts to grant Turkey rights to natural gas in territorial waters claimed by those nations, it is extremely unlikely that any of these countries will fight a direct war with Turkey. Israel, one of the nations that also has key interests in the Mediterranean, also opposes the accord. However, the country’s Foreign Minister Israel Katz recently said that it does not mean Tel Aviv will send battleships to confront Turkey. Although usually seen as backers of the GNA and of Turkey’s crucial position within NATO, the State Department and the Foreign and Commonwealth Office have also spoken out against the maritime agreement. In spite of that, Turkey may get militarily involved in Libya with Washington’s encouragement behind closed doors.

If that happens, it would not be improbable for Greece, Russia, Egypt and The United Arab Emirates to provide strong support to general Haftar and Libyan National Army. Libya has been mired in two distinct rounds of civil war with various Libyan factions serving as proxies for regional and international players, each trying to secure its own interests.

According to reports, Greece, Israel, and Cyprus are getting closer to a deal on a pipeline that would carry natural gas right through those disputed waters, via Crete, to Greece and Italy. Recently, the three countries said they could formalize an intergovernmental agreement on the EastMed pipeline as soon as January 2, though Italy has not yet indicated that it will sign the accord, as Rome still backs the Tripoli-based government.

It is worth mentioning that on 22 December 2019, Greek Minister of Foreign Affairs, Nikos Dendias, travelled to Benghazi to meet the ministers designated by the Tobruk House of Representatives and their military leader, Field Marshal Khalifa Haftar. He then moved on to Cairo and Cyprus. On the other hand, Turkish President Erdogan recently traveled to Tunisia to meet with his counterpart Kais Saied. The two leaders reportedly discussed steps for a ceasefire in Libya and a return to political dialogue. Since Erdogan was accompanied by the Turkish defense minister, foreign minister and intelligence chief, among others, some analysts believe that Ankara is actually trying to assure flawless arm supplies to LNG via Tunisia’s territory.

In any case, there are indications that NATO members Greece and Turkey started preparations for a proxy war in Libya. The two countries are already at odds over various decades-old issues ranging from mineral rights in the Aegean Sea to ethnically-split Cyprus. Turkey is competing with the Republic of Cyprus and Greece for sovereignty over waters in the eastern Mediterranean to secure access to, and rights over, oil and natural gas reserves.

Libya is a country that has rich oil and gas reserves, and it borders important Mediterranean trade routes. As such, it will unlikely be allowed to establish sovereignty and have full control over its natural resources. Instead, it already became a battlefield for proxy wars, and situation will likely worsen in the future. In spite of that, oil and gas productions goes flawless. The only question is which foreign power will benefit for the exploitation.

Athens says the deal that Turkey signed with the Tripoli-based government violates international law, but Ankara claims it aims to protect its rights in the region. In reality, there is no such thing as international law. The law of the strongest is what prevails. It remains to be seen which side will prevail in the Libyan conflict, and how major powers will redistribute the country’s natural resources.