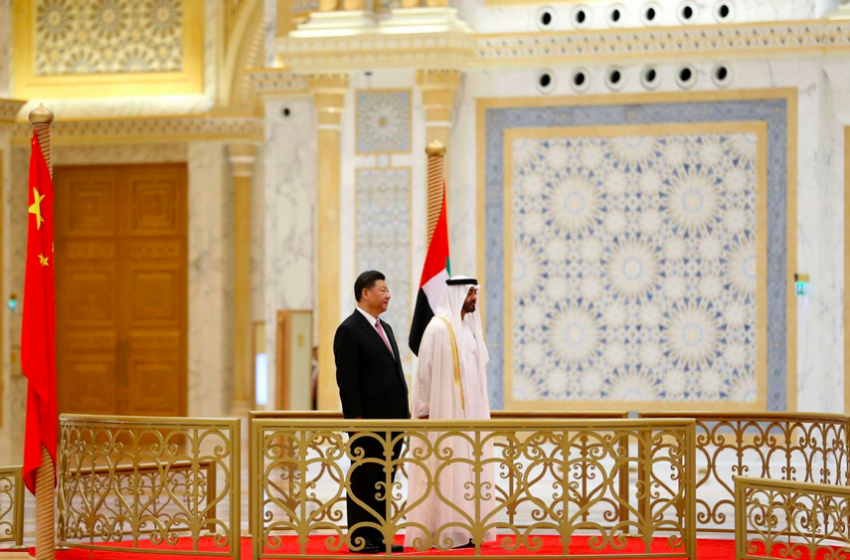 The UAE’s growing ties with China

The UAE and China have steadily been growing ties in recent years, and the Covid 19 outbreak in 2020 has accelerated this process, largely due to China’s vaccine diplomacy.

The effects of this can be seen in the UAE’s reaction to China’s oppression of Muslim Uighurs in Xinjiang.

There are justifiable fears that their relations with Beijing would suffer if they condemned the repression of the Uyghurs. Virtually all Muslim-majority countries have strong relations with China, which have significantly deepened in the past few decades. Chinese Foreign Minister Wang Yi’s tour of the Middle East in late March underscored these growing ties.

Given its own concerns about the perceived threat of Islamist activism, the UAE has been particularly supportive of China’s “Strike Hard” campaign in Xinjiang. When the UAE’s de facto ruler, Mohammed bin Zayed, visited Beijing in July 2019, President Xi Jinping thanked him for his country’s “valuable support” when it comes to Xinjiang. Mohammed bin Zayed told Xi that the UAE would be willing to work with China to “jointly strike against terrorist extremist forces.”

In March 2021, visiting Chinese State Councilor and Foreign Minister Wang Yi held a meeting with his counterpart of the United Arab Emirates (UAE) Sheikh Abdullah bin Zayed al-Nahyan, during which the two sides agreed to deepen cooperation in varied fields.

Noting that the two peoples are “good friends, good partners and good brothers,” Wang stressed that the relations between China and the UAE are based on high level of mutual trust and deep-rooted traditional friendship. The strong friendship and mutual trust between the heads of the two states provide a solid guarantee for the continuous development of the China-UAE relations.

China supports the UAE in safeguarding its national security and stability, independently exploring a development path in line with its own national conditions, combating religious extremism, and playing a positive role in international and regional affairs, Wang said.

He said that China appreciates the UAE’s strong support on the issues concerning China’s core interests.

The phase-3 trial of the COVID-19 vaccine, jointly carried out by China and the UAE, has set a record for multi-nationality and large-scale clinical trials, and made important contribution to promoting international anti-coronavirus cooperation, the Chinese diplomat said, adding that China is willing to continuously innovate the models and expand the scope of cooperation with the UAE.

Wang said that China is willing to work with the UAE to enhance connectivity of the Belt and Road Initiative and the UAE’s 50-year national development plan, expand mutually beneficial cooperation in such fields as energy, high and new technologies, finance and investment, and jointly promote international mutual recognition of health code.

The two sides also need to strengthen cooperation in anti-terrorism and de-radicalization, Wang said, adding that China will offer full support for the UAE to host the World Expo in Dubai and will work with all parties to ensure the success of the 2022 Beijing Winter Olympic Games.

China and Arab states have reached an agreement on jointly proposing a data security cooperation initiative, indicating that both sides are willing to actively participate in formulating the rules of the global digital economy, the Chinese diplomat said.

Unsurprisingly, the US is increasingly worried about this increased Chinese presence in the Gulf, and specifically in the UAE.

U.S. spy agencies in recent weeks watched as two planes belonging to China’s People’s Liberation Army landed at an airport in the United Arab Emirates and unloaded crates of undetermined materiel, according to U.S. officials who have seen the intelligence.

The transport flights, along with other signs of nascent security cooperation between Beijing and the U.A.E., a major U.S. ally in the Gulf region, have alarmed U.S. officials and cast fresh uncertainty over a multibillion-dollar sale of advanced U.S. weapons to the Emirates, the officials said.

The Biden administration said in April following a review that it would move forward with a $23 billion sale of as many as 50 F-35 fighter aircraft, 18 Reaper drones and advanced munitions, all approved in former President Donald Trump’s final hours in office.

But signs of expanding ties between Beijing and Abu Dhabi have clouded the sale’s future, U.S. officials said, as they seek guarantees about the weapons, including that the Emirates won’t allow the Chinese or others access to the latest American war-fighting technology.

The UAE has wanted the F-35 for several years and expected to obtain it after establishing diplomatic ties with Israel in August 2020. Israel typically gets a five-year head start over other U.S. allies in the Mideast when buying new weapons.

But despite its approval, the Biden administration is still negotiating the terms of the agreement. Talks are focused on U.S. requests that Israel maintain its quantitative military edge, that U.S. weapons aren’t used in Yemen and Libya, and most importantly, that China and other third-party countries don’t have access to the F-35 and Reaper technology, according to a Wall Street Journal report.

Israeli Prime Minister Benjamin Netanyahu and Defense Minister Benny Gantz have said publicly that they will not oppose the sale of the weapons to the UAE.

But the UAE’s growing ties with China could sink the deal. The People’s Liberation Army has sent equipment to the UAE, raising concerns that China could be building a base in the country, sources told the Journal.

An official told the media outlet that Washington has said that allowing China to build a base in the UAE would terminate the weapons deal. But the official added that the U.S. and UAE might not agree on what a “base” entails.

Will the US really act?

Although the US has already shown signs that it takes the UAE’s growing ties with China very seriously, the UAE’s geopolitical importance, especially after its normalization of ties with Israel, will reduce the likeliness of the US taking any hostile actions towards the Gulf state. The US will probably attempt to take the route of negotiations, attempting to diplomatically solve this issue. But if this does not work, it is not out of the question that the US will use the F35 sales as a tool to pressure the UAE to tone down its ties with China. The worst possible scenario would be the US cancelling the F35 sale to the UAE, just like it did with Turkey, which would be a big blow to relations, and the regional dynamics, but would not amount to sanctions.

Pointing towards this, the UAE has continued to cooperate with the Biden administration on all levels in recent months, despite the acceleration of ties with China. Foreign Minister of the United Arab Emirates Sheikh Abdullah Bin Zayed Al-Nahyan held talks late Monday with US Secretary of State Antony Blinken over the telephone and discussed means to boost security and stability in the Middle East, in light of the Israel-Hamas ceasefire agreement, the UAE’s state news agency WAM reported.

During the phone call, Sheikh Abdullah and Blinken talked about the importance of establishing trust between Hamas and Israel, and finding a comprehensive solution to ensure lasting peace and a better life for their peoples, commending the tireless efforts that led to the ceasefire, according to the WAM report.

In a statement, the US Department of State said the US secretary of state and the UAE’s foreign minister expressed their support for the ceasefire between Israel, Hamas, and other parties in Gaza.

Blinken thanked the Foreign Minister for the UAE’s efforts to de-escalate the conflict and discussed the need to explore new paths to achieve peace. The Secretary also raised the importance of reconstruction efforts in Gaza, the statement added.

According to the WAM report, the two top diplomats also highlighted the solid strategic relations between the UAE and the US, and the expanding the bilateral cooperation in all fields.

Sheikh Abdullah underscored the deep UAE-US bilateral ties and the joint efforts they made to achieve stability and maintain peace and security around the world.

He further asserted the UAE’s unwavering commitment to maintain security and stability in the region and support international efforts towards that goal, pointing out that such stability is the foundation stone of sustainable development.

Sheikh Abdullah concluded by praising the US’ support of the Abraham Accords and their efforts to highlight its key role in ensuring stability and achieving peace, expressing his hope for a brighter future built on tolerance and coexistence in the region.

It is therefore clear that the UAE has become an integral part of the US and Israel’s geopolitical plans in the Middle East. In addition to this, the likely election of a hardliner president in Iran would severe US-Iran ties, making the UAE even more important in countering the Iranian threat.

Hence, as we have mentioned in previous articles, it appears the UAE is well aware of the importance it holds in the eyes of the US and Israel, and is using this leverage to pursue an independent foreign policy, which includes not only Russia, but also China. This strategy that the UAE has been pursuing in recent years, is quite unique in the Gulf, and is making the UAE an increasingly important, and unpredictable piece of the geopolitical puzzle in the Middle East.