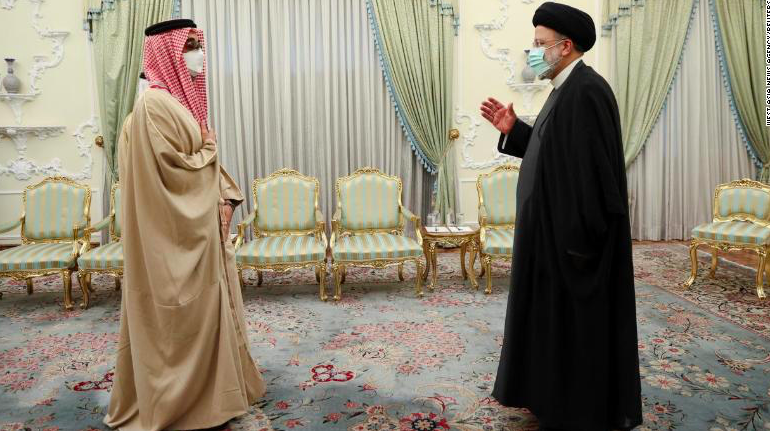 In line with the UAE hard work to fix relations with Iran and as part of a previous move to rise diplomatic representation to the rank of diplomat, the UAE Foreign Ministry said on Sunday that Saif Mohammed Al Zaabi has been selected as the new Abu Dhabi representative to Tehran.

The UAE Foreign Minister Sheikh Abdullah bin Zayed Al Nahyan and his Iranian counterpart Hossein Amir Abdollahian made a phone call was in this regard on July 26.

The UAE Ambassador to Tehran is going to continue his responsibilities in the coming days, as stated in an announcement released by the UAE Foreign Ministry.

It also indicated that “This comes in coordination with the Ministry of Foreign Affairs of the Islamic Republic of Iran in line with diplomatic norms governing bilateral relations.”

The ministry as well confirmed that Ambassador Al Zaabi is going to continue doing his duties at the UAE embassy in Iran “to contribute to further advancing bilateral relations in cooperation with officials in the Islamic Republic of Iran to achieve the common interests of the two countries and the wider region.”

Though Riyadh and Abu Dhabi want an end to Tehran’s moves in the region, they also want to contain the tensions as they focus on economic priorities.

The UAE has business and trade ties with Iran stretching back more than a century, with the emirate of Dubai long being one of Iran’s main links to the outside world.

The decision to return the ambassador “comes within the UAE’s regional orientation towards restoring bridges, strengthening relations, maximizing on what we share and building on it to create an atmosphere of trust, understanding and cooperation,” tweeted Anwar Gargash, adviser to the UAE president.

The UAE is now the top exporter to Iran with bilateral trade rising to $21.4 billion in four months from March this year, from just $7 billion for all of 2019, according to Reuters.

The current mending of ties between the UAE and Iran runs in contrast to the US’s increasingly tough and skeptical stance towards Iran in the ongoing nuclear talks, under Israeli pressure.

If the talks fail, observers say regional tensions could escalate as they did when then-US President Donald Trump withdrew from the agreement, potentially dragging the region to war. For Gulf states, both scenarios are a cause for concern.

A senior US administration official told CNN on Friday that Iran had dropped a key “red line” demand that had been a major sticking point in efforts to revive the 2015 nuclear deal. The Iranians also dropped demands related to delisting several companies tied to the country’s Islamic Revolutionary Guard Corps (IRGC), the official said. Iran on Monday said the US had “not yet responded to the proposals of the European side” and accused the US of “procrastinating” in talks.

The White House says the reason a deal is now getting closer is that Iran has made significant concessions. But the Israeli side has been concerned the U.S. might soften its own positions to get the deal across the line.

However, the United States on Monday issued fresh sanctions on Iran, this time targeting Chinese and other companies it said were used by one of Iran‘s largest petrochemical brokers to facilitate the sale of tens of millions of dollars’ worth of Iranian petroleum and petrochemical products from Iran to East Asia.

According to the Treasury website, the US slapped sanctions on the United Arab Emirates among other countries . Monday’s move is the latest shot in the US’s stepped-up campaign to enforce sanctions aimed at reducing Iran’s oil and petrochemical revenue.

The UAE’s normalization of ties with Tehran is nothing new, as this process has been ongoing for several months. The warming of diplomatic ties comes after the UAE normalised ties with Israel in September 2020. Three other Arab countries – Bahrain, Sudan and Morocco – also forged diplomatic relations with Israel under the so-called Abraham Accords brokered by the United States.

Even as the UAE normalised relations with Tehran’s regional foe, Emirati officials have escalated efforts to boost trade relations with Iran and reduce the threat from its regional proxies.

However, Israel’s increasingly hostile stance towards Iran in recent months could make the UAE’s reapproachment with Iran problematic for its ties with Israel.

While in the short term a fully-fledged Arab-Israeli partnership against Iran remains unlikely, Israel is working hard to build a stronger regional consensus and commitment to the common objective of checking Tehran’s military capabilities.

Criticizing the United States for rushing into a terrible deal, Mossad Director David Barnea said on Thursday that a new nuclear pact with Iran would not block his agency from acting against the Islamic Republic to protect Israel’s security interests.

Barnea made the comments in a marathon of private meetings he held with Prime Minister Yair Lapid and other top government officials on Thursday.

“Israel has not signed on to the deal. Israel is permitted to defend itself in any way possible – and will act this way. We cannot sit quietly and just watch as the danger grows closer,” Barnea, who took over as spy chief in June last year, told them.

t seemed that Barnea’s feeling that a new deal was imminent led him to express his views forcefully and they are also expected to be relayed to the US.

In his meetings, Barnea dealt with the question of why the US would be more in favor than Israel of accepting what he called a dangerous deal, even though some of its forces in the Middle East could come into Iran’s crosshairs.

Further, he said that he was “gravely concerned” about the “hundreds of billions [of dollars]” that would be given to a “state sponsor of terrorism, which both destabilizes, and sponsors terror in the region, including militias, Hezbollah, the Houthis and Islamic Jihad in Gaza,” if sanctions are lifted.

Although for now Israel is not applying the same scrutiny to the UAE, most probably to maintain the positive atmosphere of the ties the two established, should the UAE continue strengthening economic ties with Iran, Israel could start pressuring the UAE to reverse this trend, whether the nuclear deal gets concluded or not.