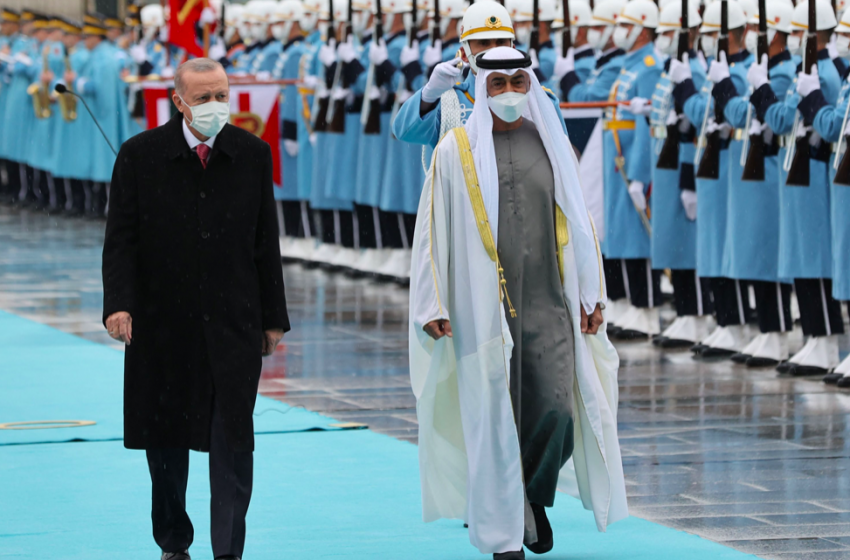 The visit by the crown prince, seen as the de facto leader and the force behind the UAE’s foreign policy posture, was his first official trip to Turkey since 2012, and the highest-level visit by an Emirati official since relations hit a low as the countries have battled for regional influence and backed opposing sides in conflicts. The crown prince’s brother, the UAE national security adviser Tahnoun bin Zayed Al Nahyan, visited Turkey in August as the first major step toward mending strained ties.

A statement from the Turkish president’s office had said the two leaders would discuss bilateral ties as well as steps that can be taken to expand cooperation. They would also exchange views on regional and international developments.

Turkish officials described MBZ’s visit as the “beginning of a new era” following years of hostility after Ankara blamed the UAE for financing the 2016 coup plotters in Turkey and undermining Turkish interests in Libya.

Ahead of the visit, one source familiar with the preparations for MBZ’s visit stated that there has been an increasing Emirati interest in Turkish defense companies, which have established lucrative opportunities with domestic production capabilities in recent years. The Abu Dhabi Investment Authority and other Emirati companies are also reportedly interested in health care, fintech targets and other industries in Turkey.

Turkey and the UAE are expected to agree on investment deals during the visit, two Turkish officials also told Reuters earlier Wednesday.

A Turkish official familiar with preparations for the visit said deals could be agreed in the e-commerce, energy, and supply chain fields. Longer-term economic cooperation could come in funding and through UAE companies purchasing or establishing partnerships with their Turkish counterparts, the official said, predicting total UAE investment would ultimately be in the billions of dollars.

The memorandums of understanding are expected to be signed between the Abu Dhabi Development Holding (ADQ), Turkish Wealth Fund (TVF), and the Turkish Presidency Investment Office, as well as with some Turkish companies, including Kalyon Holding and CCN Group.

WAM said that the move was “to support the Turkish economy and boost bilateral cooperation between the two countries”.

It added that the main focus will be on “strategic investments”, especially in sectors including energy, health and food.

Turkey’s lira tumbled to a record low, weighed down by the prospect of a faster pace of tightening by the U.S. Federal Reserve.

The lira fell as much as 4.7% to 13.4541 per dollar at 8:08 p.m. in Istanbul, after Fed Chair Jerome Powell said it’s appropriate to consider finishing the central bank’s tapering of asset purchases a few months earlier than previously expected.

That’s compounding concerns over President Recep Tayyip Erdogan’s drive for lower borrowing costs, a move that has undermined the currency and fueled inflation. While most central banks are talking of tightening policy, Turkey has slashed 4 percentage points off borrowing rates since September.

The Turkish lira has weakened more than 27% since the central bank started easing policy, by far the biggest depreciation in emerging markets. Consumer prices rose an annual 19.9% in October, almost four times the official target.

Turkey’s economy zoomed ahead of most peers to expand 7.4% in the third quarter, but soaring inflation and a slump in the lira mean the surge could be short-lived.

Growth during the three months through September matched the median forecast among nine economists surveyed by Bloomberg. The seasonally and working day-adjusted figures showed an expansion of 2.7% in the last quarter from the previous three months, when gross domestic product surged 22% as the economy bounced back from the worst phase of the pandemic.

The UAE’s planned large-scale investments could provide a much needed surge for the Turkish economy, and the confidence to come out of the Lira crisis. However, a long term solution will be needed to definitively end the crisis of the currency. It remains to be seen whether Erdogan’s experiment will work, but current forecasts are not positive.