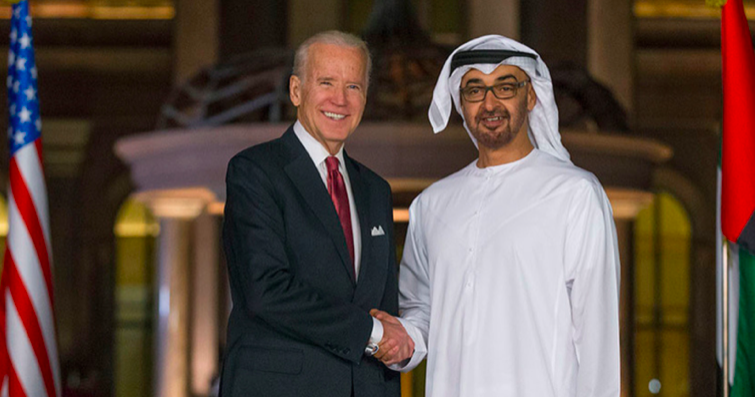 Following the inauguration of president Joe Biden, which took place on January 20, the leaders of the UAE have shared their congratulations to the new US leaders.

UAE President Sheikh Khalifa showed his support by wishing Biden all the success in his new role. He also reaffirmed the UAE’s commitment to strong ties with the USA as the two countries have done for many years.

In particular, he noted how the two nations have worked closely to tackle issues including climate change, global health and violent extremism.

Biden has previously worked closely with the UAE in his many years in government, most notably in the US Senate and as former Vice President under the Obama administration, something which Sheikh Khalifa highlighted in his cable.

Vice President and Prime Minister of the UAE and Ruler of Dubai, Sheikh Mohammed bin Rashid Al Maktoum also congratulated Joe Biden on his inauguration as the 46th President of the United States of America.

In his cable, Vice President His Highness Sheikh Mohammed bin Rashid wished Biden success and expressed hope that the two countries would deepen their decades-long partnership in working together on pressing challenges such as global health, climate change, and violent extremism. Moreover, Sheikh Mohammed noted that the UAE leadership has had the privilege of working closely with President Biden during his many years of service in the US Senate and as Vice President.

These messages clearly display the hope for continued cooperation between the UAE and US in both the economic and geopolitical sphere.

Interestingly, as US President Joe Biden was preparing to be sworn in, his predecessor was working on a last-minute deal to further solidify terms of a controversial arms sale to the United Arab Emirates, according to a think-tank that is suing the administration.

Former President Donald Trump signed a letter of agreement (LOA) with the UAE to purchase as many as 50 F-35 warplanes and 18 armed drones in the final moments of his presidency.

The LOA solidifies the terms of the weapons sale between the two countries.

According to Reuters, which broke the news, the agreement was one of the final acts of the Trump administration, occurring just an hour before President Joe Biden was inaugurated.

A source with knowledge of the situation confirmed separately to Defense News that the U.S. and UAE officials on Wednesday signed a letter of agreement, which solidifies the terms of a foreign military sale between two nations.

The departments of State and Defense did not immediately respond to requests for comment.

In a move that could potentially threaten US relations with the UAE, before taking office, Biden had said he planned to re-examine the $23bn UAE arms deal, which is being challenged in a lawsuit by the New York Center for Foreign Policy Affairs (NYCFPA). The reasons cited were that the deal would have the American government contribute to an escalating arms race in the Middle East. In October, Biden’s then nominee for secretary of state, Antony Blinken, told reporters that the sale was “something we would look at very, very carefully”. Should the deal be reversed, relations would plummet and it would be a negative start of the Biden presidency for the UAE.

The UAE is hoping for strong ties with the US

Despite these worries, the UAE remains optimistic, and hopes for strong cooperation in various fields with the US, as it believes it is an increasingly valuable strategic partner to the superpower.

The UAE’s energy minister told CNBC ahead of Inauguration Day that the U.S. will always play an important role in global energy markets, even though President-elect Joe Biden is likely to be less vocal than President Donald Trump about oil.

“The United States of America is a major player now … with its production, with the fact that this industry that has been developed through shale oil and gas has created lots of jobs and created an economy by itself,” said Suhail al-Mazrouei.

Furthermore, Sultan Al Jaber, who heads Adnoc, chairs energy group Masdar and the Minister of Industry and Advanced Technology for the United Arab Emirates, said that the relationship between the US and UAE “is multifaceted, covering diplomacy, security, energy, trade, investment and culture.”

The UAE has key partnerships with a number of US companies, “including Exxon, Oxy and Baker Hughes”, Al Jaber said. There is scope for extending this partnership, particularly in unconventional oil and gas. Abu Dhabi is working on these resources, reporting a 22 billion barrel find in November 2020.

Additional options are arising in new technologies. Al Jaber cited hydrogen, carbon capture and renewable energy as all holding potential for co-operation with the US.

“In addition, I would like to see us collaborate more closely on [artificial intelligence] and advanced technology- expanding partnership with our new [Mohamed bin Zayed University of Artificial Intelligence (MBZUAI)] and other research centres here in the UAE.”

Al Jaber hosted Biden in 2016 at Masdar. The UAE company signed a deal with the US Department of Energy in 2010, while Biden was US vice president, on carbon capture and renewable-powered desalination. The UAE appointed the Adnoc CEO to be the special envoy for climate change in November 2020.

Biden was particularly interested in sustainable development and climate action, Al Jaber reminisced about the then vice president’s visit.

There is therefore good reason for the UAE to be optimistic, despite the recent F35 tensions, that would complicate ties, but not destroy them.