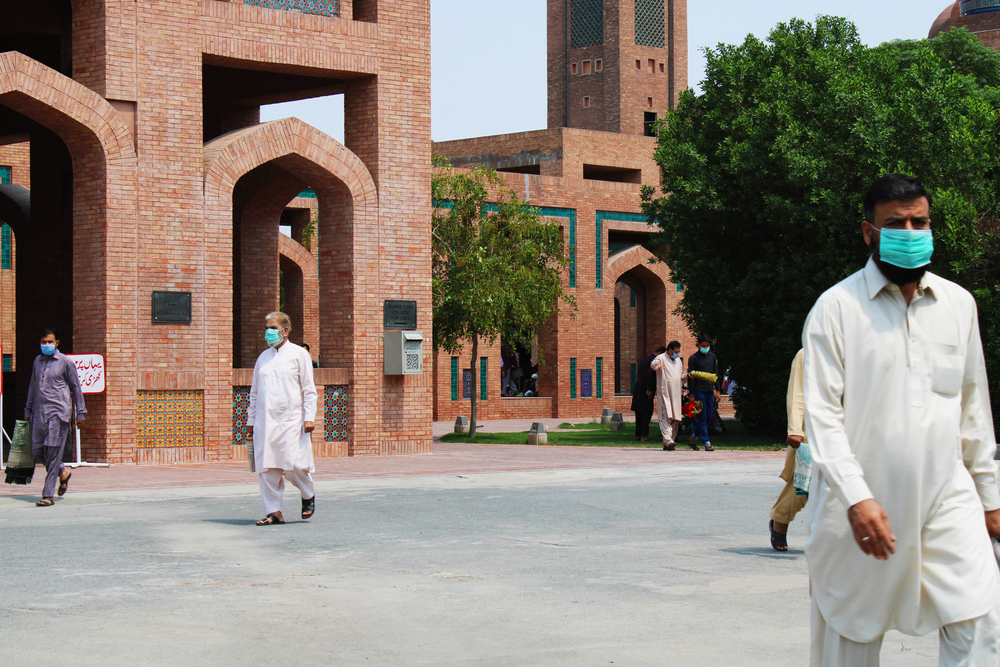 The Coronavirus in Pakistan

Since the start of the Coronavirus epidemic, Pakistan has struggled to contain the virus, as many cities in the country are densely populated, aiding the swift spread of the virus. The virus was confirmed to have reached Pakistan on 26 February 2020, when a student in Karachi tested positive upon returning from Iran. As of 2 July 2020, there have been about 217,469 confirmed cases, a very high figure when compared to the figures worldwide, putting the country at number 12 worldwide in terms of cases, although neighbouring India suffered a similar fate, with over 600,000 confirmed cases. Furthermore, More than 4,000 people have lost their lives to the disease in Pakistan since the beginning of the outbreak.

Pakistan on Monday recorded 3,557 new coronavirus cases in 24 hours, with 49 new deaths, according to official data. With 4,133 new cases over the past 24 hours, Pakistan has emerged as one of the countries with the fastest rate of coronavirus infections in recent weeks, according to the World Health Organization (WHO).

Despite this, there is room for optimism. Pakistan’s coronavirus recoveries are now above 100,000. Islamabad has imposed locality-based lockdowns in scores of hotspots in some 20 cities to curb the spread of the virus. According to the Health Ministry, the figure marked a fall of almost 3,000 from the record high of 6,895 reached on June 13. Fatalities have also decreased significantly over recent days, falling to 49 on Sunday from the record high of 153 on June 19. The death toll in the country now stands at 4,167 , while recoveries increased to 95,407, raising the overall recovery ratio from 42% to 46.2%, according to the ministry’s data.

Health experts believe the falling numbers are due to the locality-based lockdowns termed “smart lockdowns” by the government recently enforced in high-risk areas in 20 big cities. However, local media reports suggest it could be because of reduced testing, with daily test numbers falling to less than 23,009 from over 32,000.

In the next section we will look at the reasons behind such numbers of both rise in rates and recovery, looking at the Pakistani government’s response to the outbreak.

How Pakistan dealt with the virus

There has been criticism aimed at the Pakistani government for the way they handled the virus. Interestingly, despite a severe lack of personal protective equipment (PPE) and ventilators in the country, Islamabad allocated $7.85bn for defence and merely $151m for health in the budget for the financial year 2020-2021. This represents a 12 percent rise in Pakistan’s defence spending compared with the last financial year. Furthermore, the increase in defence spending comes at a time when Pakistan is forced to allocate 41 percent of its expenditure to debt servicing. So far, Islamabad has spent some $424m on coronavirus relief. However, as demonstrated by the government’s repeated appeals for debt relief, more funds are needed to efficiently tackle the crisis. Critics have questioned why the increase in spending on the military is not instead going to fighting the pandemic.

Although coming at a time when the Corona Virus was still violently spreading in Pakistan, PM Imran Khan’s decision in early May to lift a 2 month lockdown is understandable, as millions were struggling with starvation during that time of drastically reduced economic activity. Nevertheless, the country’s Covid-19 cases surged once the lockdown was eased, Reuters reported.

The government then transitioned to the government is targeting coronavirus hotspots in the country and locking those areas down, which has received praise by some. Pakistani economist Reza Baqir said, “I think the smart lockdown strategy of locking down hot spots in cities so far is working reasonably well, and we are confident that with the combination of measures – for us on the economic side, we should come out of this crisis largely unscathed.”

Despite this, the virus continued to spread, and in the middle of June, the World Health Organization urged Pakistan to impose a two-week intermittent lockdown to stem a spike in new cases.

Another issue raised in Pakistan, is the under-reporting of Coronavirus cases, and their concealment. Several statistical models, official statements, leaked government documents, and interviews with people in various cities suggest that the number of COVID-19 patients and deaths in Pakistan are grossly under-reported. “The actual numbers will be two to three times more than what the government is reporting,” Atta ur Rahman, chairman of Prime Minister Imran Khan’s task force on science and technology, told Bloomberg news Wednesday. This is a worrying sign that shows that, despite the rise of recoveries, Pakistan may be far away from ending the Coronavirus crisis.

The effects on Pakistan’s economy

Pakistan’s economy has been heavily hit by the Coronavirus, and will not do it any favours in moving towards economic recovery. The economy was underperforming even before the onset of COVID-19, surviving on an IMF loan package of $6bn. The gross domestic product (GDP) growth rate had radically decreased from 5.5 percent in the 2017-2018 financial year to 2.4 percent in 2020-2021.

Furthermore, for the first time in 68 years, Pakistan’s economy is set to contract in the outgoing fiscal year with a negative 0.38 per cent due to the adverse impact of the coronavirus pandemic coupled with the already weak financial situation before the pandemic hit the country, according to the economic survey unveiled on Thursday.

Before the pandemic, Pakistan was already burdened by an external debt of about $112bn. Today it is facing the additional challenge of feeding some 25 million poor families that can no longer make a living due to COVID-19. Moreover, the country saw a 30 percent reduction in tax revenue, due to the government’s incompetence and decreased spending caused by the coronavirus lockdown.

Advisor on Finance Abdul Hafeez Sheikh said the International Monetary Fund (IMF) had warned about the dire impact of COVID-19 on the developing countries due to drop in exports and remittance. “Exports fell due to a fall in global demand while remittance decreased due to layoffs of Pakistanis employed abroad,” he said.

In addition to this, with the spread of COVID-19, China had to restrict its trade, and the majority of that vacuum was redirected to the remaining Asian states. Loss of a major supplier meant higher lead times, inability to meet export orders and potential loss of international customers, all of which are conditions that raise doubts over the ability of an entity to operate as a going concern.

The Pakistani government recently announced a new budget aimed at guiding the country through the coronavirus pandemic and related economic crisis, as well as other longstanding domestic challenges in areas such as education and health care. Some have criticezed the budget proposed as leading into deficit, and as mentioned earlier the amount that is directed towards defence, but many have supported its introduction of the rationalization of custom duties as well as the advance ruling system, which would ease trade and minimize costs associated with cross border trade a domain that Pakistan has historically struggled to contend in.

However, the budget will most likely not reach many of its targets, and it is expected that Pakistan will likely introduce another mid-year budget later in this Fiscal Year. Pakistan is therefore in a very difficult situation, which only the international scene, especially G20, can decisively solve.