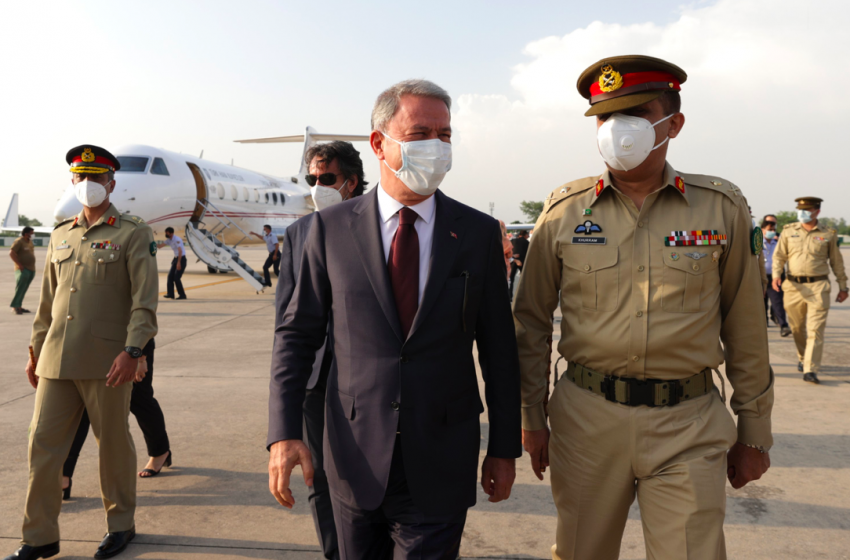 Turkey and Pakistan reiterated their desire to further advance bilateral ties, including efforts for peace and stability in the region.

In an official visit, Turkey’s defense minister met with Pakistan’s authorities to discuss a slew of issues, including the fragile Afghanistan peace process.

Hulusi Akar, who arrived in the Pakistani capital Islamabad for an official visit, called on Pakistan’s Prime Minister Imran Khan on Wednesday to discuss a range of issues, including Ankara’s ongoing efforts for a political solution in Afghanistan.

Khan highlighted that the historic fraternal ties between Pakistan and Turkey are “marked by unique mutual trust and mutual support.”

He conveyed his greetings for Turkey’s President Recep Tayyip Erdoğan and the brotherly Turkish people.

Expressing “deep” concern over the forest fires in Turkey, he reaffirmed Pakistan’s solidarity and readiness to extend all possible assistance, the statement said.

Khan expressed satisfaction at the existing level of bilateral defense cooperation, thanking Ankara for its “strong and consistent support to Pakistan on all issues, particularly the Jammu and Kashmir dispute.”

Akar, for his part, conveyed warm greetings from President Erdoğan and reiterated Turkey’s support to Pakistan “on all issues, including Jammu and Kashmir.”

He concurred with Khan on enhancing cooperation in all areas, including in the defense field, the statement added.

Akar is visiting Islamabad as part of frequent high-level exchanges between Pakistan and Turkey for consultations on important bilateral and regional issues.

Akar met with Bajwa at the Pakistan Army headquarters in the garrison city of Rawalpindi, according to a statement from the army’s media outlet.

During the meeting, matters of mutual interest, including defense and security cooperation between the two countries and overall regional security, were discussed, the statement said.

Turkey’s interest in the Kabul airport

Turkey is for now still intent on running and guarding Kabul airport after other foreign troops withdraw from Afghanistan, but is monitoring the situation after rapid advances by Taliban insurgents, two Turkish officials said.

The Taliban captured two major Afghan cities, the country’s second- and third-largest after Kabul, and a strategic provincial capital on Thursday, further squeezing the embattled government just weeks before the end of the American military mission in Afghanistan.

The seizure of Kandahar and Herat marks the biggest prizes yet for the Taliban, who have taken 12 of Afghanistan’s 34 provincial capitals as part of a weeklong blitz.

Turkey has offered to deploy troops at Kabul airport after NATO withdraws and has held talks with the United States for weeks. President Tayyip Erdogan has asked it to meet financial, logistical and diplomatic conditions.

“For now nothing has changed regarding the TAF (Turkish Armed Forces) taking control of Kabul Airport. The talks and the process are continuing,” a senior Turkish official told Reuters.

“Work is continuing on the basis that the transfer will happen, but of course the situation in Afghanistan is being followed closely,” he said.

The Taliban have warned Turkey against keeping troops in Afghanistan to guard the airport but Ankara has maintained its stance.

However, the Taliban have since shown a slight change of stance and opening to talks with Turkey whom they stated to respect, as a fellow Muslim country.

Will Pakistan facilitate talks with the Taliban?

In comments to foreign media in Islamabad on Wednesday, Pakistani Prime Minister Imran Khan said after talks with Turkish Defence Minister Hulusi Akar that efforts would be made to facilitate talks between the Taliban and Ankara.

“The best thing is for Turkey and the Taliban to have a face-to-face dialogue. So both can talk about the reasons why Kabul airport has to be secured,” Khan said.

“And so we will be talking to the Taliban, to use our influence on them, to have a face-to-face talk with Turkey.”

However, there are growing concerns that as the Taliban gains more control of Afghanistan, Pakistan’s influence on the group and ability to contain it, are weakening. Signaling this, Taliban insurgents closed a major crossing point Friday for travel and trade with Pakistan, demanding the neighboring country end the alleged mistreatment of Afghan travelers and ease other restrictions.

The abrupt closure of the busy Spin Boldak crossing into the southwestern Pakistani town of Chaman has stranded hundreds of travelers and trucks carrying commercial goods in both directions, according to traders and witnesses.

Nevertheless, Pakistan still may have the ability to facilitate negotiations between Turkey and the Taliban, especially since the Taliban is aware of Turkey’s geopolitical importance, which it could use to avoid complete isolation. Taliban leaders are reportedly willing to meet Turkish President Recep Tayyip Erdogan “under the right circumstances” to discuss the Afghanistan crisis, a spokesman for the group told Middle East Eye on Thursday.

Erdogan said on Wednesday that there was a possibility to receive the person who leads the Taliban, without naming him, to exchange views on the situation regarding Kabul international airport, which Ankara wants to continue to protect.

“Everyone wants to meet our leader. And we would also like that, but in the right circumstances. There is communication between us and the Turkish embassy in Doha. And we like to have relations with all countries,” said Taliban spokesperson Mohammad Naeem in a written statement to MEE. “We have said our word to Turkey about the security of Kabul airport in all frankness and clarity. All foreign forces must leave our country.”

The Taliban’s spiritual leader, Haibatullah Akhundzada, has not been seen in public since 2016. The group’s current public face is Mullah Abdul Ghani Baradar, one of the co-founders of the Taliban, who is leading the political office and is part of the group’s negotiating team in Doha.

Even though Ankara continues to insist on carrying the airport mission that it sees as vital to the security and work of the foreign missions and aid groups in Kabul, the rapid collapse of the Afghan forces worries Turkish officials. One US official told the Washington Post on Tuesday that the US military now assesses that a collapse of Afghan forces could occur within 90 days. Others said it could happen within a month.

Pakistan could certainly succeed in facilitating and easing talks between Turkey and the Taliban, but it is hard to say whether such negotiations would succeed, especially as the Taliban’s position strengthens.