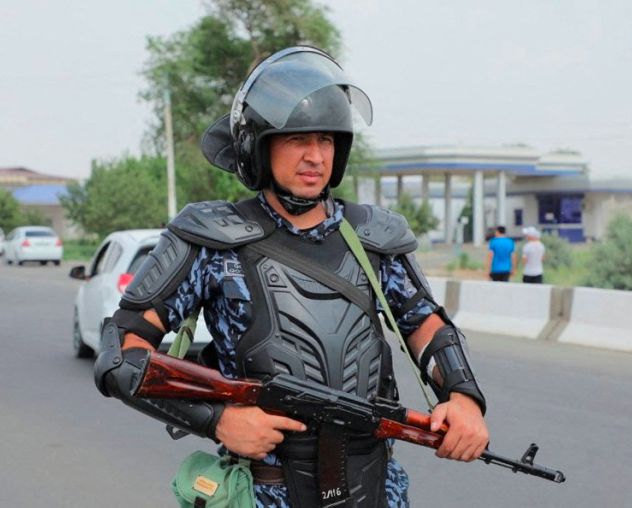 Uzbekistan’s president said there have been casualties among civilians and law enforcement personnel after rare public protests in the country’s autonomous northwestern Karakalpakstan province, which has seen significant unrest over a planned constitutional reform.

In a statement posted online on Sunday, President Shavkat Mirziyoyev said rioters had carried out “destructive actions” in the city of Nukus, throwing stones, starting fires and attacking police.

“Unfortunately, there are fatalities among civilians and law enforcement officers,” Mirziyoyev said during a speech in Karakalpakstan that was relayed by his press service on Telegram. He did not specify the number and nature of the casualties.

Sultanbek Ziyayev, the head of the Ministry of Health of the Republic of Karakalpakstan, told news website Daryo.uz that hospitals in Nukus were full of patients who had been wounded when protesters clashed with security forces.

“Thousands of wounded have been hospitalised and are being treated,” he said, according to the website.

An exiled opposition politician, Pulat Ahunov, told Reuters news agency that, based on contacts with local sources and video evidence, at least five people had been killed. He said there were unconfirmed reports of dozens more dead.

Ahunov said people were unable to move around and obtain more information because of a state of emergency imposed by the authorities.

Karakalpakstan has seen significant internet outages since the draft amendments were published last week, stripping the region of its nominal “sovereign” status and its right to secede from Uzbekistan via popular referendum.

Mirziyoyev has since dropped plans to roll back the province’s autonomy after the demonstrations.

At least 18 people were killed and 243 others injured, including 94 seriously, during clashes between protesters and security forces, according to Uzbek authorities.

Dadabayev said foreign nationals were also arrested in connection with the incidents. However, he did not disclose the identities of those detained due to the ongoing investigation process.

On Saturday, Uzbekistan announced a month-long state of emergency in Karakalpakstan. The decree was signed by President Shavkat Mirziyoyev after demonstrations erupted in the region.

The decree limits entry and exit from the province and prohibits all public events.

History of the conflict

The recent protests in the autonomous Karakalpakstan region in Uzbekistan are another example of the delayed time-bombs left behind by fallen empires.

Long present under the surface, these time bombs can take a remarkably long time to explode. In the case of the Karakalpaks (fortunately so far a limited one), their protests erupted 31 years after the Soviet Union collapsed and Uzbekistan became independent.

The Karakalpaks (“Black Hats”) are a formerly nomadic Turkic Muslim people who migrated into the area south of the Aral Sea from the 16th to the 18th Centuries. They were loosely subject to the Khans of Khiva, before being conquered by the Russian Empire during the 19th century. Their language forms part of the same Turkic linguistic family as the Kazakhs to the north and west.

Under Soviet rule, they were considered too few in number and too mixed with other ethnicities to be given their own “union republic,” like the Kazakhs and Uzbeks. Instead, like many small ethnicities of the Soviet Union, they received the status of an “autonomous republic,” first within Kazakhstan from 1925 to 1930, then in the Russian Federation, and since 1936 in Uzbekistan. The population of Karakalpakstan today is just over three million, roughly evenly divided between Karakalpaks, Uzbeks, and Kazakhs, with smaller numbers of Russians and Tatars.

In 1990, as the Soviet Union headed for disintegration like several other autonomous Soviet regions, the parliament (supreme soviet) of Karakalpakstan declared “sovereignty” in a bid for independence. By 1993, however, this had been abandoned in return for a promise by Uzbekistan that in 20 years a referendum on independence would be held. This compromise, unique in post-Soviet disputes, resulted from a number of factors: the very small numbers of Karakalpaks; the fact that both in Karakalpakstan and Uzbekistan as a whole, the Communist authorities remained seamlessly in power; and the fact that Moscow had no interest in backing the Karakalpaks (unlike in the cases of Abkhazia, Transdniestria, and Crimea).

However, no referendum on independence was ever held, and small movements emerged (based abroad) calling for independence and accusing Uzbekistan of seeking to gradually dilute and eliminate Karakalpak identity. Over the past three generations, the living standards of rural Karakalpaks have also deteriorated steeply as the result of the salination and degradation of their grazing lands. This stems from the drying up of the Aral Sea due to overuse of water from the rivers that feed it.

The latest protests, in which at least 18 people were killed and hundreds injured, erupted when Uzbekistan’s government and parliament abolished the constitutional right of Karakalpakstan to secede.

Will it break away? Russia’s role

Russia has similarly to the recent Kazakhstan crackdown, seen an opportunity to increase its influence and importance to the Uzbek government, by siding with, and refusing to condemn the government during the increasingly visible protests. In this case Russia did not go as far as intervention. This appears to have failed in the case of Kazakhstan, as the central asian state declined Russian requests for support in the Ukraine invasion.

The Kremlin said on Monday that the deadly unrest that has broken out in Uzbekistan’s Karakalpakstan region was an “internal matter” for Tashkent.

Speaking to reporters, Kremlin spokesperson Dmitry Peskov said that Russia considered Uzbekistan a “friendly country” and had no doubt that its leadership would work to resolve the issue.

“Uzbekistan is our ally, a friendly country, and our very important partner. Everything that is happening in Uzbekistan is an internal affair of this country. We have no doubt that with the active work of the leadership of Uzbekistan, all existing problems will be resolved,” he said.

Earlier, Uzbekistan’s General Prosecutor’s Office in the capital Tashkent said in a statement on Monday that at least 18 people were killed and 243 others were injured in the protest-hit autonomous region of Karakalpakstan on Friday and Saturday.

The statement said protests began in Nukus, the capital of Karakalpakstan, over proposed constitutional changes that would have affected the region’s autonomous status.

The former Soviet Union has seen seven such post-colonial conflicts. The Abkhaz, rather like the Karakalpaks, asserted that their confusing constitutional record under Soviet rule meant that at independence they had the right to secede from Georgia. The southern Ossetes claimed the same on the basis of their desire to unite with the Northern Ossete autonomous republic of Russia, although South Ossetia had a large Georgian minority.

The Armenians of Nagorno-Karabakh claimed the right to leave Azerbaijan and join Armenia, though Nagorno-Karabakh contained a large Azeri minority and an ancient Azeri city. The Russian-speaking populations, Transdniestria, Crimea, and parts of the Donbas claimed the right to leave Moldova and Ukraine respectively on the grounds that they had never historically been part of those states and had been incorporated in them by Soviet imperial fiat without any consultation.

The violent episode we just witnessed in Karakalpakstan was eerily reminiscent of the beginning of one of the darkest chapters in recent Uzbek history – the 2005 Andijan massacre when Karimov’s security forces killed hundreds of civilians following unrest in the Fergana Valley. The precise number of victims has never been revealed and the massacre was followed by a period of unprecedented repression. Karimov expelled international media and NGOs from the country, doubled down on kleptocratic autarky and isolated the country further from the international community.

This period of isolation ended only after Mirzoyoyev took over the presidency. His reforms included inviting foreign press back into Uzbekistan. He also sought meetings with a host of international governments that shunned his predecessor. But he did not seek any new alignment, balancing between the major powers in the region – Russia and China – and the West, seeking credit and investment from all.

By swiftly abandoning the constitutional reform proposals that spurred the unrest, Mirzoyoyev signalled that he may eventually return to his initial progressive trajectory. Nevertheless, there remains a serious risk that he will imitate Karimov’s post-Andijan strategy and focus solely on protecting his own power at the cost of isolating the nation, once again transforming it into a full autarky and clamping down on the rights and freedoms of Uzbek citizens. A prominent Karakalpak journalist, Lolagul Kallykhanova, is currently missing and believed to be in detention after covering the protests in Karakalpakstan and publishing content critical of the central government.

A key factor that will determine which path the Uzbek leader will take in the coming days will be how the international community responds, and whether Russia takes more decisive action to block the protests, like in Kazakhstan.