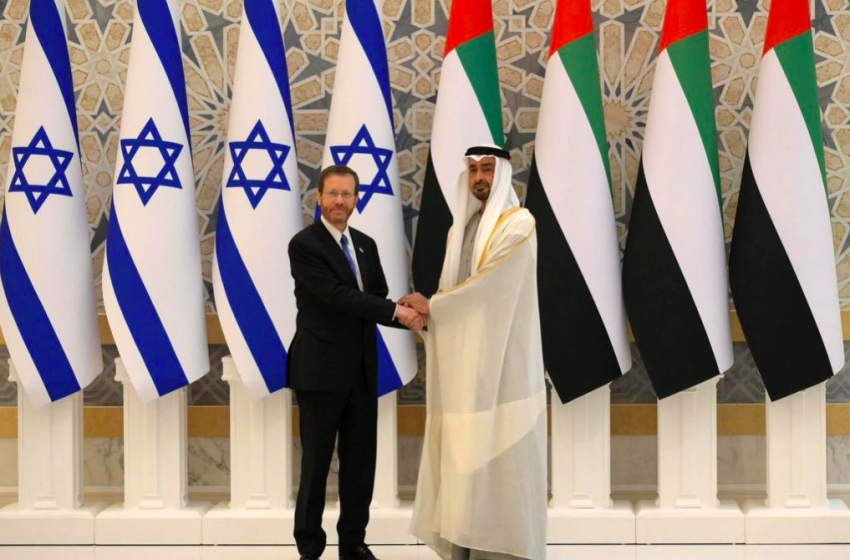 Israel’s president spoke at Dubai’s Expo 2020 world fair on Monday on the first presidential visit to the United Arab Emirates, despite the Gulf state overnight saying it had intercepted a ballistic missile fired by Yemen’s Houthis.

The presidency in Israel is a largely ceremonial post. During Prime Minister Bennett’s visit last month, international talks on Iran’s nuclear programme were on the agenda.

The Palestinian group Hamas, which opposes countries normalising ties with Israel, said such visits “encourage the occupation to continue escalating its aggression against our Palestinian people and denial of their rights”.

En route to the UAE President Herzog’s plane flew over Saudi Arabia, which Herzog said was “a very moving moment”. Riyadh has not yet followed its Gulf neighbours in normalising ties with Israel, but Israeli officials express hope this will happen.

“The Abraham Accords should be continued and more nations should join us,” Herzog said.

The UAE, along with Bahrain, signed the US-brokered normalisation agreements with Israel at the White House in September 2020, pacts that have angered the Palestinians.

President Herzog and his wife Michal landed in Abu Dhabi on Sunday morning, overflying Saudi Arabia en route. They were greeted and welcomed by the UAE Minister of Foreign Affairs, Sheikh Abdullah bin Zayed al Nahyan. The Israeli president was due to embark on a full programme of working meetings with UAE ministers and officials.

The Israeli president’s visit is part of the co-operation agreed in the Abraham Accords, signed in August 2020 between Israel and the UAE and Israel and Bahrain. But there has always been the expectation that more Arab states would want peace agreements with Israel.

The United Arab Emirates (UAE) on Monday intercepted and destroyed a ballistic missile in the third such incident this month, according to authorities, while the Israeli President was in the country on a historic visit.

The attack caused no damage, the UAE defense ministry said, but follows a series of unprecedented strikes on the country this month by the Iran-backed Houthi militants in Yemen.
A Houthi spokesman said the group launched “missiles and aircraft” at “important and sensitive” targets in the UAE and indicated that the attack was intended to disrupt the Israeli President Isaac Herzog’s visit.
The President and his entourage were in no danger, an Israeli presidential spokesman said, and the visit continued as planned. Herzog visited Expo 2020 in Dubai — the UAE’s commercial hub on Monday and met with UAE Prime Minister Mohammed bin Rashid Al Maktoum.
“The UAE ceases to be a safe place so long as the tools of the Israeli enemy in Dubai and Abu Dhabi are used against our people and our country,” said Houthi spokesman Yahya Al Saree on the group’s Al Masirah TV, hours after the attack.
The UAE said it responded to Monday’s attack by destroying a ballistic missile platform and launch site in Yemen’s Al Jawf.
On January 17, the Houthis launched a drone attack, killing three foreign workers in the UAE capital, Abu Dhabi. The Saudi-led coalition fighting the Houthis responded with a week-long offensive in Yemen, killing scores of people and knocking out the internet.
The Houthis launched missiles again on January 24, but the UAE intercepted those with support from the United States. After that attack, a Houthi spokesperson warned the group would “expand their operations over the next phase,” and called on foreign companies to leave the UAE.
On Sunday, Herzog met with Abu Dhabi Crown Prince Sheikh Mohammed bin Zayed Al-Nahyan in Abu Dhabi, and condemned terrorist attacks targeting the UAE, according to the UAE’s state news agency WAM.
In 2019, the UAE pulled most of its troops from Yemen, after privately deeming the war unwinnable. The campaign failed to crush the rebels but exacted a huge humanitarian toll, with thousands of Yemenis dead and malnourishment and disease widespread.
More recently, the UAE has returned to the conflict, backing Yemeni groups in flashpoints like the oil-rich provinces of Shabwa and Marib.

It is in Israel’s interest to counter Iran in the Gulf. This was a big motive for the Abraham Accords. It is therefore unsurprising that Israel is interested in directly countering the Iran-backed Houthis by supporting the UAE militarily. Israel has offered security and intelligence support to the United Arab Emirates against further drone attacks after a deadly strike by Yemen’s Iran-aligned Houthi group, according to a letter released on Tuesday by Israel’s leader.

In a statement, Bennett condemned the attack, claimed by the Houthi rebels in Yemen. “I strongly condemn the terrorist attacks in Abu Dhabi carried out by the Iranian-backed Houthis and send condolences to the families of the innocent victims,” Bennett said.

“Israel stands with the UAE. I stand with [Crown Prince] Mohammed bin Zayed. The world should stand against terror.”

In a letter to bin Zayed, Bennett said Jerusalem was committed to working with Abu Dhabi “in the ongoing battle against extremist forces in the region, and we will continue to partner with you to defeat our common enemies.”

He said he had “ordered the Israeli security establishment to provide their counterparts in the UAE with any assistance” that could help to protect against future attacks.

The UAE vowed reprisals after the Houthi attack on Monday triggered a fuel tank blast that killed the three victims.

The United Arab Emirates is part of a Saudi-led military coalition that supports Yemen’s government against the Iran-backed Houthi rebels, who have repeatedly targeted Saudi Arabia with cross-border strikes.