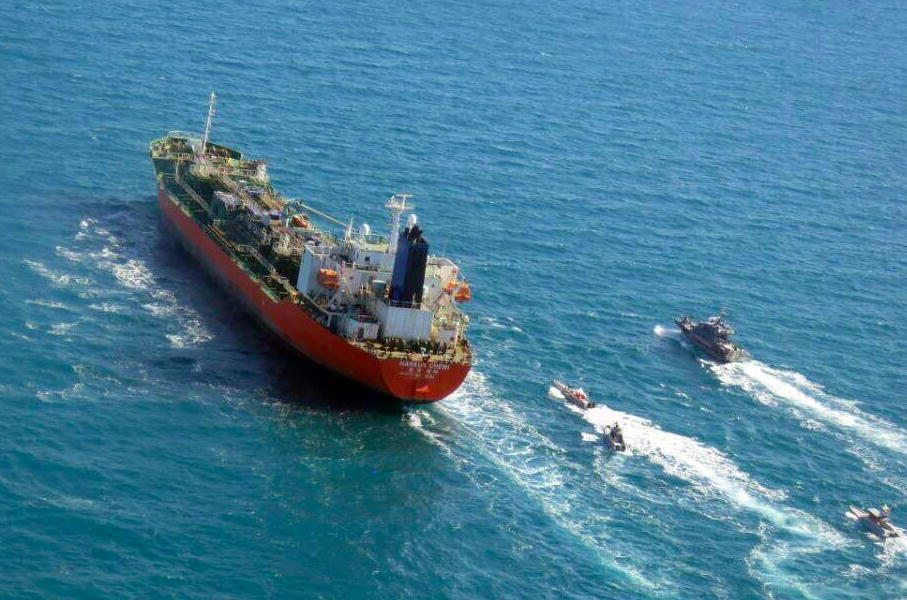 Tensions between Iran and South Korea are surging after the Revolutionary Guard took control of a South Korean-flagged tanker, a move some see as a warning to other countries that side too closely with the U.S. on sanctions against Tehran.

Iranian forces seized the Hankuk Chemi in waters off Oman on Monday, officially citing pollution concerns. But speculation suggests the seizure is an attempt by Tehran to regain control of frozen financial assets in South Korea and prevent other U.S. allies that maintain economic ties to Iran, like Japan, from cutting the cord.

Iranian officials said the ship was detained in the Persian Gulf by the Islamic Revolutionary Guards Corps because it had violated environmental protocols and was polluting the sea, according to Iranian state news agencies. The ship was carrying 7,200 tons of chemicals, mostly methanol, according to the South Korean company that owns it, which has denied that it was polluting the waters.

The tensions come as Tehran has sought to pressure the government in Seoul to release about $7 billion in revenues from oil sales that remain frozen in South Korean banks since the Trump administration tightened sanctions on Iran.

But they also follow a recent escalation of tensions between the United States and Iran as President Trump’s term draws to a close. Iran said on Monday that it was starting to increase nuclear enrichment levels at a key facility to 20 per cent, a step closer to developing the capacity to produce a nuclear weapon.

The ship, the tanker Hankuk Chemi, was sailing from Jubail, Saudi Arabia, to Fujairah in the United Arab Emirates when armed Revolutionary Guards approached it, according to Ri Il-su, an official at DM Shipping Co., the company that owns it.

Once aboard, they forced the ship to change course and sail to Iran. “The Iranian troops said they were coming on board for an investigation but didn’t answer questions about what the investigation was about,” Mr Ri said, who added that the captain of the ship called the company during the seizure.

Communication between the ship and the company was cut off, and the company received an antipiracy security alert notice from the ship, which company officials suspected was activated by the captain as a warning to the ship’s headquarters. Mr Ri called accusations by Iran that the vessel was polluting waters “absurd.”

Seoul is working to secure the return of the ship and its crew. Five of the crew’s 20 members are South Korean, according to the country’s Foreign Ministry. The ministry and the South Korean Embassy in Tehran have confirmed they are safe, and urged Iran to release them as soon as possible.

Relations between Iran and South Korea

Ever since the reimposition of sanctions by the Trump administration, Iran-South Korea relations have been on a downward trajectory. Tehran has been complaining about the freezing of an estimated $7 billion in Iranian funds held in two South Korean banks since September 2019, when a U.S. waiver for imports of Iranian oil expired. A number of official meetings have been held to no avail, and that Tehran is now threatening Seoul with legal action in the International Court of Justice, a blanket trade ban on Korean goods, and the barring of Korean businesses from its lucrative construction and energy markets in the future.

In the past Seoul had been able to work out exceptions in U.S. sanctions to permit some trade with Iran, but the Trump administration has been resolute in almost completely closing off the Iranian economy.

Moreover, Iranian analysts have routinely pointed to Tehran’s ties with Pyongyang as a formidable obstacle to the country’s diplomatic efforts at elevating its relations with Seoul. In particular, Iran’s offer of an energy lifeline to the Kim regime has been a constant irritation that officials in Seoul have had to put up with.

Iran was one of the first Middle Eastern countries to establish diplomatic ties with the Republic of Korea in 1962. Since then, bilateral relations between the two were marked by a high degree of trust and cooperation on both the political and commercial fronts. With both belonging to the U.S.-led anti-communist camp, for instance, Tehran was one of South Korea’s staunch allies in the United Nations on all issues related to the Korean cause. Commercially, Korean contractors had close to 5 per cent of all their businesses in Iran by the late 1970s. The Islamic Revolution, however, sucked the political air out of their relations and slowly turned their ties into a purely commercial affair void of any strategic depth. As a result, the two countries have been struggling to forge an organic commercial link that is immune to and isolated from, the wider geopolitical developments in their vicinities. Given their opposing geostrategic orientations today, it is only fair to suggest that Tehran and Seoul have gone from friends with benefits to friends with detriments. Soon, they could very well stop being friends altogether, and the latest seizure of the Korean ship by Iran will certainly increase the likeliness of such a result.

However, it appears South Korea still values its economic ties with Iran, as Seoul said it will soon dispatch a diplomatic team to Tehran for talks over the seizure of its tanker by Iran over environmental violations.

“A delegation … will be dispatched to Iran at the earliest possible date to try to resolve the matter through bilateral negotiations,” South Korea’s Foreign Ministry Spokesperson Choi Young-sam said at a regular press briefing on Tuesday. This is a sign that Korea is trying to maintain a balance between its economic ties with Iran, and its strategic relations with the US.

High tensions between Iran and the US

Iran and the US have been engaged in high tensions in recent weeks, which has led to Korea being placed in this tough spot.

The U.S. has seen increasing indications that Iran could be planning an attack against American forces or interests in the Middle East, according to a U.S. official.

The U.S. official, who spoke on condition of anonymity, acknowledged that reading Iran’s intentions was “difficult and at times unpredictable.”

But the indications are being taken seriously, the official said. The one-year anniversary of the U.S.’ killing of top Iranian general Qassem Soleimani is just days away.

This week, the U.S. flew B-52 bombers based at a Minot, North Dakota, Air Force base to the Middle East in a “deliberate appearance,” U.S. Central Command said, in the second such show of force this month.

The U.S. has recently accused what it said was an Iranian-backed militia of a Dec. 20 rocket attack on Baghdad’s green zone, in which 21 rockets were fired. No one was injured or killed.

Javad Zarif, Iran’s foreign minister, in a Tweet on Thursday objected to the B-52 flights and wrote: “Intelligence from Iraq indicate plot to FABRICATE pretext for war.”

Meanwhile, there have been strong signals that Iran’s preparations could be linked to revenge for the death of Soleimani earlier this year.

The top commander of Iran’s paramilitary Revolutionary Guard said last week that his country was fully prepared to respond to any U.S. military pressure, amid heightened tensions between Tehran and Washington in the waning days of President Donald Trump’s administration.

“Today, we have no problem, concern or apprehension toward encountering any powers. We will give our final words to our enemies on the battlefield,” Salami said, without mentioning the U.S. directly. Several top Iranian officials, along with members of Syrian, Palestinian and Lebanese resistance movements and Soleimani’s family, were in attendance.

Soleimani’s replacement, Brig. Gen. Esmail Ghaani, said at the ceremony that Iran was not afraid of confronting “powers,” again without naming the U.S.

The head of Iran’s judiciary, Ebrahim Raisi, said all those who had a role in Soleimani’s killing would not be able to “escape law and justice,” even if they were a U.S. president.

Strategic calculations on both sides have been complicated by the political transition in Washington to President-elect Joe Biden’s administration, which may seek new paths in dealing with Iran, and could in turn help re-build Iranian ties with South Korea, on the strategic front as well.