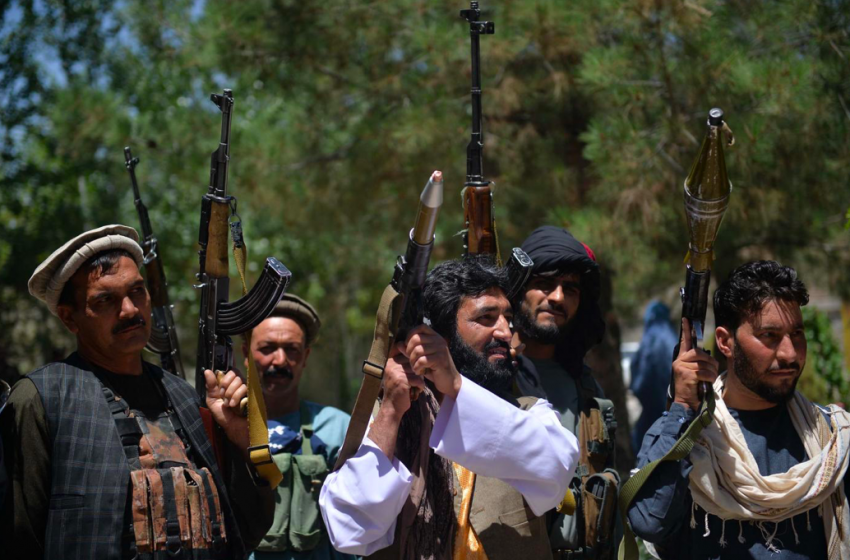 The Taliban have captured major border crossings with Iran and Turkmenistan in a sweeping offensive across northern Afghanistan, officials say.

Video footage appeared to show Taliban forces taking down the Afghan flag from the roof of a border customs office.

The Taliban are rapidly retaking land across Afghanistan as the US-led mission removes the last of its troops.

Taliban officials say their fighters have taken control of 85% of territory in Afghanistan – a claim impossible to independently verify and disputed by the government.

Other estimates have put the amount of territory the Taliban controls at more than a third of the country’s 400 districts, including an arc of land from the Iranian border in the west to the frontier with China on the other side of the country.

The Americans earlier this week quietly departed from Bagram airfield, a sprawling base that was the centre of US operations in Afghanistan and once held tens of thousands of troops.

Afghan officials acknowledged the loss of the Islam Qala and Torghundi border crossings, both in Herat province.

“All Afghan security forces including the border units are present in the area, and efforts are under way to recapture the site,” interior ministry spokesman Tareq Arian told the AFP news agency.

Zabihullah Mujahid, a spokesman for the Taliban, said the Islam Qala crossing was “under our full control”.

Reports said Taliban fighters had seized five districts in Herat without a fight.

Russia on Friday said the Taliban had taken control of about two-thirds of the Afghan-Tajik border in a swift advance. Russian foreign ministry spokeswoman Maria Zakharova said Moscow was urging all sides in Afghanistan to “show restraint”.

The reports came hours after US President Joe Biden defended his administration’s decision to withdraw from Afghanistan after 20 years of war.

“I will not send another generation of Americans to war in Afghanistan with no reasonable expectation of achieving a different outcome,” Mr Biden said.

He admitted it was “highly unlikely” the Afghan government would be able to control the entire country.

Officials in Iran have been following the fighting in neighbouring Afghanistan with concern and are rethinking policies toward the Taliban, as the Afghan militant group expands its territorial control in the wake of the US pullout from the country.

Reports that thousands of Afghan soldiers have escaped to Tajikistan, which borders Afghanistan’s north, leaving behind military equipment, have raised alarm in Iran, with all major news outlets covering the developments on their front pages.

In an article, titled “What will Iran do with the Taliban?”, the Shargh daily argued that the militant group gained international prestige after signing a deal with Trump’s administration last year to end 18 years of war.

According to the pro-reformist daily, Tehran must introduce new policies regarding the Taliban, taking into account the group’s re-emergence as a significant player on the Afghan political scene.

Meanwhile, comments from officials indicate that Tehran is ready to consider the Taliban as a political power in Afghanistan when the withdrawal of US forces from the war-torn country has been completed.

“The Taliban are from the Afghan people,” the daily quoted the director-general of the West Asia office at Iran’s foreign ministry Rasoul Mousavi as saying.

“They are not separated from Afghanistan’s traditional society, and they have always been part of it. Moreover, they have military power.

“The US has lost the war and can no longer carry out a military operation against the Taliban,” Mousavi added.

It therefore appears almost certain that Iran will not commit the same mistake as the US by militarily intervening, and will rather look to strengthen its diplomatic and possibly economic channels with the Taliban, in order to gain more influence in the war-torn country.

Iran looking to get involved in Afghanistan

Iran, Turkey, Pakistan and Russia have moved to fill the military and diplomatic vacuum opening up in Afghanistan as a result of the departure of US forces and military advances by the Taliban.

In Tehran the Iranian foreign minister, Javad Zarif, met Taliban negotiators to discuss their intentions towards the country, and secured a joint statement saying the Taliban do not support attacks on civilians, schools, mosques and hospitals and want a negotiated settlement on Afghanistan’s future.

The Taliban side was led by Abbas Stanekzai, a senior negotiator and head of the group’s political bureau in Qatar, while the Afghan government side was led by the former vice-president Yunus Qanooni.

Three other Afghan delegations were in Tehran at the same time. The value of the joint statement promising further talks is contestable, but Tehran’s diplomatic activism underlined fears in Iran about a spillover created by a prolonged civil war on its long border.

The Taliban delegation who visited Iran on Tuesday and Wednesday at Tehran’s invitation, alongside three other Afghan delegations, were told by Zarif that they may have to take tough decisions. Courage in peace was more important than courage in war, he said, arguing that courage lay in sacrificing maximalist demands and listening to the other side.

Zarif also said a continuation of conflicts between the government and the Taliban would have “unfavourable” consequences for Afghanistan, and a return to the intra-Afghan negotiations was the “best solution”. Iran has not attended the stalled Doha negotiations for over two years.

Saeed Laylaz, a prominent reformist-minded economist and adviser to previous governments, said: “Iran is facing a demographic crisis and I believe that the best, closest and least costly way to overcome this demographic crisis is to accept emigration from Afghanistan. Stability in Afghanistan is important for national security, contributing to the ageing crisis and Iran’s economy.

“The Taliban could not have survived so long without genuine political support and they might now serve Iran’s regional diplomatic interests. The Taliban are no longer the Taliban of the past, they have also realized that we must interact with the world, we must cooperate with the countries of the region.”

Iran has taken the track of negotiations for now, and it seems unlikely that it will want to militarily intervene in Afghanistan, or support the Afghan government. It has chosen the track of developing ties with the Taliban, while also pushing for increased intra-Afghan negotiations.