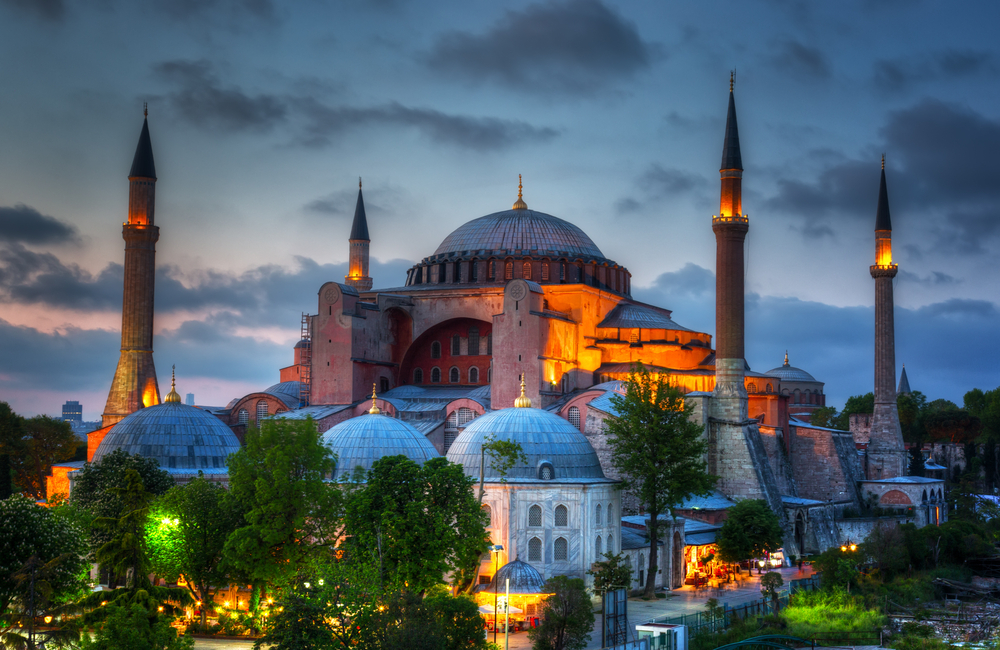 The history of Hagia Sophia

The Hagia Sopia has a long and complicated history that has involved changing hands several times. It is therefore not a surprise that a lot of controversy has surrounded its latest change of status once again.

After Roman Emperor Constantine died, his successor Constantinus decided that Byzantine needed his own Pantheon. It was Hagia Sophia, which translates to Sophia of God, or Holy Wisdom. The first name of the Church was ‘’Megale Ekklesia’’ which means ‘’the Grand Church’’. The first Hagia Sophia was built in 360. When its roof was burned by a fire in 404 and destroyed mostly in a second fire in 414, a great believer of orthodoxy Theodisius II dedicated another church in 415. Under the reign of Justinian the church was once again burned down after a revolt.

During the Iconoclast period, images and idols were prohibited to worship. So, most of the mosaics containing a human image were destroyed and covered during the reign of Leo III.  This continued until the reign of Theophillis, whose wife started renovations in churches, and made the icons reinstalled after his death.

In 1204, the Crusaders, led by Enrico Dandolo- the doge of Venice, invaded the Constantinople and looted Hagia Sophia. He was notorious for his brutality and when the Byzantines took the city again, they sacked his tomb buried in Hagia Sophia. Today you can see a signboard written ‘’Enrico Dandolo’’ in Hagia Sophia. However; it was placed by the Ottomans in the 19th century.

On the 29th of May, 1453, Ottoman Sultan Mehmed II entered the city, which came under Ottoman rule. The Sultan converted the church into a mosque at once. Although Sultan made many restorations & renovations in new Hagia Sophia, he preserved many mosaic. Mehmed II built a minbar, a mihrab, a madrasa and a wooden minaret in Hagia Sophia within the years. However, the Big Cross on the dome and the  bell of the tower were removed. The first wooden minaret of Mehmed II was rebuilt by Selim II. Sultan Bayezid II erected another minaret with brick stone on the southeast side of the mosque minaret. The other two minarets were built by Selim II and Murad III both of whom commissioned Sinan the Grand Architect. Meanwhile, Mosaics  were mostly covered with whitewash or plaster.

In the next stage of its surroundings, the Ottoman empire collapsed, and the Turkish Republic was proclamated by Mustafa Kemal Atatürk in 1923.  Ataturk uncovered the mosaics under foreign pressure in 1932, and mirroring his secular laicist rule, converted Hagia Sophia into a museum in 1935.

The latest conversion into a mosque and international reactions

Last Friday, a Turkish high court stripped the Hagia Sophia’s museum status, paving the way for it to be converted into a mosque. The court cancelled 1934’s council of ministers’ decision to turn the establishment into a museum and said Hagia Sophia was registered as a mosque in its property deeds. The court ruled that the architectural gem was owned by a foundation established by Sultan Mehmet II, the conqueror of Istanbul, and presented to the community as a mosque a status that cannot be legally changed. Turkish president Recep Tayyip Erdogan consequently ordered the conversion of the city’s historic Hagia Sophia back into a mosque.

The decision would not deprive it of its identity as a world heritage site, according to the spokesman for the country’s presidency. Ibrahim Kalin said that opening Hagia Sophia to prayer would not prevent people from visiting the site of what was the seat of the Orthodox patriarch of Constantinople, built in AD 537. “All of our major mosques such as the Blue Mosque, Fatih and Suleymaniye Mosques, they are open to both visitors and worshippers,” Kalin told Anadolu.

The decision, however, has once again revealed the polarisation between secular and religious Turks in the country, as many celebrated the decision while others believed it should have stayed a neutral venue. Most Turks did want the change however, and were expecting it for a long time.

The decision has received widespread criticism internationally, with most of the reactions being critical of the decision. The Russian Orthodox Church expressed dismay at Turkey’s decision to revoke the museum status of Hagia Sophia, accusing it of ignoring voices of millions of Christians. “The concern of millions of Christians has not been heard,” Russian Orthodox Church spokesman Vladimir Legoida said in comments carried by the Russian news agency Interfax. The Russian Orthodox Church previously urged caution over calls to alter the status of the historic former cathedral, and Russian Patriarch Kirill said he was “deeply concerned” about such a potential move and called it a “threat to the whole of Christian civilisation”. UNESCO said its World Heritage Committee would review Hagia Sophia’s status, saying it was “regrettable that the Turkish decision was not the subject of dialog nor notification beforehand”. “UNESCO calls on the Turkish authorities to open a dialog without delay in order to avoid a step back from the universal value of this exceptional heritage whose preservation will be reviewed by the World Heritage Committee in its next session,” the international body said. Furthermore, The European Union’s foreign policy chief Josep Borrell called the decision “regrettable”, and the US State Department spokesperson said in a statement “We are disappointed by the decision by the government of Turkey to change the status of the Hagia Sophia.”

Despite this, Turkey has received praise from the Arab and Islamic world on this matter. Ekrema Sabri, the preacher of Jerusalem’s Al-Aqsa Mosque, said in a statement, “We congratulate Turkey and ourselves for converting Hagia Sophia back to a mosque because it belongs to all Muslims,” The Grand Mufti of Oman, Ahmed bin Hamad al-Khalili, also offered his congratulations to Turkish President Recep Tayyip Erdogan and Muslims worldwide for reopening Hagia Sophia as a mosque. Meanwhile, the Muslim Brotherhood group described the Turkish decision on Hagia Sophia as a “historic step”. The Arab Maghreb Union also described the reopening of the Hagia Sophia mosque to worshippers as a “great historic event”.

Overall, the decision to convert the Hagia Sophia back into a mosque is a significantly important and historic one, and it is therefore unsurprising that the international reactions have been immediate and intense. Furthermore, this will put president Erdogan’s name in the history books. Erdogan’s role and aim will further be discussed in the next section.

Why did Erdogan make this decision?

It is clear that Erdogan was expecting a strong and negative international reaction, hence his public announcement 2 hours after the decision, where he mentioned that any attack on the decision would be considered an attack on Turkish sovereignty. This can be seen as a ‘show’ of Turkey’s geopolitical independence in Erdogan’s eyes, and a continuation of his defiance of international concerns in favour of domestic opinion, Turkey’s economic interests, and national security when it comes to geopolitical moves.

Domestically however, Erdogan has been facing criticism in recent months, and feels he has not consolidated his power. Although this ‘Turkey against the world’ attitude that Erdogan has instilled has helped in increasing his popularity and his grip on power, it eventually fades away as the domestic economic problems take their toll. Indeed, since Operation Peace Spring, Turkey’s economic problem’s have become more evident, especially after the Coronavirus crisis, and the country’s population have increasingly launched criticism towards the government. Turkey’s lira last week slipped to its weakest level since hitting a record low in early May after inflation for the month of June was reported at 12.6%, a figure that topped economists’ expectations. With rapidly shrinking foreign reserves to prop up the currency, inflation and currency devaluation are showing no signs of a turnaround, analysts say.

Furthermore, his ruling AK Party lost control of Istanbul and the capital, Ankara, in landmark municipal elections last year. This worsened the effects of the recent economic drop on his party.

Considering this, it is clear that Erdogan needed to regain his grip on the country, and mobilize the population based on their Islamic identity and Turkey’s sovereignity. The conversion of Hagia Sophia to a mosque checks both boxes. It has increased Turkey’s status as an assertive Muslim power. “Erdogan’s Hagia Sophia decree is a power move, both symbolically and geopolitically,” wrote Louis Fishman, an assistant professor at Brooklyn College. “It is, in many senses, the apex of his 18 consecutive years in power, enabled by his newly recharged international standing, and aimed to reinvigorate his standing domestically.’’ In a speech following the decree, the Turkish president linked Ankara’s decision to convert the structure into a mosque with a pledge to “liberate the Al-Aqsa Mosque” in Jerusalem as part of a pan-Islamic awakening. According to Fishman, Erdoğan’s choice of wording was carefully calculated.

As expected, the conversion of Hagia Sophia to a mosque was something that the political landscape in Turkey did not object due to its popularity. The opposition chose to remain silent, not because they agree with the move, but because they know this is not a battle they can win.

Despite this, some believe that the decision will not help Erdogan consolidate his power in the ling term. “Even if the Hagia Sophia conversion increases his approval rating by a few percentage points, the boost is unlikely to last,” said Soner Cagaptay, director of the Turkish Research Program at the Washington Institute for Near East Policy. He added: “Nothing short of strong economic growth will bring back the wider popularity he once enjoyed. Turkey’s international brand as an open, Muslim-majority society at peace with its Christian heritage” will be undermined.

Nevertheless, it is clear that the decision will help continue Erdogan’s desired narrative of placing Turkey as a powerful, independent and Muslim player on the world stage, which has consolidated his power in many cases and looks bound to do so again. However, if the economic situation does not improve, it may not be enough. Erdogan is aware of this, hence his statement two weeks ago, where he said that Turkey is in a “very strong recovery period” based on preliminary economic data for this June. A blend of the latest Hagia Sophia decision, and possible economic recovery, will most definitely tighten President Erdogan’s grip on Turkey, as well as place him in a prominent position in Turkey’s history.