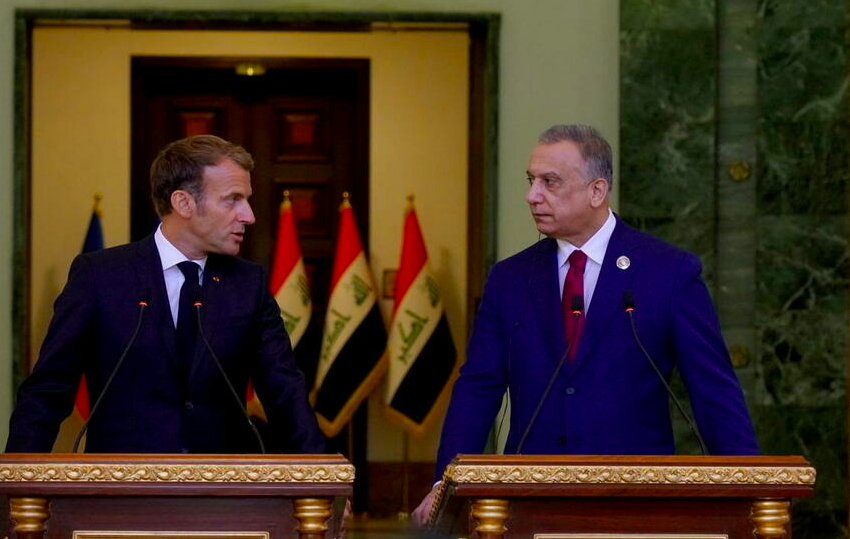 French President Emmanuel Macron was to pay a visit Sunday to the Islamic State group’s former Iraqi stronghold Mosul, a day after vowing to keep troops in the country.

It was the first such visit for a French president, he said.

Macron also met with young Iraqis, including entrepreneurs and students, at the University of Mosul.

He will later Sunday visit Arbil, capital of the autonomous region of Iraqi Kurdistan.

After a visit to French special forces at Camp Grenier, he will hold talks with Kurdish President Netchirvan Barzani, as well as his predecessor, Massud Barzani.

“I look forward to discuss bilateral ties, Iraqi elections and other pressing issues with President Macron. I remain grateful for France’s continued support to the Kurdistan Region and Iraq,” the Iraqi Kurdish president tweeted.

Macron also met the family of a Peshmerga fighter killed by IS, to pay tribute to the Kurdish contribution to the fight against the jihadists.

France says its troops will stay

Macron made the commitment during a regional summit in Baghdad largely devoted to the fight against terrorism and the impact of the Taliban’s takeover of Afghanistan as the US withdraws.

“No matter what choices the Americans make, we will maintain our presence in Iraq to fight against terrorism,” he told a news conference on Saturday.

On Sunday, the French leader will set foot in Mosul, a Sunni Muslim city recaptured from the Islamic State group (IS) in 2017 after three years.

His visit to Mosul, a melting pot of Iraq’s diverse ethnic and religious communities, is seen as an opportunity to renew his support for Christians in the Middle East.

Macron was to visit the Church of Our Lady of the Hour, a church that the UN’s cultural agency UNESCO is working to restore.

The French president also mentioned the current situation in Afghanistan, noting that France and the UK will plead for a safe haven in Kabul at the UN Monday, while the last French repatriation plane landed in Paris Sunday.

The expected arrival of Afghan migrants in Europe after the Taliban takeover will not be as large as the 2015 mass arrivals linked to the war in Syria, Macron said on Sunday.

“What is certain is that there are more people who will try to come to Europe, which will create pressure on our capacity to receive them,” he added.

France currently provides military support to Iraq, in particular airforce, with 800 soldiers deployed as part of a US-led international coalition against the Islamic State extremists.

In July, President Joe Biden said US combat operations in Iraq would end this year, but that US soldiers would continue to train, advise and support the country’s military in the fight against IS.

Will France replace the US in Iraq?

Doubts surround the ability of French President Emmanuel Macron to restore France’s influence in Iraq amid Iranian hegemony over the country’s  political system.

Iraqi analysts say that Macron’s vows regarding French presence in Iraq are reminiscent of his vows in Lebanon, which were scuppered because of the level of Iranian influence exercised on the Lebanese system through Hezbollah.

“No matter what choices the Americans make, we will maintain our presence in Iraq to fight against terrorism,”  as long as the Iraqi government wanted it, he told a news conference on Saturday.

During his visit to Mosul,  the French president voiced support for the Christians of Iraq in a way that is reminiscent of France’s guardianship over Christians in Lebanon.

This, according to analysts, seems to suggest that France is seeking to recreate the same conditions that led to its failed role in Lebanon.

Iraqi Christians in particular complain of discrimination and lack of assistance from the government in restoring their homes and properties confiscated during the conflict by powerful armed groups.

One analyst said that, “Macron can be helped in his mission by French companies that know Iraqi issues very well, from weapons to electricity to the Baghdad metro. The question however is whether France finances these projects”.

According to the analyst, “France is not in a comfortable financial situation and neither is Iraq, which can be considered a bankrupt country after the successive pro-Iranian governments since 2006 squandered all the money that entered the treasury at a time when the price of a barrel of oil was quite high.”

France has lost its influence in Iraq since the 1991 war, when the late French President Francois Mitterrand decided to join the US-led coalition to liberate Kuwait. Paris had maintained a high profile presence in Iraq during the eighties.

Another obstacle to France’s ambitions is Iraq’s increasingly visible intent to shift away from being the subject of foreign influence, and towards becoming an important regional player itself and rather a partner to other regional powers. Iraq’s regional allies stressed Saturday the need to provide support to an OPEC member struggling to rebuild after decades of ruinous wars, in a conference that also afforded a platform for meetings between longtime rivals.

Another factor that must be considered that could hamper the possibility of French expansion in Iraq is Turkey and its hard power in Northern Iraq and its large geopolitical and economic influence on the Iraqi Kurdistan government, as well as its increasingly strong strategic ties with the Iraqi government. The latest sign of this trend is the fact that Iraq has reached a preliminary deal to purchase a multimillion arms package from Turkey, including armed drones, attack helicopters and electronic warfare systems, which Iraqi defense minister Juma Inad said on Friday in televised remarks.

Juma told the Iraqi channel Al Sharqiya that Baghdad had reached an understanding with Ankara to purchase 12 T-129 ATAK helicopters that are produced by Turkish Aerospace Industries, six Koral electronic warfare systems manufactured by Aselsan, and an unspecified number of TB2 Bayraktar armed drones as part of the deal.

One Turkish defense industry source, speaking anonymously, told Breaking Defense that the negotiations between Turkey and Iraq had been underway for more than a year on the TB2, which Turkey has recently exported to a number of countries, including Azerbaijan, Libya and Poland. The source said Iraq was interested in at least a dozen armed drones.

Despite the comments from Juma, a senior Turkish government official said the deal wasn’t sealed yet — in part because of lingering questions about whether the helicopter sale will receive necessary clearance from the United States.

The T129 relies on two LHTEC T800-4A engines, which are manufactured through a joint venture between the US firm Honeywell and the British company Rolls-Royce. US law requires foreign companies to obtain export permits for high-end defense articles, including the engines.

Even if the US attempts to block the purchase, Iraqi Turkish ties continue to accelerate, while France has not yet established a strong enough foothold to be considered a major player in Iraq, and such prospects are unlikely to succeed.