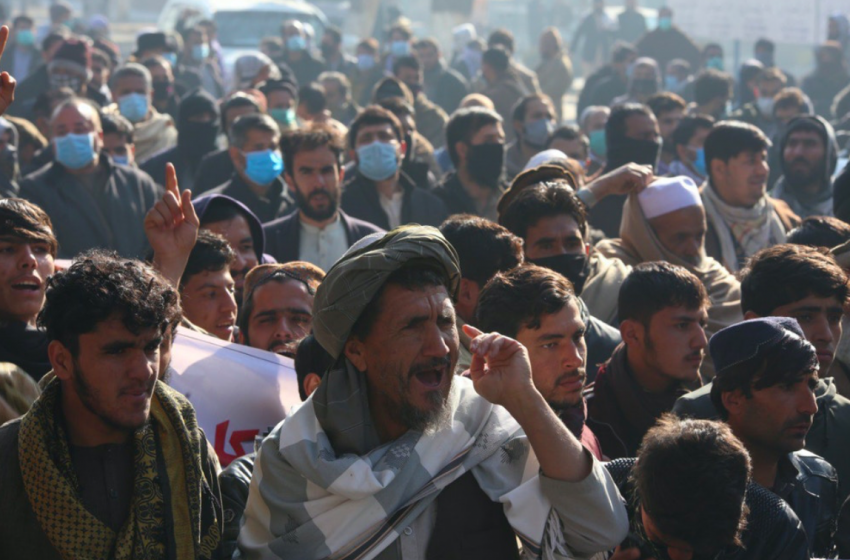 As 2022 begins, most people in Afghanistan don’t have enough food to eat. Millions are facing hunger and starvation amid a multiyear drought and an economic crash following the Taliban takeover in August. The onset of winter has only made things worse.

Shelley Thakral, the World Food Program spokesperson for Afghanistan, says more than half the population — some 23 million Afghans — are facing what the WFP calls extreme levels of hunger. Malnutrition is soaring. Food prices have risen. And the WFP’s surveys show the overwhelming majority of Afghans, 98% of the population, lack enough food to eat. Many are surviving on limited diets with less fresh vegetables, dairy or meat – or none at all.

Afghanistan has seen other hunger emergencies over the years — in some areas, people two decades ago were so desperate that they resorted to eating grass. But now, for the first time, there is a “new urban class of hungry people,” Thakral says. Afghans who’ve lost their jobs and never imagined they’d go hungry are scrounging and standing in line for food aid.

Thakral says the WFP is boosting its distribution of food rations such as wheat, flour, oil, salt and pulses and needs $2.6 billion, or $220 million per month, to keep Afghans fed in the year ahead.

With a record 23 million people – more than half the population – struggling to eat, the U.N. World Food Programme (WFP) country representative Mary-Ellen McGroarty said Afghanistan is facing a “tsunami of hunger.”

Farmers often move to look for jobs in lean times, but the economic crisis has scuppered other labor options.

“It’s created a complete catastrophe. It’s taken away Plan B,” McGroarty said from the capital, Kabul.

“I’ve had women drop at my feet screaming for assistance. I’ve met many men who are scavenging in bins for dry bread to feed their kids.”

When she traveled to the northern province of Badakhshan, elderly farmers who had lived through 19 governments told her they had never seen it so bad.

“They told me they nearly preferred the war to the torture and torment of the hunger they were facing,” she said.

Malek, a 25-year-old farmer from western Afghanistan, used to supplement his income from growing chickpeas, wheat and cumin with casual labor – but nobody is hiring.

He has started selling the few sheep he bought for breeding. Other Afghans are selling everything from motorbikes to jewelry and land. Some are marrying off young daughters for income.

“Winter will be very, very difficult,” said Malek, who only uses one name. “Many people will have to sell assets to buy food.”

Many men in his region have gone to Iran. Malek was considering joining them, but recently received wheat seeds from the Food and Agriculture Organization (FAO), which he hopes will help him stay put.

Hunger and destitution seem “poised to kill more Afghans than all the bombs and bullets of the past two decades,” the International Crisis Group (ICG) think-tank said, calling donors’ suspension of all but emergency aid “the biggest culprit.”

But finding a way to avert catastrophe has been complicated by a slew of long-standing U.N., U.S. and other sanctions on the Islamist group, which remains a designated terrorist organization.

The role of sanctions

Western sanctions have dealt a heavy blow to the aid-dependent country, forcing international NGOs to stop operations in the country.

The UN and other aid agencies have since tried to navigate the sanctions to deliver much-needed aid to the country, as public hospitals became unable to afford essential medical supplies or to pay staff salaries.

Ironically, aid workers’ access to vulnerable communities has rarely been better. With the end of fighting, the FAO can reach all 34 provinces, up from 25 in mid-2021.

But aid agencies need money and resources. The WFP alone requires $2.6 billion for the coming year.

The FAO and WFP said the Taliban understood the massive need for aid and were allowing female staff to work, despite imposing restrictions on other women.

The Taliban’s victory marks the first time a sanctioned group has taken over a country, presenting the international community with a dilemma.

The United Nations, World Bank and donors are looking for ways to inject money into the economy without going through Taliban authorities.

In December, the World Bank released some of the $1.5 billion sitting in the frozen Afghanistan Reconstruction Trust Fund – the previous government’s largest source of funding – to the WFP and U.N. children’s agency UNICEF.

The United Nations has also paid thousands of health worker salaries, bypassing the health ministry, and set up a trust fund to provide grants to small businesses and work for the unemployed on infrastructure projects.

But analysts say piecemeal fixes will not be enough to avert the country’s collapse.

The ICG think-tank urged the international community to unfreeze assets, ease sanctions and engage with the Taliban to restore basic services including central banking.

“We’re preparing for the world’s biggest aid operation, but maintaining economic restrictions that are increasing the need for aid by the day. It’s self-defeating,” said ICG consultant Graeme Smith.

As Paul Spiegel, director of the Center for Humanitarian Health at Johns Hopkins Bloomberg School of Public Health, wrote this December, after returning from a trip to Afghanistan on behalf of the WHO, “I can clearly state that if the United States and other Western governments do not change their Afghanistan sanction policies, more Afghans will die from sanctions than at the hands of the Taliban.”

The deaths will be brought about to a large extent as a result of deliberate policy decisions made in the U.S. Alongside new sanctions imposed after the Taliban takeover, the U.S. froze nearly $10 billion of Afghanistan’s central bank holdings here. The Biden administration refuses to release the funds despite ongoing public protests by Afghans.

Rajeev Agarwal, the chief financial officer of KEC International, an Indian firm tapped to build electric utility transmission lines in Afghanistan, told investors in October that its five projects in the country suddenly ceased payments in August. The “U.S. has choked all the funding lines to Afghanistan,” reported Agarwal, according to a transcript of the call.

“Sanctions are intended to have a chilling effect, in that sanctions will always go beyond the face of the text,” said Adam Weinstein, a research fellow with the Quincy Institute for Responsible Statecraft. “No bank or business wants to walk right up to the line when it comes to compliance with U.S. sanctions policy, given that these are risk-averse institutions.”

Sanctions are one of the bluntest coercive tools in the U.S. foreign policy toolkit — and happen be a favorite of policymakers, even as they rarely produce political results. The sanctions on Iran were intensified under the Trump administration but have continued under President Joe Biden, as part of a desperate effort to force a total capitulation over Iran’s nuclear program. These tactics have until now failed.

Other factors and ways out

Afghanistan’s economy was already troubled when the international community froze billions of dollars worth of Afghanistan’s assets abroad and stopped all international funding to the country after the Taliban seized power in mid-August amid a chaotic US and NATO troop withdrawal. The consequences have been dire for a country heavily dependent on foreign aid.

Corruption was a major cause of poverty before the US withdrawal even began, and Afghanistan’s economy was already heavily struggling. Now that the former Afghan government have taken their money and assets with them, this corruption has not been undone.

In addition to this, the Taliban leadership is inexperienced in managing the economy of the entire Afghan state, as its previous regional economic measures and means were less complex.

The Taliban administration is working to boost exports to save the Afghan economy from collapse, with a government official saying international humanitarian aid alone won’t prevent the country from slipping deeper into poverty.

Afghanistan’s envoy to Pakistan has praised the Organization of Islamic Cooperation for working to connect the country to the outside world and lauded Saudi Arabia for its crucial humanitarian assistance.

The Taliban has said it is expanding its “food for work” programme, in which donated wheat is used to pay tens of thousands of public sector workers.

It comes as the United Nations (UN) has appealed for $4.4bn (£3.2bn) in humanitarian aid for Afghanistan.

The UN says the funds are needed this year as more than half the country’s population is in need.

However, although there is still hope and possible avenues of income and welfare, with most of its assets frozen, the Afghan economy must receive humanitarian aid to kick -start a process of economic recovery.