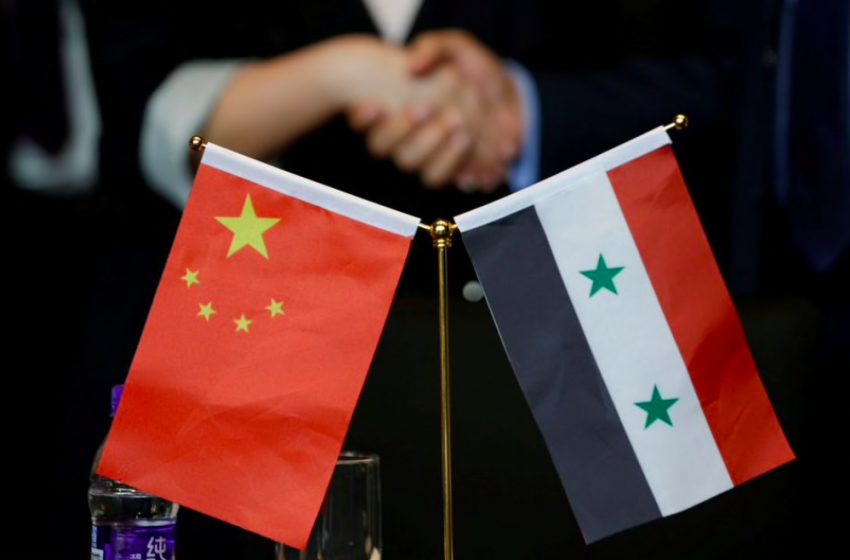 Last week, Syria’s President Bashar al-Assad was re-elected with 95 percent of the vote. He has been keen to portray the poll as a sign that the country is returning to normality after a decade of chaos and civil war. That is important if he wants to attract outside investment in order to rebuild the country.

Assad’s victory was treated skeptically in Western countries, where officials have shared the Syrian opposition’s view that the poll was neither free nor fair. By contrast, Assad’s Russian and Iranian allies have endorsed the result. They were followed by Belarus and China.

The Chinese endorsement will be especially welcome for Assad as he looks to leverage it into a more tangible form of assistance. Previously, he has played up the Sino-Syrian connection as a way to demonstrate that he is not diplomatically isolated and that he has a number of potential partners to support his reconstruction efforts.

“China firmly supports Syria in its safeguarding of its sovereignty, independence and territorial integrity,” he added.

Throughout the Syrian civil war, China has played a relatively low-profile role. Since the conflict broke out, Beijing has been cautious and pragmatic about its approach.

Having access to outside capital is vital for Syria’s reconstruction, since it is highly unlikely that domestic sources will be sufficient. In 2017 the World Bank calculated that Syria’s economy had shrunk by $226 billion between the start of the uprising in 2011 and 2016 – twice the country’s total GDP. A year later that estimate had risen further, to $350-400 billion.

Such figures are astronomical. They also dwarf the current and ongoing assistance from Russia and Iran to sustain the Assad regime throughout the war. The highest estimates put Russian and Iranian assistance at $7 billion and $23 billion, respectively. Even if such figures are matched in the postwar period, they will not come near to the amount required.

For that reason, China has become a more attractive proposition for some in Damascus, especially since other forms of foreign capital – including from the West – are likely to remain unavailable so long as Assad remains in power. Indeed, Assad has already expressed interest in joining China’s Belt and Road Initiative, while his officials have tried to attract Chinese investment in a range of projects, including the construction of a north-south-east highway, the re-development of the ports of Latakia and Tartus, and the construction of railroads, one in the Damascus region and another that would connect with the Lebanese port of Tripoli.

Trade and investment between China and Syria has typically been modest, even before 2011. Since then it has not grown substantially either. In 2015, Huawei expressed interest in rebuilding Syria’s telecommunications system and in 2017, China pledged $2 billion to help develop infrastructure and industrial parks. Such figures are in addition to the $60 million that China has provided in various forms of humanitarian assistance during the war.

The limited level of Chinese investment in Syria must also be set in context. The bulk of Chinese commercial activity is elsewhere in the Middle East, mainly in the Gulf – especially Saudi Arabia, Iran, and the UAE – and North Africa – Egypt and Algeria in particular. Moreover, Chinese financial commitments in the region may have already peaked. According to the American Enterprise Institute, which monitors Chinese capital around the world, investments in the Middle East have declined since 2018 the year that President Xi Jinping pledged $23 billion in loans for the region as a whole at the China-Arab States Cooperation Forum.

Why China will not expand its presence in Syria

There are several reasons why China will not expand its presence in Syria.

Several are related to risk. One is that although the war may be coming to an end in Syria, it does not mean an end to conflict. Substantial parts of the country remain outside of Assad’s control and foreign troops remain on Syrian territory, including Turkish and American forces. Chinese investors may be wary of the continuing volatility.

China’s perceived security interests far outweigh economic incentives in Syria. Beijing considers rebel-held territories in the northwest of the country ‘terrorist hotbeds’. It is especially concerned about the ethnic Uyghur fighters who have joined the al-Nusra Front (now Hayat Tahrir al-Sham), the Turkistan Islamic Party and Katibat al-Ghurba al-Turkistan. While the exact number of Uyghur fighters and jihadists is unknown, China’s special envoy to Syria Xie Xiaoyan has claimed the number to be as high as 5000. Beijing would likely rather see these fighters killed in combat; their capture or repatriation could be seen as a potential threat to their domestic national security.

Another risk is the impact that international sanctions might have. Syria is subject to a wide range of sanctions and the United States has shown its willingness to enforce them. That has incentivized some financial institutions to avoid involvement in the country, including some Hong Kong banks that fear being blacklisted as a result.

A third challenge is that Chinese capital and firms may get caught up in games that are beyond their control. Assad has shown himself prepared to exploit any opportunities available to him, including playing his own partners against each other. Both Russian and Iranian officials and businesses have competed to gain the ear of the regime in order to acquire potentially lucrative contracts for themselves. Assad could well seek to do the same with Chinese firms. Not only would that provide problematic for them, having to navigate between Syrian, Russian, and Iranian interests, but owing to their previously limited involvement in the country, they would also have the disadvantage of being less familiar with the local terrain.

In sum then, the material benefits of the “Chinese dream” may turn out to be less profitable than they appear.

This could change in the long term

Although at its current state, Syria remains an unattractive target of investment, the nation’s geo-strategic importance and its prospects of economic expansion mean that China is certainly planning an expanded role in Syria in the long term, once stability returns.

For any substantial reconstruction effort, Beijing would need a durable political solution to the conflict. Beijing will have to wait and observe the general peace process, including what the 2021 presidential elections may bring, before taking any steps in that direction, but it is unlikely that much will change.

One of the ways in which China could work towards the realization of this, is its involvement in the political peace process in Syria. Indeed, China has shown interest in this prospect.

A Chinese envoy on Wednesday called for efforts to promote the political settlement of the Syria crisis, improve the security situation, and address the challenges in economic and humanitarian sectors.

The decade-long Syria crisis has led to worrisome security and humanitarian situations. The United Nations, the Security Council, in particular, must step up efforts toward an early end to the crisis to alleviate the suffering of the Syrian people, said Zhang Jun, China’s permanent representative to the United Nations.

“We must spare no effort in pushing for a political settlement of the Syria issue,” he told the Security Council.

China supports the work of UN Special Envoy Geir Pedersen in promoting the implementation of Security Council Resolution 2254, which provides for a roadmap for a political settlement. China calls on all parties in Syria to maintain communication with Pedersen and advance the work of the Constitutional Committee on the basis of existing consensus. The Constitutional Committee must work independently, free of external interference, he said.

There is a need to ensure that the political process is Syrian-led and Syrian-owned, he added. Zhang asked for efforts to improve the security situation in Syria.

Many council members are concerned about terrorist activities within Syria and their spillover risks. The international community must work in synergy and jointly combat terrorism in Syria in accordance with international law and Security Council resolutions, he said.

This Chinese initiative has a clear aim in mind, to create a stable Syria that would facilitate Chinese investment and opportunities, and act as a valuable geopolitical ally.

For China’s BRI ambitions, Syria and Lebanon represent a route to the Mediterranean that is an alternative to the Suez Canal. Through large investments in ports in the eastern Mediterranean, the Chinese are seeking to revive historic Eurasian trade corridors that connect China to Europe, Africa, and elsewhere. Without question, the incorporation of the port city of Tartus and Damascus into the BRI would strengthen China’s economic position in the Levant.

However, it is safe to bet that China will continue efforts to deepen its partnership with Syria, not only to remain a key player in the country’s reconstruction but also to invest in good relations with Damascus for geopolitical purposes. However, China views this as a long term process that can only take full effect once there is relative political stability in Syria.