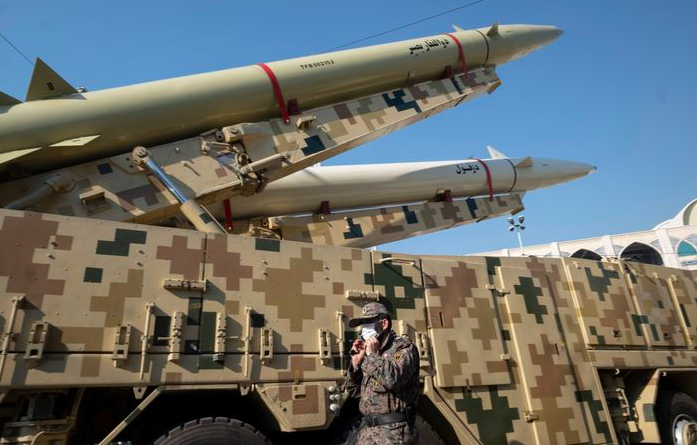 Israel and the Gulf have increased the scope of their military cooperation in recent months, stimulated by the recent Abraham accords. Reports over the weekend said that Iran was upping its rhetoric against any sort of US-backed air defense pact that might link Israel and several Arab countries together.

Will the concept of a “Middle East Air Defense Alliance” group come into being? This is the terminology that has been reported in Reuters and other media since June. Defense Minister Benny Gantz has backed this concept. US lawmakers also want to push the “DEFEND” act which is supposed to build on the Abraham Accords. Washington also wants to counter Iranian drones.

Israel and its new friends in the Gulf have indeed had many more meetings in recent years. Gantz recently said there had been 150 of those meetingsand some $3 billion in arms sales.

On a visit to the Mideast this week, President Biden intends to push for deeper, and more public, security partnerships among the onetime adversaries, U.S. officials said.

Turning the spotlight on these defense ties during Mr. Biden’s four-day trip to Israel and Saudi Arabia could test the limits of how openly Arab countries are willing to embrace Israel, which for decades has operated in the region’s shadows as it has contended with Tehran.

And in the most sensitive effort yet, Israeli and Arab military officials confer together at U.S. Central Command—the American military hub for the Middle East—as they try to develop a new air-defense pact to protect like-minded countries from threats posed by Iran and its allies. U.S. national security adviser Jake Sullivan told reporters that Mr. Biden would seek to increase Israel’s integration into the region during the trip and coordinate around facing the threat from Iran.

“It appears to be the dawn of a new chapter in Middle East security,” said Jonathan Schanzer, senior vice president for research at the Foundation for Defense of Democracies, a Washington think tank critical of Iran. “The key now is for these actors to institutionalize these gains.”

The Biden administration is trying to bring Israel and its Arab neighbors together in a regional air-defense partnership that would be designed primarily to protect the countries against threats from Iran and its allies.

Efforts to do so have been hampered by the U.S. administration’s strained relationship with Saudi Arabia, which has resisted pressure from Washington to shift course on key issues, including oil production and human rights.

Another stumbling block is both Israel and Saudi Arabia’s skepticism with regards to normalization.

Most Israelis lack faith in US President Joe Biden’s ability to represent Israel’s interests, and they are split on the prospect of a breakthrough in diplomatic relations with Saudi Arabia during his visit, according to new polls released Monday.

The polls — the latest monthly Israeli Voice Index and a special survey on Biden’s visit, both by the Israel Democracy Institute — showed that Jewish and Arab citizens are wary of Biden’s ability to take Israel’s concerns into account in negotiations with Iran. They also are not hopeful about the prospect of peace with the Palestinians in the near future.

The polling was conducted in the lead-up to Biden’s first trip to the Middle East as president, but his tenth visit to Israel overall. He is set to land at Ben Gurion Airport on Wednesday, for a visit that will include Israel and the West Bank, before leaving for Saudi Arabia on Friday for a Saturday meeting with regional Mideast leaders as part of the GCC+3 summit (the Gulf Cooperation Council — Bahrain, Kuwait, Oman, Qatar, Saudi Arabia, and the UAE, along with Iraq, Egypt, and Jordan).

The visit carries the hope of some form of breakthrough in ties between Israel and Saudi Arabia, and a glaring absence of a peace push with the Palestinians.

According to the special survey on Biden’s visit, 44 percent of respondents said that they believe in the US president’s ability to effect a peace agreement between Israel and the Saudis, and 44% said they did not.

Saudi Arabia has not normalised relations with Israel. But recent years have seen de-facto rapprochement between the two countries that view Iran as a common foe. The kingdom has allowed some Israeli flights to use its airspace en route to the UAE, which is deepening commercial and diplomatic ties with Israel.

Saudi officials have repeatedly voiced commitment to the 2002 Arab Peace Initiative, which states that Arab countries would normalise ties with Israel in exchange for establishing a sovereign Palestinian state and finding a “just settlement” for Palestinian refugees forcibly displaced during the founding of Israel in 1948.

Still, Biden has suggested that he will push for normalisation between the kingdom and Israel during his trip to both countries next month. He will fly directly from Israel to Saudi Arabia where he is expected to meet with Crown Prince Mohammed bin Salmanand other regional leaders in Jeddah.

“What I want to do is see to it that we diminish the likelihood that there’s a continuation of some of these senseless wars between Israel and the Arab nations. That’s my focus,” the US president told reporters early in June when asked about visiting Saudi Arabia.

Earlier this month, Israeli officials hailed the prospect of further normalisation with Arab countries in the context of Biden’s visit. Axios quoted Israeli foreign minister Yair Lapid as saying that the US president’s trip can “improve ties” between Israel and Saudi Arabia.

“We want a peace agreement with Saudi Arabia,” Lapid said.

After US officials confirmed Biden’s July trip to the Middle East, Prime Minister Naftali Bennett’s office also said the visit will “reveal the steps that are being taken by the US to integrate Israel into the Middle East”.

Iran-Israel tensions have reached a boiling point in recent weeks. Israeli defense Minister Benny Gantz on Thursday ordered his ministry’s security department to conduct an investigation into recent media leaks that harmed Israel’s “ambiguity policy,” shortly after Hebrew-language television strongly hinted that a Military Intelligence unit was responsible for a cyberattack in Iran. One of Iran’s major steel companies said Monday it was forced to halt production after being hit by a cyberattack that also targeted two other plants, apparently marking one of the biggest such assaults on the country’s strategic industrial sector in recent memory.

On June 30, the Iranian hitmen, at first, were going to eye an attack on a former Israeli consulate Yosef L.S. and his wife. The group was then going to attack a group of Israeli tourists in [the district of] Beyoğlu. The five hitmen were planning successive damage to Israel on two different occasions, the daily hinted. Two weeks ago, Turkish National Intelligence Organization (MİT) busted the Iranian intelligence service SAVAMA and caught five hitmen and five guides helping them. It was stated that members of the intelligence service were undercover as students and the Revolutionary Guards as businesspeople and tourists for the attack which was caught in the planning stage.  Iran appointed a new commander to head the powerful intelligence service of its Islamic Revolutionary Guard Corps (IRGC) with no reason given as to why the previous chief left the job.

Pro-Iranian hackers launched a cyberattack Monday on what they described as “the Tel Aviv metro” – the light rail system under construction – the latest in a long list of incursions either linked to Iranians or aimed at Iran.

Iran has said air-defense cooperation would be destabilizing. “Trying to create new security concerns in the region will have no result other than weakening common regional security and serving the security interests of the Zionist regime,” said Nasser Kanani, a spokesman for Iran’s Foreign Ministry.

Tehran has also threatened to strike out at the U.A.E. and Bahrain if they allow Israel to place military installations in their countries.

The recent rise in tensions between Israel and Iran has led the US and Israel to accelerate efforts to expand military ties with the Gulf countries, including Saudi Arabia. Despite the obstacles, Saudi-Israel normalization appears to be closer than previously thought, as former Israeli PM Netanyahu uncovered in recent days the special role of Saudi Arabia’s MBS in the normalization between Israel & the UAE, Bahrain, & Morocco. By uncovering MBS’ role & thanking him. Normalization is therefore most probably on the horizon.