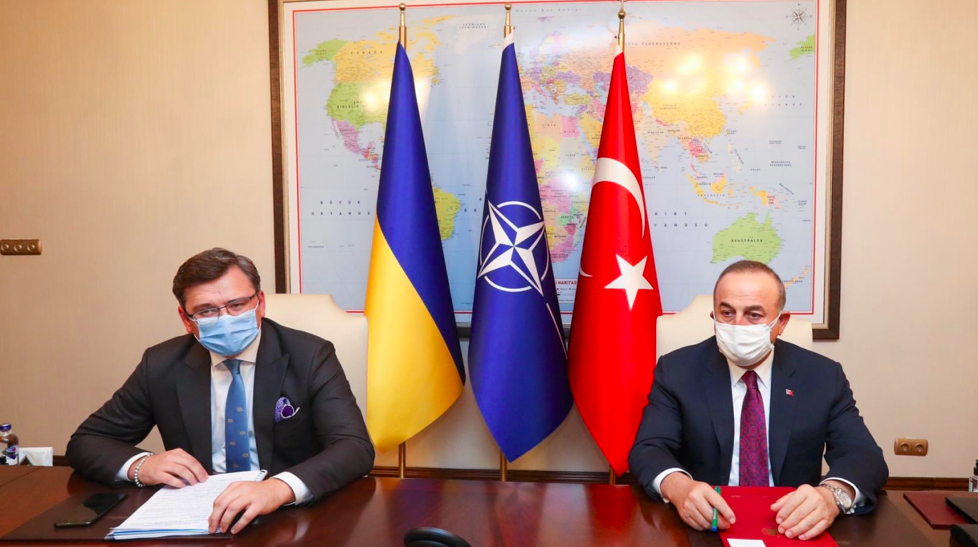 Cavusoglu: “We conveyed greetings of President Erdogan to President Zelenskiy. Our bilateral relations with Ukraine are at an excellent level.”
Cavusoglu also met Ukraine‘s Foreign Minister Kuleba. Kuleba: “Glad to welcome my friend Cavusoglu in Kyiv on this historic day. We launch a new Ukrainian-Turkish “Quadriga” format. Important 2+2 dialogue to ensure peace and stability.”

Cavusoglu also received the “Angel of Good” award in Ukraine.

Cavusoglu: “Honored to address the Ukrainian Ambassadors Conference and to receive the “Angel of Good” award. Sincere thanks to my friend Dmytro Kuleba and to the people of Ukraine.”

Relations are already on the high, especially in the defense sector, as last month, a joint venture company with Turkey to domestically produce as many as 48 of the Turkish Bayraktar TB2 combat drones that lately helped give Azerbaijan a decisive edge in the six-week Nagorno-Karabakh conflict. News of the deal came from Vadym Ihorovych, general director of Ukrspetsexport, a state-owned Ukrainian defence manufacturer, who was interviewed by online publication Left Bank. The drones built in Ukraine would be slightly different from the ones manufactured in Turkey, Ihorovych said.
Ukraine today stands out as Turkey’s main partner in a number of critical military technologies, inter alia turbo prop and diesel engine, avionics, drone, anti-ship and cruise missiles, radar and surveillance systems, space and satellite technologies, robotic systems, active and passive shielding systems and rocket engines and guidance systems.

Is Turkey trying to corner Russia?

As Turkey strengthens its defense partnership with Ukraine in recent months, it has become increasingly visible that Russia may be the target of this geopolitical move by Turkey, and Turkey could be trying to corner Russia, and therefore limit Russia’s external influence.

Russia being the target of this move is further supported by the fact that Ukraine’s territorial integrity was put at the forefront of the latest meeting. Turkey’s foreign minister on Dec. 18 said the dispute in the Donbas region of eastern Ukraine should be solved within “territorial integrity.”

“The problem at the Donbas region should be solved within the territorial integrity and we are happy that the ceasefire continues, despite some small breaches,” Mevlüt Çavuşoğlu said on an official visit to Ukraine.

In addition to this, Turkey is willing to support the Russia-annexed Crimean peninsula’s return to Ukraine, Turkish Foreign Minister Mevlut Cavusoglu said Wednesday.

The statement comes amid an already uneasy relationship between Moscow and Ankara, which are traditionally partners but have recently been at odds over the Nagorno-Karabakh conflict, the Syrian conflict and Libya’s civil war. In October, Turkish President Recep Tayyip Erdogan said that Turkey does not recognize the 2014 annexation of Crimea and will continue to support its territorial integrity as “part of Ukraine.”

The first Crimean Platform summit is expected to be held next May, with representatives from Turkey, France, Germany, Britain and the U.S. set to attend.

This comes after Turkey played a big role in Azerbaijan’s victory over Armenia in Karabakh, another country that borders Russia and Turkey has very close ties with. The Armenia-Azerbaijan conflict offered Ankara an opportunity to expand its relationship with Russia into a new theatre where it had a stronger hand. The strengthening partnership with Ukraine could very well have the same aim.

The deepening of Turkey-Ukraine defense ties has alarmed Moscow and may be payback, Tastekin writes, “for Russian efforts to undermine Turkey’s agenda in the wars in Libya and Syria, where Ankara and Moscow support rival groups.”

As Russia appears to be the likely main target of this partnership, Turkey could also be looking to gain the US’s favour, specifically incoming president Joe Biden. The Obama administration, under which Biden was vice president, was heavily concerned and involved in the Crimean crisis, and strongly supported Ukraine’s territorial integrity, a position which Turkey is now emphasizing, possibly to gain Biden’s favour.

In January 2020, Biden called Erdogan an “autocrat”  and said that he should “pay a price.” Erdogan said he is “no stranger to Biden,” adding that “we have known each other closely since the Obama era. He even had come all the way to my home and visited me at my home when I was ill,” while pointing out that he “doesn’t approve of US steps regarding the east of the Euphrates in Syria and Turkey’s weapons procurement.”

No doubt Erdogan is seeking opportunities to right US-Turkey ties and will want to get off on the right foot with Biden. And the friction with Russia and Iran has always been just below the surface.

The many issues that make up the baggage in US-Turkey relations are more likely to be unpacked in a Biden administration. Biden is himself a skilled diplomat, and the US and Turkey have compelling reasons to find common ground where it can be found, while giving up the notion of  US-Turkish “alliance,”  which as Philip Gordon points out is mostly nostalgia.

A strengthening defense partnership with Ukraine directed at the Russian threat could therefore be Turkey’s key to repairing relations with the US.