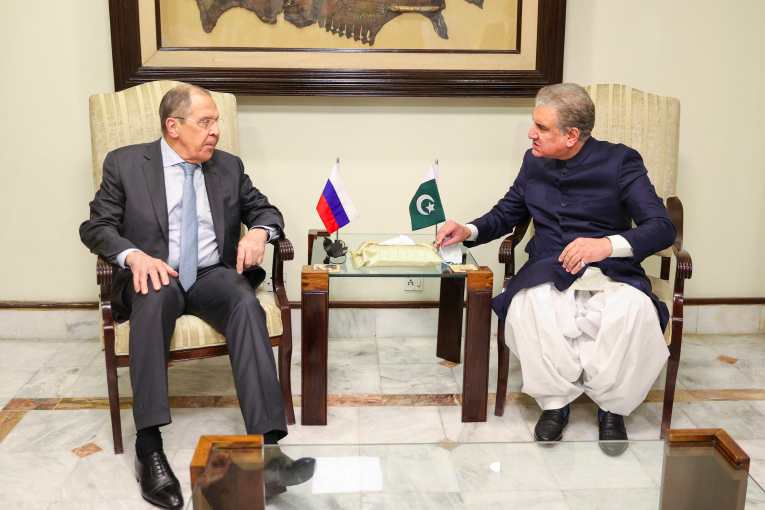 Russia’s foreign minister on Wednesday said Moscow and Islamabad will boost ties in the fight against terrorism, with Russia providing unspecified military equipment to Pakistan and the two holding joint exercises at sea and in the mountains.

Sergey Lavrov spoke on the second day of a two-day trip to Pakistan. It’s the first visit by a Russian foreign minister in nine years, part of a warming of frosty relations.

“We stand ready to strengthen the anti-terrorist potential of Pakistan, including by supplying Pakistan with special military equipment,” Lavrov said, without going into detail about the equipment.

He said Russia was committed to promoting bilateral cooperation with Pakistan in diverse fields including economy, trade and defence. He expressed satisfaction over the 46 per cent increase in bilateral trade but noted that there was a potential to increase and diversify it.

Meanwhile Russia is also building a gas pipeline between the southern port city of Karachi and eastern Lahore. Pakistan’s Foreign minister Shah Mahmood Qureshi said Islamabad will also buy 5 million doses of the Russian made COVID-19 Sputnik V vaccine, and expressed a desire to eventually manufacture it in Pakistan. He said Pakistan also wanted Russian expertise to modernize its antiquated railway system as well as its energy sector.

The visit underlines the waning influence of the United States in the region, while Russian and Chinese clout grows, says Michael Kugelman, Deputy Director of the Asia Program at the U.S.-based Wilson Center.

Pakistan could certainly use Russian military equipment, especially after the US blocked the former’s purchase of Turkish military helicopters. Pakistan wants to reduce its military dependence on the US, and increase its ties with the powers in the East, China, and now Russia.

Afghanistan important to both sides

Moscow seeks to increase its stature in the region, particularly in Afghanistan, where it seeks to inject itself as a key player in efforts to find a peaceful end to decades of war.

Washington is reviewing an agreement it signed more than a year ago with the Taliban as it rethinks a May 1 withdrawal of U.S. troops from Afghanistan. Meanwhile, Moscow has stepped up its involvement there and hosted talks last month between the Taliban and senior Afghan government officials. Lavrov suggested another high-level meeting could again be held in Moscow.

Pakistan was a staging arena in the 1980s for anti-communist Afghan rebels aided by the U.S. to oust the Soviet Union, which in 1989 negotiated an end to its 10-year occupation of Afghanistan.

Pakistan understands that Russia has become an important player in the Afghan peace process, and is therefore welcome to Russian attempts to enhance its understanding with Pakistan on the issue.

Lavrov’s visit to Pakistan comes as a May 1 deadline for the withdrawal of US troops from Afghanistan looms large. Agreed in a peace agreement signed between Washington and the Taliban, the withdrawal is looking increasingly unlikely given the increase in violence in Afghanistan.

Direct peace talks between the Afghan government and the Taliban commenced last year in the Qatari capital Doha, but progress has been slow and violence has spiked even as negotiators continue discussions.

Russia held a one-day meeting of the “extended troika” on March 18, hosting members of the Taliban and the Afghan government, as well as Pakistani, Chinese and US representatives, in an effort to spur the peace process.

A response to India?

Lavrov arrived in Pakistan on Tuesday from neighboring India, with which Moscow has had a long and solid relationship. The apparent reset in Pakistani-Russian relations, however, is by contrast a more recent phenomena.

Pakistan’s intent to strengthen ties with Russia could be to counter India’s strengthening ties with the latter in recent months, as Pakistan cannot risk Russian alienation on sensitive issue such as the Kashmir problem.

India and Russia on Tuesday discussed a range of issues including defense, trade, and regional connectivity.

India’s External Affairs Minister Subrahmanyam Jaishankar addressed a joint news conference with his Russian counterpart Sergey Lavrov, who was on a two-day visit to India, in the capital New Delhi.

“We talked about the longstanding partnership in nuclear and defense sectors,” Jaishankar said. “We also found an appetite for greater investment in each other’s countries.”

He said ties with Russia are time-tested and the two sides also discussed a summit meeting between Premier Narendra Modi and President Vladimir Putin later this year.

Asked about India planning to obtain additional S-400 missile systems from Russia, he said no such discussions took place.

Ofcourse, India’s prospects of a strong strategic partnership with Russia, are a worry to Pakistan, as it risks getting territorially surrounded by hostile states, especially if Russia aligns with India on geopolitical issues involving Pakistan.