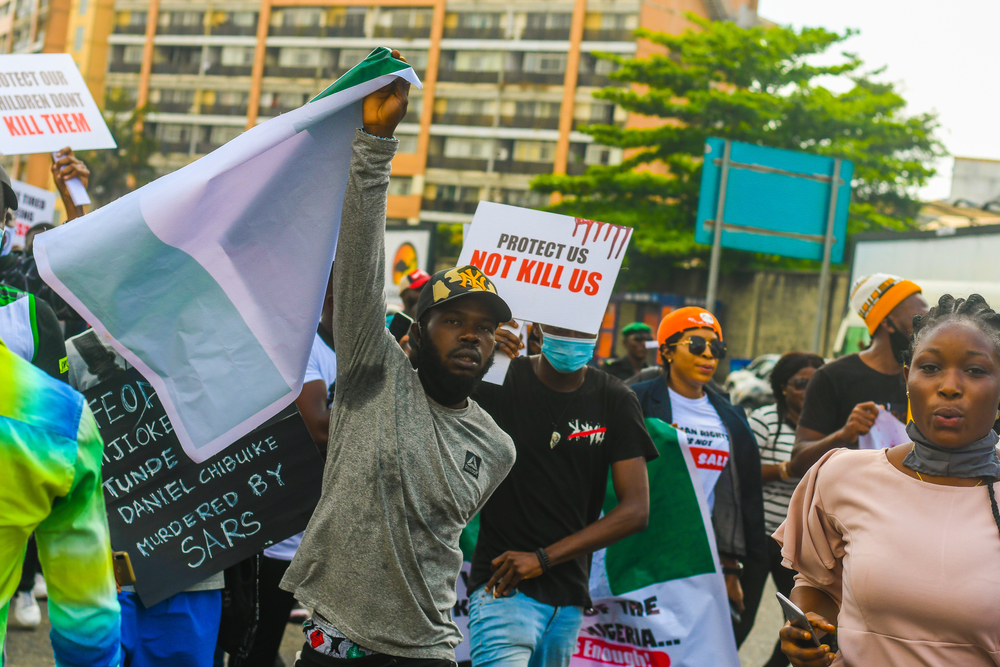 Why are Nigerians protesting?

For two weeks, Nigeria has been rocked by protests that erupted against police violence and evolved into broader anti-government demonstrations, leading to a deadly crackdown.

Young people mobilising through social media began staging demonstrations calling for the abolition of the federal Special Anti-Robbery Squad (SARS), which has long been accused of unlawful arrests, torture and extrajudicial killings. The protests were sparked by a viral video allegedly showing SARS officers killing a young man in the southern Delta state. Authorities denied the video was real.

The man who filmed the video was arrested, provoking even more anger. With the demonstrations against SARS growing in size, the government on October 11 was forced to dissolve the controversial unit on October 11.

“The disbanding of SARS is only the first step in our commitment to extensive police reform in order to ensure that the primary duty of the police and other law enforcement agencies remains the protection of lives and livelihood of our people,” President Muhammadu Buhari said.

Authorities later ordered all personnel to report to the police headquarters in the capital, Abuja, for debriefing and psychological and medical examination. Meanwhile, the forming of a new Special Weapons and Tactics (SWAT) team was announced to replace SARS.

However, the announcements did not satisfy protesters, who viewed them as just another renaming exercise and pledged to stay on the streets until their demands are met. These include the immediate release of all arrested protesters; justice for all deceased victims of brutality; and appropriate compensation for their families.

Protesters also call for an independent body to oversee the investigation and persecution of all reports of police misconduct; psychological evaluation and retraining of all disbanded SARS officers before they can be redeployed,; and an increase in police salary so they are adequately compensated for protecting the lives and property of the citizens.

History of the SARS

SARS was a special police unit set up decades ago as Nigeria, Africa’s most populous country, battled rising levels of crime and kidnappings.

However, the group quickly became controversial for its links to extrajudicial killings, torture and other illegal activities. Amnesty International has reported cases of unlawful killings and police brutality allegedly carried out by the group for years.

In June 2020, it released a report suggesting SARS officers continued to commit human rights violations, including at least 82 cases of torture, ill-treatment and extrajudicial execution between January 2017 and May 2020.

Amnesty said the report “reveals a pattern of abuse of power by SARS officers and the consistent failure by the Nigerian authorities to bring perpetrators to justice. It highlights the deficiencies in Nigerian police accountability that contribute to, and exacerbate, these violations.”

In April last year, Kofi Bartels, a 34-year-old radio journalist in Nigeria’s Rivers State, was filming three police officers from the Special Anti-Robbery Squad (SARS) beating another man when they and three of their colleagues turned their attention to him.

In a series of tweets, he described being beaten and arrested: “They took turns to slap, punch and kick me while I was struggling with a swollen knee. At least six officers, one at a time.”

It has been accused of harassing and physically abusing thousands of civilians since it was created in 1992. The #EndSARS protests resulted in the Nigerian government announcing earlier this month that it would disband the unit. But this is the fourth time in as many years that the government has promised to disband or reform the unit that citizens say has terrorised them for decades.

Amnesty International said at least 12 people were killed by the Nigerian army and police in a crackdown on protesters on Tuesday that drew international condemnation. Overall, 56 people have died across the country since demonstrations against police abuse and bad governance began on October 8.

Nigeria’s president, Muhammadu Buhari, has been criticised for his muted response after security forces opened fire on people protesting against police brutality in Lagos on Tuesday, drawing international condemnation.

Gunfire rang out in the affluent Ikoyi neighbourhood of Nigeria’s commercial capital Lagos on Thursday with witnesses saying assailants attacked a detention facility in the area that is home to government offices.

Smoke was also seen rising from the direction of Ikoyi correctional facility, and trucks carrying police were seen heading towards the prison. The wreckage of a dozen cars smouldered in the upscale Ikoyi neighbourhood and two official buildings were ablaze.

“The Ikoyi prison is mainly surrounded by government buildings and security establishments. Residents said they saw hoodlums armed with clubs and then gunfire was heard and the fires and smoke were later seen,” said Al Jazeera’s Ahmed Idris, reporting from the capital Abuja.

Other accounts suggested the gunfire resulted from an attempted jailbreak by prisoners. It was unclear if any inmates escaped.

Soldiers patrolled the streets of the city on Thursday a day after several buildings  including police stations, a TV channel and the port were torched.

In a statement, the Chairperson of the African Union (AU) Commission, Moussa Faki Mahamat, condemned the violence of 20 October 2020 during protests in Lagos, Nigeria.  Amnesty International said at least 12 people were killed, by the military, in the violence. There were also several injuries.