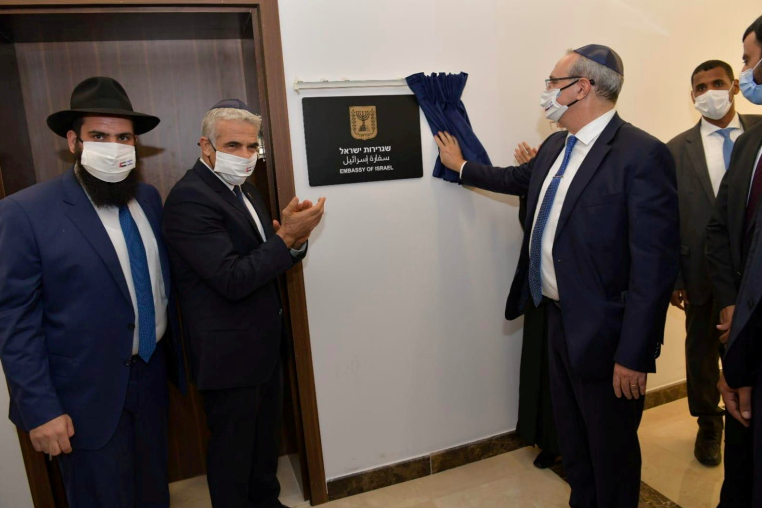 Israel’s new foreign minister inaugurated its embassy in the United Arab Emirates on Tuesday and offered an olive branch to other former adversaries, saying: “We’re here to stay.”

During his two-day visit, the first to the Gulf power by an Israeli cabinet minister since the countries established ties last year, Yair Lapid was also due to inaugurate a consulate in Dubai and sign a bilateral agreement on economic cooperation.

The trip is an opportunity for the two-week-old Israeli government of Naftali Bennett, a nationalist who heads an improbable cross-partisan coalition, to make diplomatic inroads.

Lapid was set to meet the UAE’s foreign minister in Abu Dhabi, with talks likely to focus in part on Iran, which both countries view as a regional threat.

The administration of former United States President Donald Trump brokered the so-called “Abraham Accords” agreement that established ties between the UAE and Israel. It was hailed at the time by both Trump and Israeli Prime Minister Benjamin Netanyahu as among their greatest achievements.

While Lapid was in Abu Dhabi, US Secretary of State Antony Blinken welcomed the opening of the Israeli embassy there.

In a statement, Blinken said the embassy opening and Lapid’s visit to the Gulf country were “significant for Israel, the UAE, and the broader region”, The Times of Israel reported.

“Israel wants peace with its neighbours – with all its neighbours. We aren’t going anywhere. The Middle East is our home,” Lapid said during the ribbon-cutting ceremony at the Abu Dhabi high-rise office serving as a temporary embassy.

“We’re here to stay. We call on all the countries of the region to recognise that,” he said, according to a transcript.

Tuesday’s agreement will be the 12th between Israel and the UAE, Lior Haiat, spokesman for Israel’s Foreign Ministry, said. Lapid is also set to visit the site of Expo 2020 Dubai, a world fair opening in October where Israel has built a pavilion.

Lapid’s plane transited through Saudi airspace. Riyadh, although not having normalised relations with Israel, last year opened its skies to Israel-UAE flights.

The UAE formally opened its embassy in Israel, temporarily located in the Tel Aviv stock exchange, to little fanfare this month.

Israel and the UAE strengthening ties

Regardless of the presence of a new government in Israel, the trajectory of Israel-UAE relations is heading towards a strong alliance that has its anchors in several sectors.

Signifying this diverse cooperation, Israel signed a first-of-its-kind agreement with the United Arab Emirates on June 1st to launch a joint Israeli-Emirati Water Research Institute in an effort to bring clean water to the UAE and other regions.

The institute is a product of a strategic commercial collaboration between Watergen, an Israeli water technology company, and Baynunah, a sister company of Al Dahra Group, an Abu Dhabi-based agriculture group specializing in food security. The joint institute will also be working closely with the Moshe Mirilashvili Institute for Applied Water Studies at Tel Aviv University (TAU).

The Watergen-Al Dahra collaboration will take place over the course of five years. It will be developed and adjusted to accommodate the UAE desert environment.

In addition to this, we can see development in media ties, as Israel’s i24news, whose general content is broadcast in Arabic, English and French, aims to carry its content in the UAE through two Emirati telecom operators, Etisalat and DU.

“The establishment of our office in Dubai Media City gives us a strategic platform to expand our coverage of the Middle East right from the heart of the region’s media industry hub,” Melloul said.

The establishment of the Dubai office for i24news will give Israel a chance to spread its messages to Arab audiences, says Alhelou. “It will have a chance to defend itself against the Palestinian resistance,” the analyst views.

With this new media office, Israel will also have an opportunity to build on UAE-Israel normalisation and “influence other Arab countries” to come to terms with Tel Aviv, he adds.

On October 1, after a year-long coronavirus-induced delay, the international EXPO will be launched in Dubai, with Israeli participation, providing Israel with an impressive stage to display its wares. Last year’s event was planned as the de facto launch of the Israel-UAE normalization agreement. This year, with the right approach by the new government, it could turn into a celebration of the new relationship Israel has, and should still further develop in the Middle East.

Why is the UAE important to the Bennett government?

As mentioned earlier the UAE is the first country to which Israel’s new government has sent its foreign minister, displaying its significance in Israel’s eyes in geopolitical terms.

The UAE’s increasing geopolitical significance in recent years has made it a point of interest for both the US and Israel, who increasingly view the former as the most valuable strategic partner in the Middle East.

One of the prizes of normalisation for Abu Dhabi is its new ability to acquire F-35 fighter jets from the United States. Following the Abraham Accords, Israel removed its objections to the arms purchase.

While defence deals between the two countries can now be announced in public, it was an open secret that the UAE and Israel had an ongoing relationship based on the sector going back decades. But Sachs doesn’t see the needle moving significantly.

“Perhaps there will be opportunities for medium-sized and small companies who couldn’t enter the market before, but I don’t think the influence of the Abraham Accords on defence industries is so dramatic,” he said.

Security will still likely be on the top of Lapid’s agenda.

His visit to the UAE this week coincides with ongoing efforts by the administration of US President Joe Biden to revive the Joint Comprehensive Plan of Action (JCPOA), the 2015 Iran nuclear deal with world powers.

After Netanyahu’s courtship of former US President Donald Trump, Lapid said he is eager to repair strained ties between his country and the Democratic party in the US.

On Sunday he met with US Secretary of State Antony Blinken in Rome and promised any Israeli objections to a new Iran agreement would be made privately to Washington.

Both Israel and the UAE opposed the JCPOA at its signing and supported the Trump administration’s unilateral withdrawal from the pact in 2018. That alignment played a critical role in pushing the Abraham Accords forward.

While it might not be in public view, Yanarocak said Israel will look to work with its new Gulf partner to jointly lobby the US over concerns about Iran’s missile programme and support for regional proxies.

“Israel needs to consolidate the Abraham Accords camp to pressure and leverage the US government over the terms of a possible agreement with Iran,” he said.