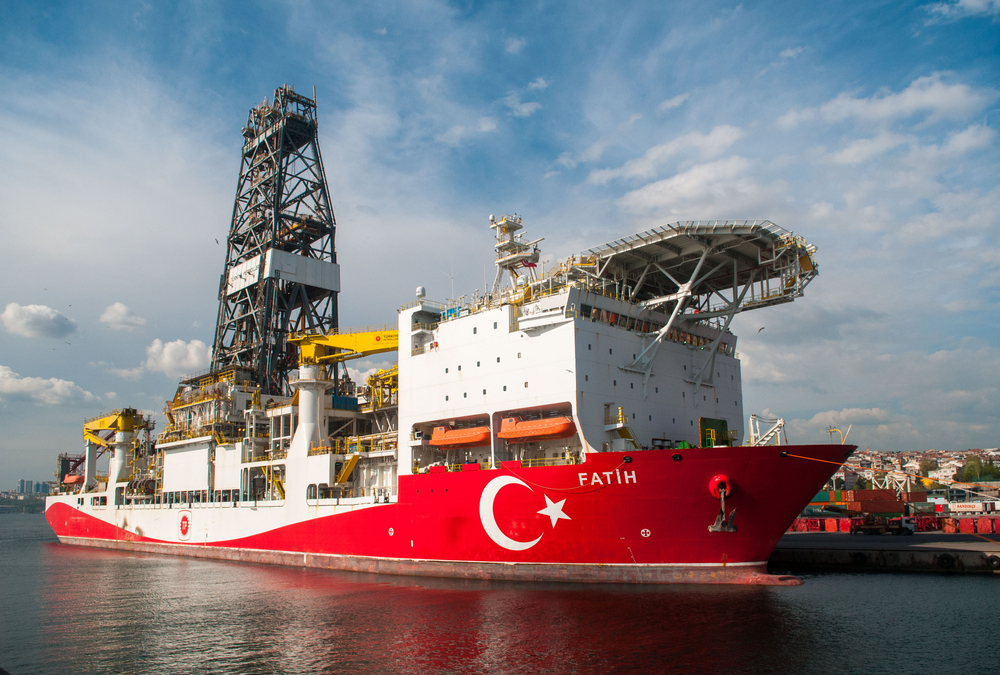 Turkey has for a long time been planning drilling operations in the Mediterranean, with an aim to diversify its energy sources, and increase Maritime security. President Recip Tayyip Erdogan has consistently aimed for freedom in executing his foreign policy agenda, of which energy concerns are pivotal.

Turkey’s domestic energy supply is far outstripped by demand, making resource portfolio diversity key to the country’s energy security. Turkey overwhelmingly relies on energy imports to power its needs approximately 75 percent of its total. Predominantly reliant on fossil fuels, natural gas provided for 28 percent of annual demand in 2018, much of which goes towards heating and electricity production. For the past several years, around one-half of this gas has been imported from Russia, leaving Turkey politically and economically vulnerable. As a consequence, Erdogan feels justifiably exposed when Turkey’s agenda clashes with that of Russia. Just now, Erdogan and Putin’s marriage of convenience is being stress-tested in Syria and Libya, where conflicting Mediterranean interests have come to the fore at last.

As the possibility of a rift between Turkey and Russia is always present, so too is Erdogan’s awareness of this, and his intention to increase Turkey’s independence. Turkey’s aim to reposition itself geopolitically includes reshaping Turkey as a natural gas hub, an enduring objective.  Erdogan’s “Vision 2023” goal is to lower Turkey’s energy intensity by at least 20 percent

President Recep Tayyip Erdogan chaired a National Security Council meeting earlier this year at which civilian and military leaders discussed “activities of some countries against Turkey’s interests in the Mediterranean,” according to a statement. “Turkey will continue to defend its rights and interests in the land, air and sea without any concession,” the council said. The eastern Mediterranean has become an energy hot spot with big finds for EU member Cyprus, Israel and Egypt in recent years, and Turkey’s push to secure a share of the resources in those waters has exacerbated strains in an already tumultuous region.

“Greece, Egypt and some other countries have tried to exclude us” from energy sharing in the Mediterranean, Turkey’s Foreign Minister Mevlut Cavusoglu told TV24 television in an interview on Wednesday. “Any deal that excludes Turkey can’t survive and is not valid, we won’t allow any fait accompli.”

Turkey has now gone ahead and started its planned drilling operations in the Eastern Mediterranean, which has drawn negative reactions from Europe, which will be discussed below.

Turkish Foreign Minister Mevlut Cavusoglu said last week that Turkey would start seismic research and drilling operations in contested waters that are covered by an agreement between Ankara and Libya’s internationally recognised government.

After reports on Teusday that Turkish naval ships have moved to patrol the area, the Greek military was placed on alarm. Many Greek islands in the Aegean and the Eastern Mediterranean are within sight of the Turkish coast, so issues of territorial waters are complex and the two countries have come to the brink of war in the past.

The Greek Foreign Ministry issued a statement Tuesday, calling on Ankara to “immediately cease the illegal activities” that it said violated the nation’s sovereign rights. On Wednesday, the Turkish Foreign Ministry rejected the assertions, saying the Oruc Reis survey ship was operating within Turkey’s continental shelf. “Greece bases this claim on the presence of remote islands far from its own mainland, most notably Kastellorizo,” Turkish Foreign Ministry Spokesperson Hami Aksoy said in a statement Wednesday. “This maximalist continental shelf claim of Greece is contrary to international law, jurisprudence and court decisions.”

The already simmering tensions between Turkey and France were also increased as a result of the latest developments. French President Emmanuel Macron has denounced what he called Turkey’s “violation” of the sovereignty of Greece and Cyprus, as tensions mount between Athens and Ankara. Macron made the remarks on Thursday, referring to Turkey’s plans for energy exploration in the Eastern Mediterranean. “I want once again to reiterate France’s full solidarity with Cyprus and also with Greece in the face of Turkey’s violation of their sovereignty,” he said before talks with his Cypriot counterpart Nicos Anastasiades at the Elysee Palace in Paris. “It is not acceptable for the maritime space of a member state of our Union to be violated or threatened. Those who contribute must be sanctioned.” Turkey’s response will be discussed in the next section.

Even the US has condemned Turkey’s drilling operations, as the Trump administration has called on Turkey to stop oil and gas drilling off the coast of Cyprus, a US Department of State spokesperson told Sputnik. “The United States is aware that Turkey has issued a NAVTEX (Navigational telex) for research in disputed waters in the Eastern Mediterranean,” the spokesperson said on Tuesday. In his statement, the spokesperson added that the US urged Turkish authorities to halt any plans for operations and to avoid steps that raise tensions in the region.

Turkey’s reaction and its geopolitical implications

Turkey has reacted sternly and adamantly to recent criticism of its commencing drilling operations in the Eastern Mediterranean. Turkey on Thursday rejected accusations by French President Emmanuel Macron that Ankara was violating the sovereignty of European Union countries in the Eastern Mediterranean. Turkey cannot be threatened through sanctions, a Turkish Foreign Ministry spokesman said Thursday as he slammed a statement by Macron. “Statements of President Macron have no value for our country,” Hami Aksoy said, adding that threats “will have no result.” He demanded France stop magnifying itself and follow discreet and rational policies and said it should stop supporting putschists in Libya, terrorists in Syria and those who act with the understanding of “I am the only owner of this place” in the Eastern Mediterranean.

Furthermore, Turkey has proven through video footage and radar images that its ships have not engaged in any illegal activity in the Mediterranean Sea, Defense Minister Hulusi Akar said Thursday amid allegations that its navy had harassed a French warship. Speaking at a ceremony in Kayseri province, Akar said Turkey shared all of the evidence with NATO’s military and civil authorities.

Turkey has also rejected Greece’s “maximalist” objectives in the Eastern Mediterranean, which lack a legal basis and disregards logic, Presidential Spokesperson Ibrahim Kalın said Thursday. Kalın highlighted that Turkey opposes the rhetoric of threats and favors an equal distribution of resources. The Greek side’s “maximalist” position claims that the island of Kastellorizo (Meis in Turkish)-only 2 kilometers from the Turkish shore, but about 580 km away from the Greek mainland-“should have a 40,000 square km continental shelf area, which is almost like half of Turkey’s Gulf of Antalya,” Kalın told an online policy briefing by the European Policy Centre in cooperation with the Foreign Economic Relations Board of Turkey (DEIK).

Turkey has therefore rejected Greek and European calls and Turkey will carry out the surveys until Aug. 2, while Greece’s armed forces are on standby monitoring for Turkish movements.

This move and Turkey’s insistence has been another sign of Turkey showing its geopolitical independence, as an indepent power, that neither the EU nor the US can control, and also the possibility of gaining major gas resources in the Mediterranean that would definitely reduce its gas import reliance on Russia, which does still hold geopolitically restrained in that respect.