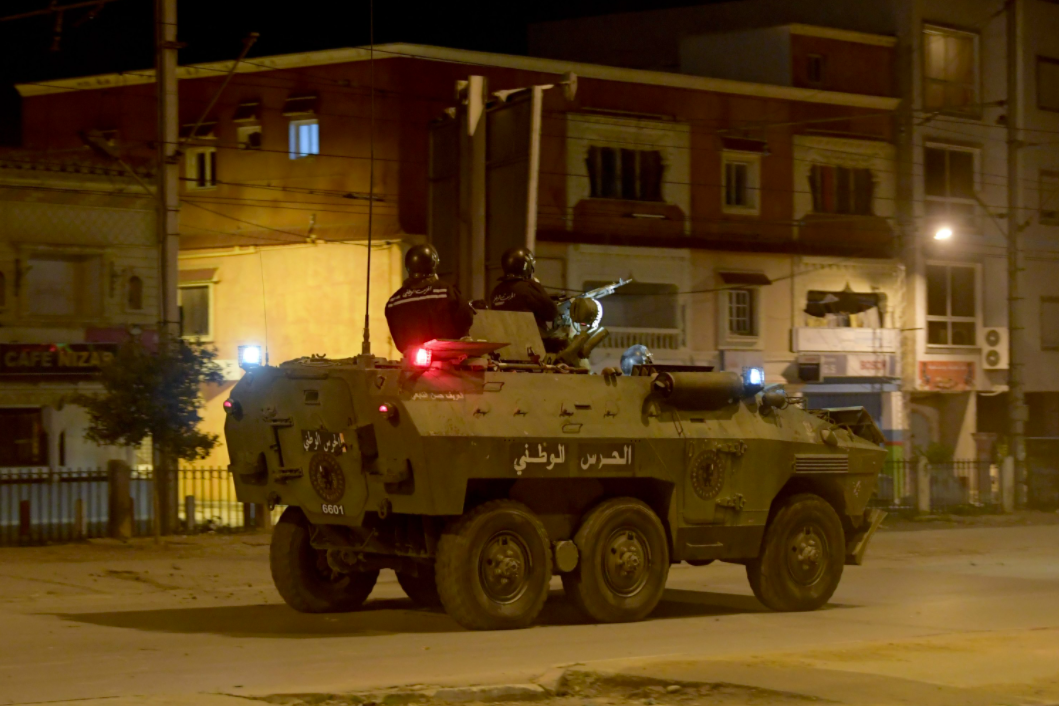 More than 600 people have been arrested after a third consecutive night of riots in several Tunisian cities and troops have been deployed in some regions, officials said.

Interior ministry spokesman Khaled Hayouni said on Sunday a total of 632 people were arrested, notably “groups of people between the ages of 15, 20 and 25 who burned tires and bins in order to block movements by the security forces”.

The defence ministry said the army had been deployed in several cities.

Protesters blocked roads by burning tyres and threw stones and other objects at police and businesses, according to the interior ministry, which said the situation was now “calm” across the country.

The protests took place as Tunisia marks the 10th anniversary of the revolution that toppled the late President Zine El Abidine Ben Ali and sparked the Arab Spring uprisings.

The took place in several areas of the capital, Tunis, and the seaside city of Sousse, among others. Interior Ministry spokesman Khaled Hayouni told the AFP news agency that dozens of young people, mostly aged between 14 and 17, were held after they took to the streets. He accused them of intending to loot and vandalize shopfronts and cars overnight.

Tunisia’s tourism revenue plunged by 65% in 2020 compared to 2019, to around $746 million, official figures showed on Thursday, as the impact of the COVID-19 pandemic dealt a severe blow to the country’s economy.

In 2020, the number of visitors fell by 78%, as western tourists deserted Tunisia’s hotels and resorts, a government official told Reuters. Tunisia had received a record 9.5 million visitors in 2019. The contraction of Tunisia’s economy is expected to be at least 7% in 2020 as a result of the loss of revenue from tourism, which accounts for about 8% of GDP and is a major source of foreign currency.

Central bank data showed that tourism revenues fell to 2 billion Tunisian dinars ($746 million), compared to 5.6 billion dinars the previous year. Travel restrictions and the spread of the novel coronavirus around the world led most hotels in Tunisia to close and tens of thousands in the tourism sector lost their jobs, which prompted the government to announce facilities in loans to hotel owners.

A decade after the Arab Spring, Tunisia is failing to meet the goals of dignity and employment that drove the 2010-2011 popular protests, as deteriorating socioeconomic conditions coupled with political instability cripple the country’s revolutionary course.  Back in 2011, the slogan “work, freedom and dignity” best summarised the core demands of the revolutionaries who rose up in the town of Sidi Bouzid sparking the Tunisian uprising and what became the Arab Spring.

Although the revolution ousted former autocrat Zine El Abidine Ben Ali and forced him to flee on 14 January 2011, socioeconomic marginalisation rather than political change was the original driver that pushed people to the streets mainly in the interior regions.

The North African state, often praised as the Arab Spring’s only democracy, has made major gains in the sphere of rights and freedoms, but issues such as employment and living conditions have either stagnated or worsened.

Ten years on, Tunisia is grappling with a persistent economic recession and ongoing political wrangling while citizens have seen few changes in their lives, and the Covid-19 pandemic is compounding the country’s crisis.

Meanwhile, there appears to be political change. Tunisia’s Prime Minister Hichem Mechichi announced on Saturday a major cabinet reshuffle affecting 12 ministries, in the wake of high-profile sackings.
“The aim of this reshuffle is to achieve greater efficiency in the work of the government,” Mechichi said at a press conference in the capital Tunis.

The new line-up, which does not include any women, must be approved by parliament.
A few hours before the announcement, Mechichi had met with President Kais Saied, who insisted the “integrity” of proposed ministers should “raise no doubt,” according to a statement from the presidency.

“There is no place (in the government) for people who are subject to legal proceedings” or to “doubts about their background or their behavior that could undermine the state and the credibility of its institutions and the legitimacy of its decisions,” Saied said.
One of the officials to be replaced is former environment minister Mustapha Aroui, who was sacked and arrested in December in a scandal over hundreds of containers of household waste shipped from Italy.

Hedi Khairi was named health minister following criticism over the government’s handling of the coronavirus pandemic, with the official date for the start of vaccinations in Tunisia still unknown.

Disputes have also shaken the ranks of coalition partners supporting the government, with the Karama party refusing to vote on the reshuffle and threatening to leave the coalition.

The 2019 election delivered a bitterly fragmented parliament unable to produce a stable government, with parties bickering over cabinet seats and putting off big decisions.

Despite this, the latest reshuffle is unlikely to tame the protests. For that, significant economic improvement is needed.