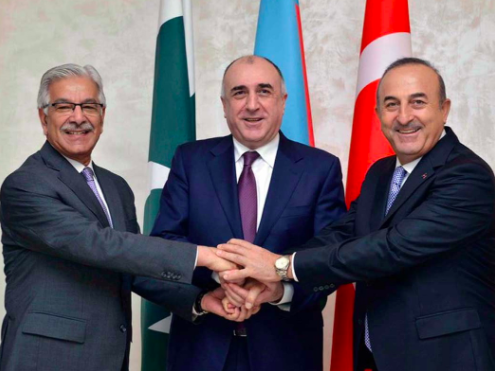 On Azerbaijan’s call for support in reconstruction and development of liberated territories, the Prime Minister assured him of all possible assistance from Pakistan.

Speaking to the Azerbaijan FM, President Alvi underlined the need to enhance cultural and commercial ties between the two countries. He reaffirmed Pakistan’s support for territorial integrity of Azerbaijan. The President congratulated the government and people of Azerbaijan over the liberation of Nagorno Karabakh. President Alvi said Pakistan highly valued its relations with Azerbaijan which are based on common faith and cultural linkages.

Pakistan’s pledge to rebuild Karabakh is clearly a signal of the plan to significantly enhance geopolitical and economic ties with Azerbaijan. Pakistan and Azerbaijan on Friday agreed to enhanced bilateral relations, including cooperation in the political, economic, energy, defense, education, and culture sectors, an official said.

The agreement arrived after the second round of Pakistan-Azerbaijan bilateral political consultations conducted through a virtual link.

The Pakistani side was led by Foreign Secretary Sohail Mahmood while the Azerbaijan delegation was headed by the country’s’ Deputy Foreign Minister Ramiz Hasanov.

Both sides termed the existing bilateral political relations exemplary and affirmed the resolve to take the overall relationship to a new level, according to a statement, issued by Pakistan’s Foreign Ministry.

The Air Chief praised the professionalism of Azerbaijan Air Force and assured his counterpart of PAF’s full support; especially in the domain of training, said a PAF press release received here.

Pakistan forming a regional alliance with Turkey and Azerbaijan

Pakistan’s rapidly growing relations with Turkey have also contributed to the former’s developing ties with close Turkish ally Azerbaijan. Following Azerbaijan’s military victory over Armenia in Karabakh, to which both Turkey and Pakistan contributed, militarily and morally, the 3 powers are looking to form a regional alliance that could have major positive economic consequences, while placing a geopolitical stamp on the Middle East and Asia as a whole. They have specifically focused on Islam on their common bond.

Displaying this, top diplomats of Turkey, Pakistan and Azerbaijan have agreed to take concrete steps to further deepen their bilateral and trilateral ties at the three-way meeting held in Islamabad, vowing support to each other in disputes concerning Nagorno-Karabakh, Cyprus and Jammu and Kashmir.

The ministers issued the “Islamabad Declaration” following their meeting and held a joint press conference. They agreed to enhance their joint efforts in combating particularly Islamophobia, discrimination and persecution of Muslim minorities at the regional and international fora and renewed their resolve to strengthen cooperation in peace and security in line with various international and regional instruments to combat all forms and manifestations of terrorism, transnational organized crime, trafficking of drugs, narcotics, human trafficking, money laundering, crimes against cultural and historical heritage and cybercrimes,” according to the declaration.

“[The ministers] expressed deep concern over the unilateral actions of Aug. 5, 2019, continuing human rights violations in Jammu and Kashmir and over the efforts to change its demographic structure, and reiterated their principled position for a peaceful settlement of the Jammu and Kashmir dispute in accordance with the relevant U.N. Security Council Resolutions,” it said.

They have also expressed their support to a just, sustainable, realistic, and mutually acceptable settlement of the Cyprus issue, as well as the issues in the Aegean and the eastern Mediterranean on the basis of international law. On Nagorno-Karabakh, the ministers “reiterated their support for putting an end to the Armenia-Azerbaijan conflict and normalization of relations on the basis of sovereignty and territorial integrity and internationally recognized borders of Azerbaijan in accordance with the relevant U.N. Security Council resolutions.”

At the press conference, Çavuşoğlu said that they have agreed to take important steps to improve security, stability and prosperity between the three brotherly countries, especially in the fields of transportation and energy.