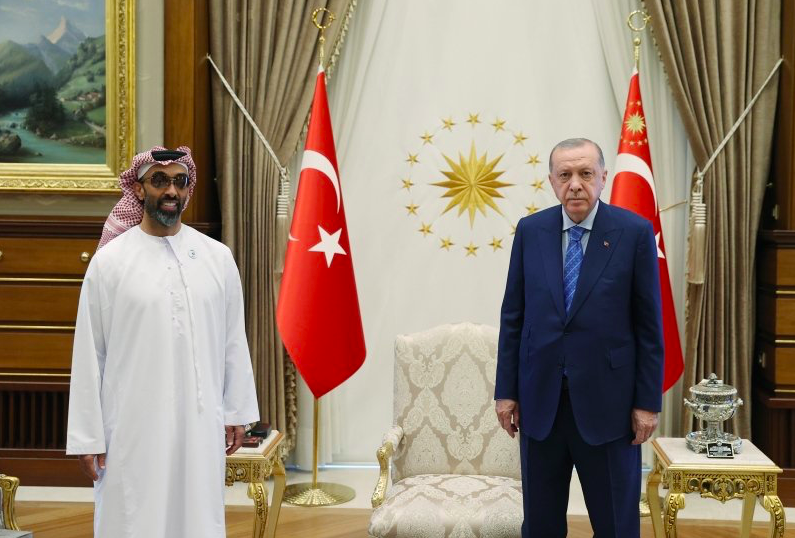 Turkish President Tayyip Erdogan held a rare meeting with a senior official from the United Arab Emirates on Wednesday, after years of tension between the two countries and rivalry in regional disputes.

Turkey and the UAE have supported opposing sides in regional disputes, including the conflict in Libya and the blockade of Qatar by several Arab states.

Fluctuations in bilateral relations can happen and are normal, said President Recep Tayyip Erdoğan in a televised interview late Wednesday, adding that the United Arab Emirates (UAE) may make “serious investments” in Turkey if negotiations between the countries go well.

The Communications Directorate also said in a statement that bilateral and regional developments were discussed during Erdoğan’s meeting with Al Nahyan.

In June, a report said that UAE seeks to restore ties with Turkey and other regional countries.

Erdoğan had reiterated that Turkey hopes to maximize its cooperation with Egypt and Gulf nations “on a win-win basis,” at a time when Ankara intensified diplomacy to mend its fraught ties with Cairo and some Gulf Arab nations after years of tensions.

Relations between Turkey and the UAE hit an all-time low when Erdoğan said that Ankara could suspend diplomatic ties with the Abu Dhabi administration after the UAE-Israel deal.

The normalization of Gulf nations with Turkish ally Qatar has also facilitated this opening.

The two also discussed the UAE’s investments in Turkey, the statement added, adding that if the talks proceed well the United Arab Emirates would make “serious investments” in Turkey.

There have already been some significant moves that have led to increased Emarati investment in the Turkish market.

FENIX, a United Arab Emirates-based e-scooter company backed by Israeli venture capital funding, has acquired Turkish scooter company PALM for $5 million, it said on Monday, as the start-up expands across the Middle East into its fifth country.

With almost 10,000 e-scooters in 13 cities, FENIX has the largest fleet in the Middle East and North Africa.

Moving into Turkey, which has milder summers, will help to offset the impact on scooter hires of the Gulf’s scorching mid-year temperatures, Dhanoa said.

FENIX also operates in Bahrain, which similarly normalized with Israel in September, and in Qatar and Saudi Arabia – which do not have diplomatic relations with Israel.

Dubai, one of the UAE’s seven emirates, in March 2019 banned companies renting out e-scooters while it develops regulations, and Turkey in April enacted e-scooter regulation, which encouraged the PALM acquisition, Dhanoa said.

With the development in ties, this could be just the start of a large boost of Emarati investment in Turkey in the coming years, which would stimulate a reparation of ties.

Turkey has in recent years expanded its regional influence and strategic importance, in several cases at the cost of the UAE’s own interests. We can see this in the cases of Libya, where the UAE-backed Haftar forces were decisively defeated by the Turkey-backed GNA based in Tripoli for example. As Turkey gains a foothold in Syria, Libya, Somalia and Northern Iraq, it is becoming increasingly difficult for the UAE to continue its regional rivalry with the Eurasian power, it is therefore unsurprising that the Gulf country has opened up to normalizing ties, especially since the US is no longer a stable partner in the Middle East with Joe Biden’s pragmatic approach.

Turkey’s strategic importance could further be expanded through gaining a foothold in Afghanistan, which is currently in political turmoil, as the Taliban have taken control of the country from the US-backed Ghani government. The Taliban has, before and after its take-over expressed its openness to establish successful ties with Turkey, while Turkey’s plan for guarding the Kabul airport could still be fulfilled.

Turkey is in talks with all parties in Afghanistan, including the Taliban, and views positively the messages the Islamist militants have sent since taking control of the country, Foreign Minister Mevlut Cavusoglu said on Tuesday.

“We are making our plans in line with new realities in field, continuing negotiations accordingly,” Erdoğan said.

“We are open to cooperation. They have been very sensitive towards relations with Turkey and we hope their sensitivity will continue,” Erdoğan added.

Another incentive that has arisen in risen months for the UAE to repair ties with Turkey, is increased friction with Saudi Arabia, which puts at risk the strategic partnership between the two gulf nations.

The once closely coordinated and tightly knit Saudi-Emirati relationship is fraying. A cascade of policy divergences has emerged between Riyadh and Abu Dhabi over the past year, and more acutely over the past weeks. The long list of differences includes attitudes toward the war in Yemen, the pace of reconciliation with Qatar after a three-and-a-half-year rift, normalization with Israel and the Abraham Accords, managing ties with Turkey, OPEC production quotas, Iran strategy, and cross-border trade.

Now, it appears that the UAE could use a shift towards a new strategic partner in place of Saudi Arabia, or in order to ensure its foreign policy has assurances outside of its Saudi ties, and Turkey is the only candidate that could fulfill this role.