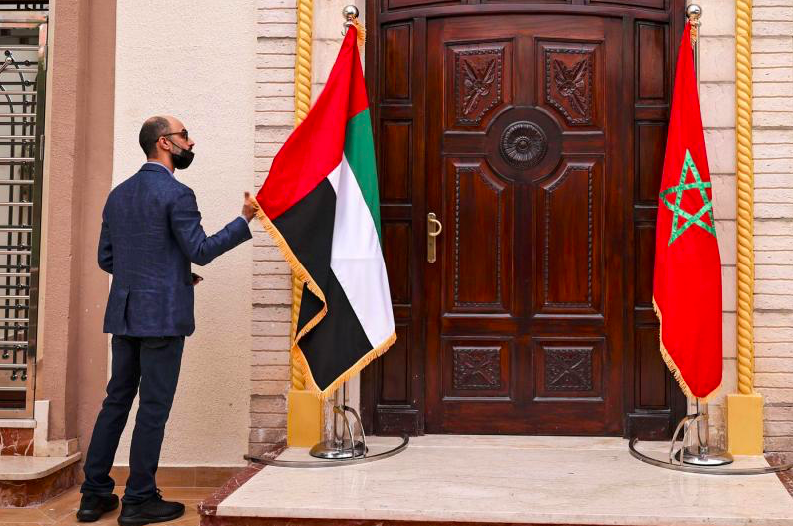 The Moroccan Sahara city of Laayoune is hosting the Morocco-United Arab Emirates Business Forum held under the theme ”A New Outlook, New Partnerships.”

The forum, held under the High Patronage of King Mohammed VI, aims to showcase the region’s potentialities and partnership and trade opportunities for Emirati economic operators and investors.

The opening of the Forum was marked by presentations that highlighted the excellence of relations between Morocco and the UAE and the multidimensional strategic partnership binding the two countries.

The UAE has opened a consulate general in Laayoune in November 2020, becoming the first Arab country to establish a diplomatic representation in the Moroccan southern provinces. Through this move, the Gulf country reiterated in a tangible way its support for Morocco’s sovereignty over the Sahara.

The opening of the Consulate gave a new impetus to political, economic, commercial, and cultural bilateral ties, and the organization of this forum reflects the strong determination of the UAE to contribute to the dynamics of the development of the region.

The United Arab Emirates (UAE) will continue to invest in the Moroccan economy, said Issa Al-Balushi, the Emirati consul in Morocco’s Laayoune.

Al-Balushi affirmed that his country wants to stay involved with the Moroccan economy through encouraging and participating in investments, stating that the total investments at the end of last year amounted to $20 billion.

The statements came as part of the Morocco-UAE Forum of Affairs, which started in Laayoune yesterday.

The forum signifies “the spirit of brotherhood between Morocco and the UAE,” according to Al-Balushi’s speech at the opening of the forum. He added that the Gulf state looks forward to building stronger and deeper relationships throughout Morocco, especially in the southern Sahara regions.

The consul stated that the UAE has been the top Arab investment partner with Morocco since 1976, as the Abu Dhabi Fund for Development has contributed more than $2 billion in more than 80 projects in Morocco.

Al-Balushi also renewed his country’s commitment to continue working with Morocco on an economic front and to include them in significant events held in the Emirates, such as the World Expo in Dubai.

The Emirati official stressed the importance of the Sahara region to future UAE involvement in the country, mentioning that the southern regions of Morocco are about to enter a new economic era under the leadership of King Mohammed VI.

The forum which started on Monday, July 12, aims to explore more avenues for economic partnerships between the two countries and to strengthen the bilateral relationships between them.

The role of Israel

Among the main factors driving this acceleration in the UAE’s economic interests in Morocco is Morocco’s recent normalization of ties with Israel. The UAE, which had earlier normalized ties with Israel, now places great importance on this partnership, and views it as an outlook for regional peace and stability in the region. Thus, any state that would follow its example and normalize ties with Israel, would rise significantly in the UAE’s index for stable and strategic hubs for investment. Morocco has entered this fold by normalizing ties with Israel soon afterwards.

Signifying the UAE’s thriving relationship with Israel, the UAE has inaugurated its embassy in Israel, less than a year after the two countries announced they would establish formal diplomatic relations. The embassy is situated in the Tel Aviv Stock Exchange building and its opening on Wednesday followed the inauguration of Israel’s embassy in the UAE last month.

The venue in the heart of Israel’s financial district highlighted the central role economic cooperation has played since the UAE became only the third majority-Arab country to recognise Israel.

At the ceremony, attended by new Israeli President Isaac Herzog, Emirati Ambassador Mohamed al-Khaja called the embassy opening “an important milestone in the growing relationship between our two countries”.

“The UAE and Israel are both innovative nations, we can harness this creativity to work towards a more prosperous and sustainable future for our countries and our region,” he said.

Herzog called for the “historic agreement” with the UAE to be “extended to other nations seeking peace with Israel”.

Israel and the UAE have sought to emphasise the economic dividend offered by normalisation, which is now being reflected in the latter’s economic ties with Morocco.

Meanwhile, the Israeli Foreign Ministry is in talks with Morocco to arrange an official visit by Foreign Minister Yair Lapid to the Arab nation, diplomatic sources told the Times of Israel Tuesday.