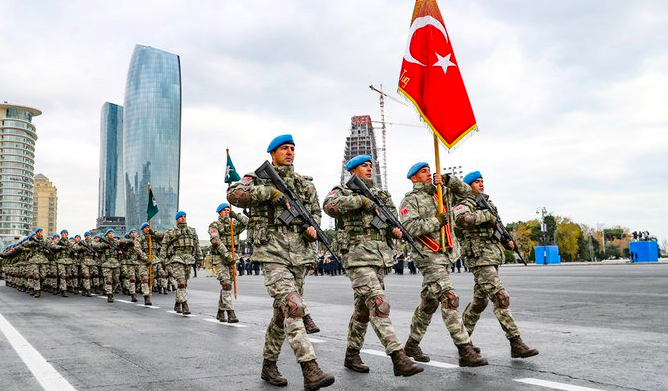 Turkey and Iran have already been having their interests aligning for the past several years. The nations’ opposition to American and Israeli dominance in the Middle East have been a major common ground. Furthermore, Turkey’s increasing cooperation with Russia has increased the possibilities of getting closer to Russian ally Iran. Turkey faces the UAE in Libya while Iran faces the UAE in Yemen through its Houthi proxy.

Since last year, we have seen the increasing possibility of a new alliance forming between Iran, Turkey and Russia, as all 3 have a common goal of reducing the US’s sphere of influence, as well as the more visible aim of containing the Kurds in Syria.

Two months ago, a video conference meeting between top Turkish and Iranian officials was held in a sign of willingness from both sides to increase cooperation. The meeting of Iran-Turkey High-Level Cooperation Council was held with the participation of President Recep Tayyip Erdoğan and his Iranian counterpart Hasan Rouhani via videoconference.

“Unfortunately, we had to hold this meeting through video conferencing due to the pandemic. Despite this, it is an important message that we have shown the will to hold our meeting,” Erdoğan said.

Dialogue between Turkey and Iran has a decisive role in solving many local problems, President Recep Tayyip Erdoğan said, speaking ahead of the regular high-level cooperation meeting between the two neighboring countries. “Turkey and Iran dialogue has a decisive role in the solution of many regional problems. I believe that our cooperation will return to its previous levels as the pandemic conditions alleviate,” Erdoğan said at the beginning of the meeting.

What has led to a sudden rise in tensions

In recent days, tensions have risen rapidly between Turkey and Iran. What sparked this rise was the controversial poem that was recited by President Recep Tayyip Erdogan during his visit to Azerbaijan.

On Thursday, Erdogan paid a visit to staunch ally Azerbaijan for a military parade marking Baku’s victory over Armenia after six weeks of fighting over the disputed Nagorno-Karabakh region. During his visit, Erdogan recited a poem that Tehran said could fan separatism among Iran’s Azeri minority.

“They didn’t tell Erdogan that the poem he ill-recited in Baku refers to the forcible separation of areas north of Aras from the Iranian motherland,” Iranian Foreign Minister Mohammad Javad Zarif tweeted.

In the meantime, Iran’s Foreign Ministry said on its website on Friday: “The Turkish ambassador was informed that the era of territorial claims and expansionist empires is over.”

Iranian lawmaker Ali Asgar Hani threatened the Turkish president by posting a picture of Saddam Hussein hanging on Twitter with the caption: “Mr Erdogan, this was the fate of the last person who coveted Iranian land.” The image was later deleted.

Turkey on Saturday rebuked Tehran for “offensive language” aimed at President Recep Tayyip Erdogan in connection with a controversial poem that might suggest Iran’s northwestern provinces belong to Azerbaijan. It must be said that althoughIran and Turkey have increased economic cooperation over the past decade, they remain rivals in several parts of the Middle East and Central Asia.

Iranian authorities summoned Turkey’s ambassador to Tehran to complain about Erdogan’s “interventionist and unacceptable remarks.” In return, Turkey summoned Iran’s ambassador to Ankara over the “baseless” claims. Turkey doubled down on Saturday, with a statement by presidential communications director Fahrettin Altun that said: “We condemn the use of offensive language toward our president and our country over the recitation of a poem, whose meaning has been deliberately taken out of context.” Altun said the poem “passionately reflects the emotional experience of an aggrieved people due to Armenia’s occupation of Azerbaijani lands.”

Fakhrizadeh killing and other factors have made Tehran tense

This rise in tensions can be explained by an increasing sense of frustration in Tehran due to the detrimental events in recent weeks.

Israel was blamed for the attack, as Iran’s English-language Press TV reported on Monday that the weapon used in the killing of prominent Iranian nuclear scientist Mohsen Fakhrizadeh last week was made in Israel, the Islamic Republic’s longtime enemy. Iranian Foreign Minister Mohammad Javad Zarif called on the international community “to end their shameful double standards” and “condemn this act of state terror.” He added that the attack showed “serious indications of Israeli role.” Maj. Gen. Hossein Dehghan, Khamenei’s military adviser, tweeted that “Zionists” are seeking to create “all-out war” and vowed to “descend like lightning” on Fakhrizadeh’s killers.

Howver, Iran have failed to respond to Israel’s direct attack on their nuclear program, most probably because Israel have taken the necessary measures in preparation for a reaction. This has certainly increased frustrations within the Iranian government, as they promised revenge to their people.

Another source of frustration that is more directly linked to Turkey, is Turkey and Azerbaijan’s success against Armenia and specifically Turkey ‘s increased influence in Azerbaijan as a result, an opportunity Iran could have taken but did not, and as a result Turkey’s sphere of influence has drastically increased, and is knocking on Iran’s door. Iran could very well feel threatened by this geopolitical expansion.

Furthermore, Iran fears an Azeri awakening within Iran as a result of Azerbaijan’s sweeping victory. There is a sizeable Azeri population in Iran, and many have supported Azerbaijan’s territorial war with Armenia.

Another factor that could have contributed to Iran’s hostility towards Ankara could be Turkey’s recent reapproachment with Saudi Arabia, who is Iran’s main geopolitical rival in the Middle East along with Israel.

Hence, Erdogan’s poem, which touched this sensitive issue and gave even more confidence to Azeris wanting to reunite Iranian Azeri lands with Azerbaijan, simply sparked a blast from a fire that was already simmering, and Tehran’s strong reaction is therefore expected.