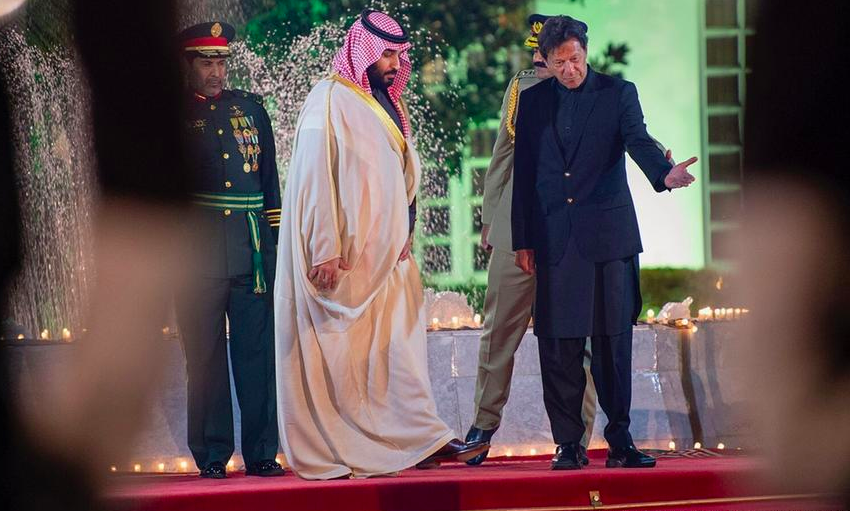 In meetings with the Saudi leadership, Khan will cover all areas of bilateral cooperation including economics, trade, investment, environment, energy, job opportunities for the Pakistani workforce, and the welfare of the Pakistani diaspora in the kingdom, the foreign office said.

“The Prime Minister will be accompanied by a high-level delegation, including the Foreign Minister and other members of the Cabinet,” the foreign office said in a statement.

During Khan’s visit, “the two sides will also exchange views on regional and international issues of mutual interest … A number of bilateral agreements/MoUs are expected to be signed during the visit.”

“Pakistan and Saudi Arabia have long-standing and historic fraternal relations, rooted deep in common faith, shared history and mutual support. The relationship is marked by close cooperation in all fields and mutual collaboration on regional and international issues, in particular those faced by the Muslim Ummah,” the foreign office said, adding:

“​Saudi Arabia is home to more than two million Pakistanis, contributing toward the progress and prosperity of both countries. Regular high-level bilateral visits continue to play a pivotal role in providing impetus to the fraternal ties and close cooperation between Pakistan and Saudi Arabia.”

Pakistani army chief General Qamar Javed Bajwa also visited Riyadh this week and on Wednesday discussed defense cooperation with the Saudi military chief of staff, Lt. Gen. Fayyad bin Hamed Al-Ruwaili.
During the meeting with Al-Ruwaili, Gen Bajwa “emphasized the need to further enhance military-to-military cooperation between the two-armed forces and said that Pakistan-KSA cooperation will have positive impact on peace and security in the region.”

Why is Pakistan keen on repairing ties?

Khan’s arrival in Riyadh on Friday after an invitation from Saudi Crown Prince Mohammed bin Salman holds much significance, analysts say. While Pakistan and Saudi Arabia have historically been close allies, their strong ties have suffered several setbacks.

“PM Khan’s visit to Saudi Arabia this week … is an attempt to reset relations to their former, very close level,” said Madiha Afzal, a fellow at the foreign policy programme of Brookings Institution.

The two countries remain important geostrategic partners and a stable relationship between Islamabad and Riyadh is expected to continue.

Kugelman said while a core goal for Islamabad will be to regain financial assistance from Riyadh: “The purpose of Khan’s visit, for both countries is simple. To be able to say that the partnership is back on level ground.”

Pakistan’s military and civilian leadership would like to take Riyadh’s view on Islamabad’s recent rapprochement with India. To an extent, Saudi Arabia and the UAE have played an important role in pushing for a back channel effort between New Delhi and Islamabad. Arguably, the UAE could not have played its much publicized mediatory role between India and Pakistan without the support and approval of Saudi Arabia, its patron and closet ally.

Pakistan also aims at the further strengthening of strategic cooperation, trade and investment. It also looks for cooperation against the COVID-19 pandemic, which has become a major challenge for the world including Muslim countries.

In recent years, the relationship between Pakistan and Saudi Arabia after decades of close economic, military and political cooperation suffered several fractures.

In August last year, Pakistan accused the Organisation of Islamic Cooperation (OIC), a bloc of 57 Muslim-majority countries led by Saudi Arabia – of inaction over New Delhi’s decision to strip Indian-administered Kashmir of its special status in 2019.

With Kashmir being a key policy issue for Pakistan, Khan threatened to hold a rival meeting that would bypass the OIC – a move perceived as a challenge to Saudi Arabia’s leadership role in the Muslim world.

Riyadh responded by withdrawing $1bn of a $3bn interest-free loan it extended to Pakistan in 2018, at a time when the South Asian nation was suffering dire economic conditions.

Although the issue was patched up within days, the diplomatic spat threatened to derail the Islamabad-Riyadh alliance.

Prior to that, tensions were high over Pakistan’s refusal to send its troops to fight in the Saudi-led coalition’s war against Iran-aligned Houthi rebels in Yemen in 2015.

While most observers expect discussions during the visit to focus on economic engagement – including work opportunities for Pakistani expatriates in Saudi Arabia and Saudi investment in Pakistan – Riyadh will also try to strengthen political ties with Pakistan.

“Given the Biden administration’s tough stance towards Saudi Arabia, Riyadh cannot afford to cut off any allies at the moment- be they big or small in significance,” said Arhama Siddiqa, a research fellow at the Institute of Strategic Studies Islamabad.

However, it must be noted that Saudi Arabia is the more reserved of the two in repairing ties to previous levels, and Saudi Arabia’s stance still remains to be determined in the coming weeks.