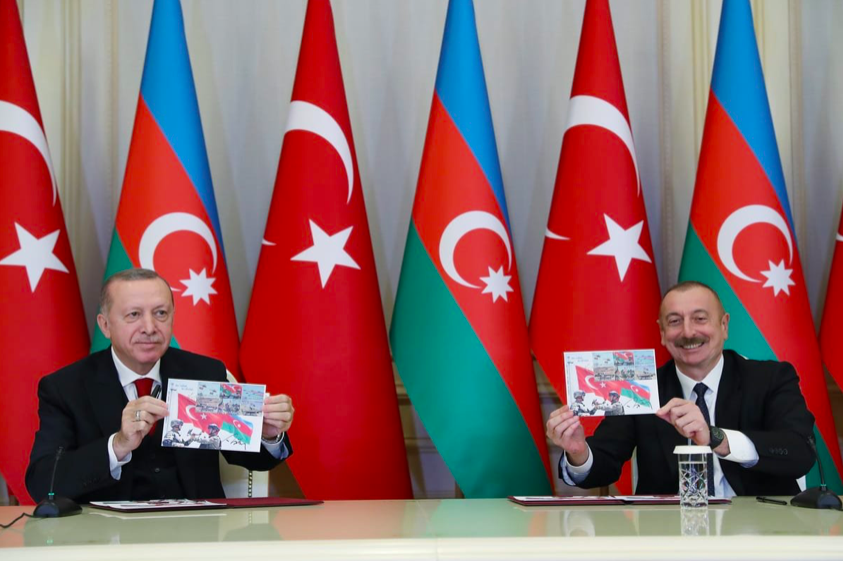 Iran and Azerbaijan on high tensions

Azerbaijan blasted Iran late Monday for its “smear campaign” and claims about the presence of terrorist groups in the Caspian country.

“Our advice to those who want to look for terrorists is to take a good look around themselves,” Leyla Abdullayeva, spokesperson for Azerbaijan’s Foreign Ministry, said in a statement.

Her remarks were a rebuttal to recent claims by Iranian leaders, including Foreign Minister Hossein Amir-Abdollahian, about the presence of terrorists in Azerbaijan.

“Unfortunately, the Iranian Foreign Ministry does not give up its smear campaign against Azerbaijan. We categorically reject such accusations,” said Abdullayeva.

Referring to last year’s Karabakh conflict, she stressed that Azerbaijan and its army of more than 100,000 soldiers did not need mercenaries to defeat Armenia.

“Surprisingly, no such accusations were made by Iran during the war, and no such concerns were raised until a new government came to power (in Iran) after the war,” Abdullayeva said, adding that an “anti-Azerbaijan campaign” will not benefit Iran in any manner.

She said Tehran has been resorting to “these baseless accusations” because Baku prevents the “illegal entry of Iranian trucks into Azerbaijan” and managed to liberate its occupied territories from Armenian control.

The proximate cause of the recent tension appears to have been the entry of Iranian fuel lorries into Armenian-controlled Nagorno-Karabakh — an act that Baku considers illegal. After this incident, Baku closed the part of Armenia’s key Goris-Kapan highway that passes through Azerbaijan, handed a diplomatic note to the Iranian ambassador, and detained the Iranian drivers whose fate, for now, remains unknown.

That has been accompanied by other irritants for Iran, including a series of military exercises involving Azerbaijan, Turkey and Pakistan, and a spike in anti-Iranian rhetoric from Azerbaijani officials.

Now, for the first time in decades, the Islamic Republic has conducted large-scale military exercises at its northern border with Azerbaijan.

State television on Friday showed footage of tanks, helicopters, artillery and soldiers being deployed in an unspecified area in northwestern Iran.

The army also said it was testing a locally manufactured long-range drone and other “achievements” for the first time.

It came after Iran’s Islamic Revolutionary Guard Corps deployed equipment and troops near the border area last month, shortly after Azerbaijan, Turkey and Pakistan conducted a military drill in Baku.

Iran has openly said it is concerned about Azerbaijan’s close military ties with its arch-foe Israel, whose provision of high-tech assault drones and other equipment to the Azeri army is thought to have helped tip the balance in its favour during its 44-day war with Armenian forces last year.

Welcoming Azerbaijan’s new envoy to Tehran on Thursday, Iranian Foreign Minister Hossein Amirabdollahian warned that Iran “does not tolerate the presence and activities of the Zionist regime against its national security and will do whatever necessary in this regard”.

During the military drill on Friday, Kioumars Heydari, the commander of the Iranian army’s ground forces, told state TV that Iran is also concerned about the presence of fighters that Azerbaijan brought in during last year’s fighting over the disputed region of Nagorno-Karabakh.

“The Islamic Republic of Iran has never started any invasion. But when there was war between Armenia and Azerbaijan, a considerable number of ISIS terrorists were called to the area,” he said, referring to the armed group also known as ISIL.

“We’re really not sure they’ve left the area. But they must leave the area.”

Earlier this week, Azerbaijan’s President Ilham Aliyev said during an interview with Turkey’s state-run Anadolu Agency that he was surprised by the planned military exercise.

“Every country can carry out any military drill on its own territory. It’s their sovereign right. But why now, and why on our border?” he said, pointing out that this would be the first time since the fall of the Soviet Union that Iran is making such a show of force so close to the border.

The role of Turkey

After Iran’s military deployment on its border with Azerbaijan, the two allies, Baku and Ankara, are conducting joint military drills in the Nakhchivan province of the Turkic state, sending signals to Tehran.

Across Caucasia, where several conflict zones exist, tensions have continued to escalate between Azerbaijan and Iran, the two Shia-majority countries.

In what appears to be a counter tactic to Tehran’s military buildup close to the border of Azerbaijan, Baku and Ankara have joined forces, conducting military drills.

Iran has recently sent military units to its border with Azerbaijan after Baku reclaimed most of its occupied territories in the disputed region of Nagorno Karabakh, defeating Armenia with the help of Turkey’s drones. Tehran has quietly supported Armenia, a Christian-majority country, in the conflict.

But Turkey, with its newly-started joint drills with Azerbaijan, has indicated that Ankara fully supports Baku against Yerevan and will not allow Tehran to bully its Turkic neighbour, according to experts.

“It could be indeed that Turkey’s and Azerbaijan’s current military drills in Nakhchivan (an Azerbaijani territory neighbouring Turkey) are ratcheting up that tension with Tehran,” says Matthew Bryza, the former US ambassador to Azerbaijan and a senior fellow at the Atlantic Council.

“The situation is very emotional in both countries toward the other. There are protests in front of the Iranian embassy in Baku after the Iranian foreign ministry spokesman made some derogatory statements about Azerbaijan and its military, claiming Azerbaijan’s military is only one one hundredth the size of Iran,” Bryza tells TRT World.

While Turkey-Azerbaijan military maneuvers escalate tensions, it might also mean to send a political message to Yerevan, according to the former diplomat. “Turkey and Azerbaijan might also be sending a signal to Yerevan that it’s time to have serious discussions about defining or demarcating the international border between Azerbaijan and Armenia,” he says.

However, at the same time, Turkey and Iran have shown signs that they are willing to solve this crisis through negotiations.

Turkish Deputy Minister of Foreign Affairs Sedat Önal and his Iranian counterpart, chaired political consultations on October 8 in Ankara, this according to Turkey’s Foreign Affairs Ministry.

The two discussed bilateral relations as well as the situation in the Caucasus, Syria, Afghanistan and Yemen.

Tehran may also be wary of the impact of Azerbaijan’s victories and regional alliances on the Azeri population in northern Iran.

The area is inhabited by a significant Azeri population, estimated to be the largest minority in the country.

The Azeris in northern Iran held public celebrations following Azerbaijan’s victory in the Nagorno-Karabakh conflict and demanded the closure of Iranian-Armenian borders following the war.

“Iran is certainly concerned about Baku’s ambitions towards its territory and the Pan-Turkist propaganda emanating from Baku and even from Turkey,” said Hunter. “However, currently, there is no real threat of separatism in the Iranian Azerbaijan.

“But the landscape could change if the crisis escalates and external powers become involved,” she added. “[Israeli Prime Minister] Naftali Bennett’s suggestion that Iran should be killed ‘by a thousand cuts’ may mean eventual dismemberment of Iran.”