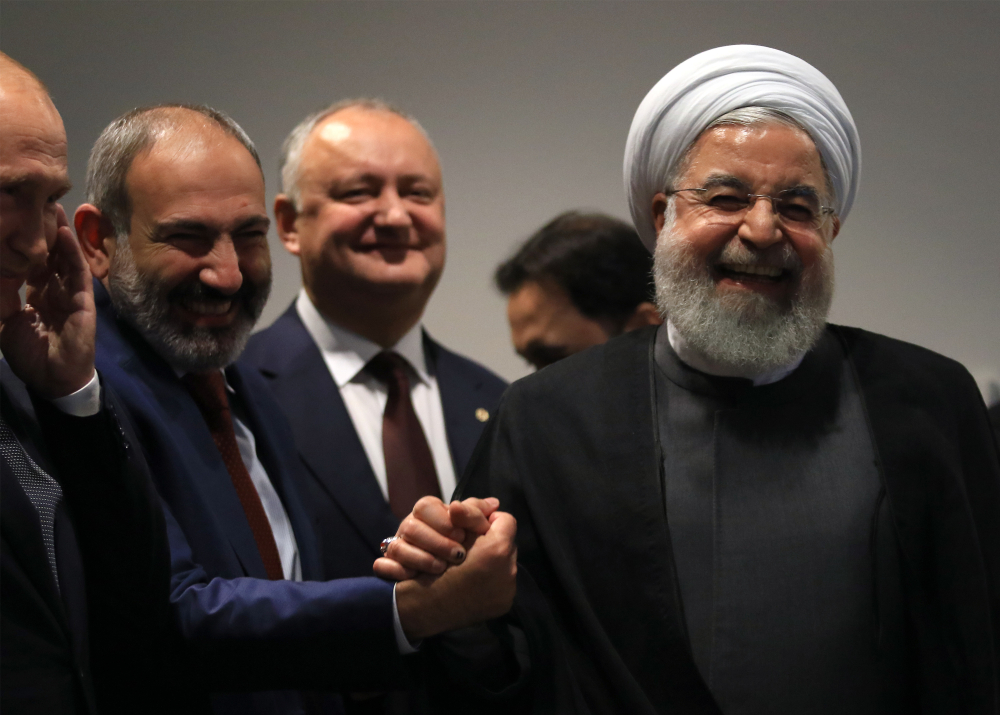 Iran’s deep historical and geopolitical relationship with Armenia has led to many setting eyes on the former when war broke out between Armenia and Azerbaijan over the disputed Nagorno Karabakh region last week. It was speculated that Iran would come to the aid of Armenia in the conflict, despite its cultural and religious connection with Azerbaijain, which, like Iran, is a majority Shia country. As expected there have been several reports of Iran initiating support for the Armenian cause.

Recently, according to reports in Tehran-based local news hubs.  Iran which shares a 765-kilometer border with Azerbaijan has come to the aid of Armenia. According to unconfirmed reports in the Iranian media, the Persian country under the helm of President Hassan Rouhani has sent 200 heavy armoured tanks in a bid to protect its borders. However, according to military experts, the deployment of tanks in such a large number signals that Tehran could be lending a helping hand to Armenia.

Experts believe the tanks are not just meant for safeguarding the borders and territorial integrity of Iran, but for deployment in Yerevan on the call of the Armenian government in power. While there has been no official confirmation on the matter and there are no ways to verify the reports, the developments are in sync with what the Iranian Foreign Ministry had to say recently.

“Movements in the border areas of our country are being seriously and sensitively monitored by the Islamic Republic of Iran, and in this regard, while declaring any attack by any of the warring parties in the region on our country is intolerable, we seriously warn all parties to seriously take care in this regard.” said the Ministry.

While mortal shells and rockets did not cause any casualties inside Iranian territory, according to images and videos doing rounds on social media platforms, the projectiles have indeed damaged houses and farms located in the region.

However, Iran’s foreign ministry on Tuesday denied reports about transferring weapons and military equipment to Armenia. Ministry spokesman Saeed Khatibzadeh said Iran is carefully examining the goods that pass through its borders. “Iran will not allow any kind of weapon and ammunition transfer,” he told a press conference in Tehran. The spokesman said that non-military goods were still crossing between Iran and neighboring countries as usual, adding that the trucks suspected of carrying weapons were transporting normal commercial products.

Is popular opinion forcing Iran to align with Azerbaijan?

Meanwhile, it appears that Iran’s government has been pushed to side with Azerbaijan in the conflict, due to popular opinion in Iran, influenced by the sizeable Azeri population residing in Iran.

Protests have erupted in several Iranian cities, including the capital, Tehran, and and the northwestern city of Tabriz, in support of Azerbaijan in its conflict with Armenia over the breakaway region of Nagorno-Karabakh. Videos posted online appear to show dozens demonstrating in the streets while chanting slogans in Azeri, including “Karabakh is ours. It will remain ours.” Ethnic Azeris constitute a large minority of the Iranian population. Security forces were reported to have dispersed the protesters using tear gas. Clashes were also reported between the protesters and riot police.

Interestingly, on October 1, four representatives of Iranian Supreme Leader Ayatollah Ali Khamenei in four of the country’s provinces with a large ethnic Azeri population released a joint statement in support of Azerbaijan. The statement by Khamenei’s representatives in the provinces of West and East Azerbaijan, Ardebil, and Zanjan said that “there is no doubt” that the breakaway region belongs to Azerbaijan.

“There is no doubt that Nagorno-Karabakh belongs to Azerbaijan and its government’s move to recapture the region is completely legal, according to Shari’a, and in line with four Resolutions of the United Nation’s Security Council,” Khamenei’s representatives have asserted.

“The Azerbaijani government has acted in a completely legal and religious manner in recapturing these lands and has implemented four UN Security Council resolutions,” they wrote in their statement on Thursday. Furthermore, the statement referred to the Azerbaijani soldiers killed in the Nagorno-Karabakh conflict as “martyrs of the great nation of Azerbaijan” and wished them “heavenly high ranks.”

However, although this may seem like an open show of support for Azerbaijan, it may just be a public move to appease the azeri population in Iran, while quietly supporting Armenia in the war.

When considering Iran’s geopolitical ties with Armenia on one hand, and its sizeable Azeri population on the other, the most appropriate position for Iran to take would appear to be mediation of the conflict, and in fact, there are signs that Iran is open to this posibility.

“Iran has prepared a detailed plan, which will be pursued through making consultations with the two sides [of the conflict]. We hope that the two sides end the war, avoid targeting civilians, and know that Iran cannot tolerate clashes on its borders. We have carefully told our friends in both countries that they need to take the necessary care,” Saeed Khatibzadeh, the spokesman for the Iranian Foreign Ministry. said in his weekly press conference on Monday, according to the Islamic Republic News Agency (IRNA).

He said Iran is in contact with all sides and pursues an “important mission.” The spokesman pointed out, “Iran is one of the few players that enjoys good relations with the two warring sides and other regional players. From now on, Iran will have a special position and an important mission.” Katibzadeh did not give any details about the Iranian plan but he implied that preventing encroachment on the Iranian territories may be part of this plan.

Iran’s official stance, after having tried to resolve the long-running conflict in previous decades through diplomatic means, remains one of mediation, calling for an immediate ceasefire and dialogue. Iran, which shares borders with both Armenia and Azerbaijan, last week reassured Azerbaijan that it recognises its territorial integrity and that it holds an important place in Iranian foreign policy.

Considering the various and opposing vested interests in the region, Iranian politician Mohammad Javad Jamali believes resolving the conflict is now more difficult than it was before. “We believe those who foment the killings, especially the US and Israel, would like the fires of conflict to remain aflame,” the former senior member of the Iranian parliament’s national security and foreign policy commission told Al Jazeera.

Iran has called on Armenia and Azerbaijan to stop the war and start a dialogue to resolve differences. “There is no military solution for this decades-long conflict. While respecting the territorial integrity of Azerbaijan, we reiterate that a ceasefire must be declared to start massive political talks,” Katibzadeh noted. From this, it appears that while Iran is taking the position of mediation, it is leaning towards Azerbaijan when highlighting the importance of its territorial integrity in Karabakh.