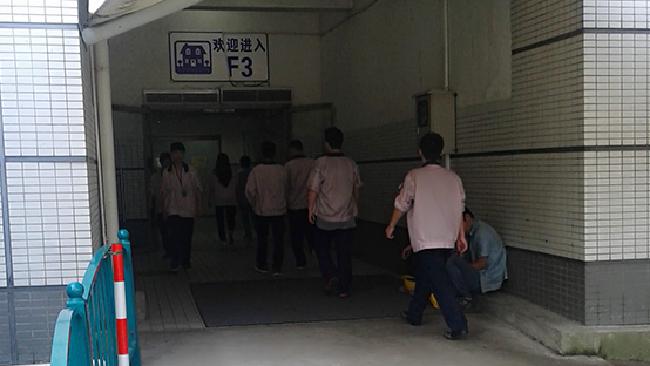 What it’s like to work in Chinese factory assembling iPhones

FOR your average student at the prestigious New York University, Dejian Zeng had a really unconventional Summer internship job.

The 23-year-old student went undercover in a Chinese factory which was contracted to assemble Apple iPhones. Working six days a week on the assembly line he spent the better part of six weeks repeatedly putting screws in the back of Apple’s popular smartphones, over and over again.

Most of us would recoil at the idea but he embarked on the surreptitious mission because he wanted to see “how the workers feel and what their lives were like,” he told news.com.au.

“They’re not happy about it but they’re not very angry,” he said. They mostly come from rural areas and because they feel like they are lacking in education, they don’t have many options.

“They’re kind of expecting it to be very tiring, very boring and that they’re going to have to work long hours,” he said.

During the week Zeng would spend 12 hours inside the factory (but only get paid for 10.5 hours) and screw approximately 1800 screws into 1800 iPhones. He and the rest of the workers would also work an eight hour day on Saturday. Sunday was their only rest day.

For this monotonous and laborious work he was paid 3100 yuan a month after meals and board were taken out, or by today’s exchange rate, just $606.

For the 60 hours weeks he worked, on the occasion there was no forced overtime, that works out to be about $2.50 an hour.

Zeng worked putting screws in the back of iPhone 6s and iPhone 7s and said the various jobs on the assembly line seemed to be handed out at random with the less taxing jobs usually given to female workers.

The investigation was a result of a partnership between NYU and a Chinese NGO called China Labor Watch which periodically sends undercover workers into factories to investigate working conditions.

When Zeng interned with the NGO last year, he soon found himself happily being sent to factory near Shanghai owned by Taiwanese contract manufacturing giant Pegatron which was contracted to assemble the Apple devices.

Getting a job inside the factory was incredibly easy. Zeng said he simply “rocked up” outside the building with a crowd of other job hopefuls during an intake with their luggage in hand. The most strenuous part on the interview process was reciting the English alphabet, he said.

“There was a quick interview process that you show your hands and recite English alphabet. It’s just so easy.”

A vast majority of the workers lived in eight-bed dormitories at the site of the factory for 160 yuan a month, deducted from their salary. The facilities included a gym and a counselling and therapy office for workers.

Employees were not allowed to take any electronics inside the factory production area but Zeng took a number of photos of the living quarters and surrounding areas which he shared with news.com.au.

Job hopefuls would simply show up with their luggage looking for a job in the factory.Source:Supplied

Most workers lived on site for 160 yuan per month.Source:Supplied

The showers in the factory dorms.Source:Supplied

The factory was chosen because according to China Labor Watch at the time it had increased the base wage of workers to comply with new minimum wage laws but at the same time cut stipends and the few benefits afforded to workers, leaving them worse off. As a result Zeng expected workers to strike soon after he arrived but it never materialised.

YELLING IS JUST SO NORMAL

During their days on the assembly line workers would chat to those around them and sometimes sing songs — but that was often punctuated by managers yelling at workers to increase their pace.

“They (managers) had a very bad attitude to workers” and would consistently yell at those not doing their job fast enough, Zeng said. “Yelling is just so normal, you can hear them every day.”

“Every second counts,” was the manager manifesto on the factory floor.

He recalled one incident in which a manager stopped an entire assembly line from working and gathered them together to yell at one worker who was new and wasn’t keeping up the pace.

“One day all of a sudden the manager just totally exploded,” Zeng said. “We were all shocked. That’s just one incident I remember so clearly.”

Workers in their uniform, which includes slippers for the factory floor, waiting to begin work.Source:Supplied

Workers have a card which they swipe for every meal.Source:Supplied

The dining hall for workers.Source:Supplied

Human rights activists and labour rights activists have made a concerted push to highlight any violations and improve the conditions of factory workers in developing economies who underpin the digital revolution in the West.

Another Taiwanese manufacturer of iPhones, the more notorious Foxconn, is also characteristically media shy but the company’s factories have seen their fair share of scrutiny in recent years following a string of worker suicides in 2010, 2011 and 2013. As well as a deadly fire at a plant that manufactured iPads in 2011.

The Pegatron factory where Zeng went undercover was also profiled by the BBC in 2014 and Bloomberg in 2016, both of which reported cases of forced excessive overtime and difficult working conditions.

Apple says it always has staff on the ground monitoring their assembly factories and Zeng did recall seeing them “two or three times” in their highly visible green tracksuits. But when managers knew they were coming they would be on their best behaviour, he said, and instruct the employees to clean up and work quietly.

“And then they (the Apple employees) would just walk by. That would be it.”

Apple technicians were also occasionally required to monitor that products were being assembled properly.

DON’T TAKE YOUR PRODUCTS FOR GRANTED

Dejian Zeng graduated this week with a Masters in Public Administration from NYU and plans to work for a human rights based organisation with a focus on China.

As for his stint undercover, and the report that ensued, he says it was all about making customers of Apple products aware of what they’re buying and how it got to them.

“When you use your iPhones and Macbooks, don’t take it for granted. And realise that there’s thousands of people working day and night, like 24 hours, in the factory to produce the product that you are using,” he said.

Investigations like these by the Chinese NGO are also aimed at the company themselves which are selling the end product in hopes they will be pressured into improving conditions for overseas factory workers.

“We want Apple to see it. A lot of the time the target is Apple,” Zeng said. “We think there is some work to be done.”

Dejian Zeng graduated this week with a Masters in Public Administration.Source:Supplied