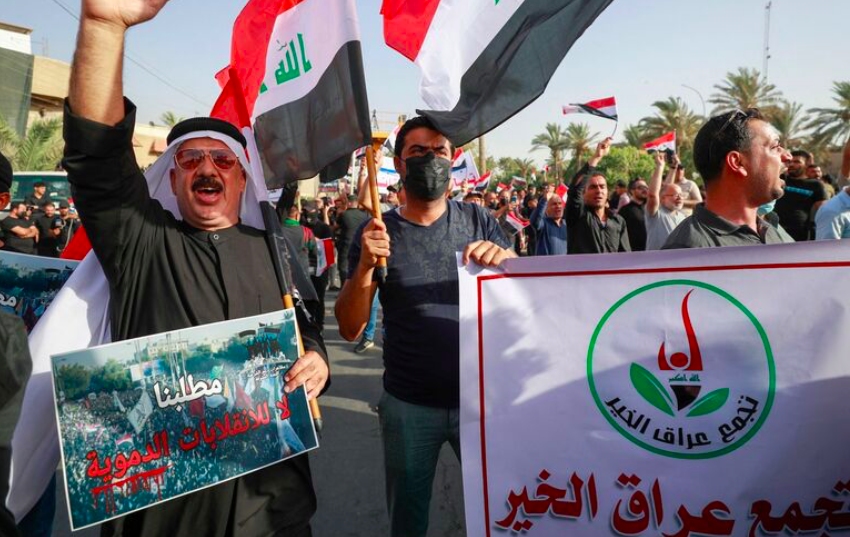 At least 30 al-Sadr supporters were killed in nearly 24 hours of clashes that erupted on Monday after his supporters stormed the government offices.

The violence moved to the country’s south on Thursday where overnight clashes between al-Sadr-affiliated fighters and Iran-backed Asaib Ahl al-Haq forces killed four people. Two members of al-Sadr’s Saraya al-Salam forces were among those killed.

Lawmakers affiliated with Iraq’s Shia cleric Moqtada Al-Sadr yesterday filed a lawsuit challenging the acceptance of their resignation from parliament where they held the highest number of seats, Anadolu news agency reported.

According to the state news agency INA, the Federal Supreme Court set 28 September as a date to look into the appeal.

In June, 73 MPs from the Sadrist movement resigned amid a standoff over the formation of a new government.

Tensions have been running high across Iraq in recent weeks over the failure of Shia groups to agree on a new prime minister since the country’s last elections in October.

More than 30 protesters were killed last week when Al-Sadr supporters stormed the Republican Palace, where the government is seated in Baghdad after the leader said he was stepping down from politics.

Moqtada al-Sadr has been a powerful figure in Iraq since the fall of Saddam Hussein in 2003.

The Shia Muslim cleric rose to prominence after the US-led invasion, when his fearsome Mehdi Army militia fought foreign troops and was blamed for running sectarian “death squads”.

Over the past decade he reinvented himself as a nationalist and an anti-corruption campaigner, emerging as a political kingmaker.

But a stand-off between him and his Iran-backed rivals following inconclusive parliamentary elections in October 2021 left the country without a new government and triggered deadly unrest 10 months later.

Moqtada al-Sadr is the youngest son of the eminent Shia Muslim cleric Grand Ayatollah Muhammad Sadiq al-Sadr – who was assassinated in 1999, reportedly by agents of Saddam Hussein’s regime.

He was virtually unknown outside Iraq before the March 2003 invasion. But in the upheaval that followed, Mr Sadr emerged as the champion of disadvantaged and disenfranchised Shia, who did not feel represented by the quietist clerical establishment or previously exiled politicians.

Mr Sadr formed an unlikely alliance with six mostly secular groups for the 2018 polls. Saeroun (Marching Towards Reform), which pledged to fight corruption and reject foreign interference in Iraq, emerged as the surprise winner, securing 54 of the 329 seats in parliament.

After several months of deadlock, Mr Sadr agreed to nominate the veteran Shia Islamist politician Adel Abdul Mahdi as prime minister. In return, his supporters were appointed to top posts in ministries and state bodies.

Last year, mr Sadr attempted to exclude his Shia rivals’ bloc, the Co-ordination Framework, from the new government by joining forces with Sunni Arab and Kurdish blocs in parliament. But months of deadlock followed, as he was unable to secure enough votes for his choices of president and prime minister.

After the October 2021 elections, two main Shiite groups appeared on the Iraqi political scene: the Sadrist movement, led by the populist cleric Muqtada al-Sadr, and the Coordination Framework, which included Shiite forces close to Iran.

The Coordination Framework stymied the efforts of the Sadrist movement and its allies — the Kurdistan Democratic Party led by Masoud Barzani and the Sunni Taqaddum Party headed by Muhammad al-Halbousi — to form a government.

Selecting the president, which is an essential part of forming a government, requires a two thirds vote, and the framework was able to form a blocking third in the parliament.

The process has since been deadlocked, and has included demonstrations and protests organized by both groups, including the Sadrist occupation of the Iraqi Council of Representatives, or parliament.

The Coordination Framework is not a political party or coalition, it is an umbrella for Shiite parties to coordinate. The Sadrist movement was a part of it before withdrew in early 2021. The Coordination Framework meets on a weekly basis but does not have a fixed headquarters. Its meetings are periodically held at the offices of one of its leaders.

While one cannot say that the bloc’s leaders are on the same page, they are all pursuing a common goal of opposing Sadr, because they know that Sadr’s growing influence means greater exclusion for them.

It is unlikely that intra-Shia rivalry, even armed conflict, will be a major concern, for many reasons. Most importantly, the militias are under the control of their leaders, so when the latter make public statements, the militias act. For example, on 29 August, Al-Sadr pulled out of politics, which sparked off the violence, and a curfew was declared until further notice. As the situation escalated, Al-Sadr called on his followers the next day to leave the streets within sixty minutes, which they did. A few hours later, the government ended the curfew. Similar obedience is expected from the other militias. Such control can start or end major confrontations, but can be very dangerous if the leaders insist on escalating matters.

Furthermore, none of the Shia militia leaders will be willing to take the blame for initiating a conflict between Shia groups. The Coordination Framework may have called Al-Sadr a betrayer of the Shia, but moving political disagreements to an armed level will weaken the Shia achievements in the post-2003 era. Nevertheless, even if the situation does get out of control, a fatwa from Al-Sistani can calm things down.

Iran has the biggest influence in Iraq generally and on the framework leadership. It has no interest in having an uncontrollable situation in a neighbouring country. Weakening the Shia militias also means a weak role for Iran in Iraq. Thus, many Iranian officials have visited Iraq recently to ease the tension.

Prime Minister Mustafa al-Kadhimi said on Tuesday he would step down if violence continued, in a statement made hours after fighting had already stopped.

Angered by a months-long political crisis, thousands of Iraqis have taken to the streets of the capital, Baghdad, days after deadly clashes between rival Shia groups sparked fears of widespread unrest.

Demonstrators shouted the Arab Spring slogan “People want the fall of the regime” and “Iran will not rule any more”.

“They are chanting against the Iranian-backed politicians,” Abdelwahed said. “They don’t want any government to be manipulated by Iran, whom they accuse of having ruined the country for years.”

Iraq on Monday moved closer to a snap parliamentary election after crisis talks in Baghdad.

They “agreed to form a technical committee comprising the various political forces … to bridge differences with the aim of reaching early elections,” Al-Kadhimi’s office said after the talks.

Representatives of the influential Shiite cleric Muqtada Al-Sadr failed to attend the meeting, but the dissolution of parliament and an immediate election are key demands of Al-Sadr and his bloc.