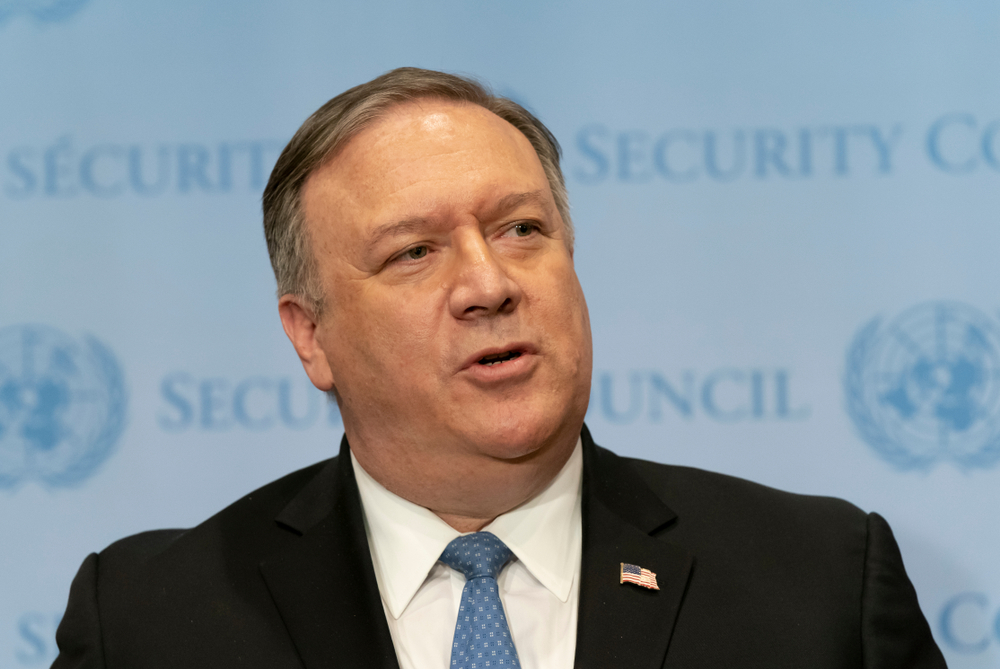 US demands UN sanctions against Iran

The administration of US President Donald Trump has formally notified the United Nations that it wants all UN sanctions on Iran restored, claiming significant Iranian violations of the 2015 nuclear deal, in a move that drew swift rejections from countries that remain part of the agreement.

Secretary of State Mike Pompeo delivered the notification to the president of the UN Security Council on Thursday, and later told reporters the US had the right to reimpose sanctions under UN resolution 2231 that laid out the rules of the deal between Iran and six world powers. The US withdrew from the accord in 2018. “We think this is really straightforward we think this is very simple,” Pompeo said. “These UN Security Council resolutions will come back into place 31 days from now, and the United States will vigorously enforce them.”

The UK, France and Germany the so-called “European 3”, all elected to abstain from a proposal by the US to bring back sanctions on Iran previously eased as part of the 2015 Joint Comprehensive Plan of Action (JCPoA), commonly known as the “Iran Nuclear Deal” brokered by former US President Barack Obama. The JCPoA includes the option for a 2007 UN arms embargo on Tehran to expire in October 2020, which Washington believes should remain in place, citing Iran’s failure to comply with terms agreed on its production of enriched uranium. Its arguments failed to convince the UN Security Council last week.

Britain, France and Germany released a joint statement saying they would not support the action “which is incompatible” with efforts to preserve the JCPOA. “We call on all UNSC members to refrain from any action that would only deepen divisions in the Security Council or that would have serious adverse consequences on its work,” they said.

Furthermore, The US is putting pressure on the UK over the reimposition of UN sanctions on Iran, following London’s abstention on a crucial Security Council vote last week.

This has led many to notice the US’s increasing isolation in the UN and the international community, especially under the Trump administration, as will be elaborated on below.

The US maintains that its withdrawal from the nuclear deal does not remove its right as an original participant and a permanent Security Council member to demand the restoration of sanctions. That argument, however, has already been rejected by the other members of the council, including US allies the United Kingdom and France, along with China and Russia.

A diplomatic standoff over restoring international sanctions against Iran may be the most vivid example yet of how the United States has largely isolated itself from the world order, instead of isolating Tehran, as the Trump administration intended. At nearly every step President Trump has taken in his dogged pursuit to demolish a 2015 accord limiting Iran’s nuclear program, he has run into opposition, including from America’s strongest allies in Europe.

When the US pulled out, Britain, France and Germany have largely been left to hold the accord together, creating festering diplomatic resentments and fueling perceptions of the United States as an unreliable partner. The countries cite a different legal technicality in the nuclear deal to prevent Mr. Trump from forcing through the international sanctions.

This is not the first time the US is isolated in recent years, as this year, in a major setback to the Trump administration’s pursuit of a WHO revamp on American terms, both Germany and France, two of Europe’s most influential players as well as allies of the United States, have withdrawn from the scheduled talks scheduled for September. Both countries have cited frustration over the United States leading the negotiation process as justification for withdrawal, jeopardizing Washington’s goal of ensuring maximum support for a sweeping overhaul of the world health body.

With the scheduled WHO talks in September clouded with uncertainty, the recent withdrawal of Germany and France has dealt a major blow to Trump’s push for a common “roadmap” on reforming the organization.

It is clear that the US’s incresasing isolation in major decisions could have a negative impact on Trump’s popularity ahead of the upcoming elections.

Meanwhile, Iran is not budging on its nuclear policy, and has also noticed the US’s isolation. Iran has hailed the UN Security Council vote that rejected a US bid to extend an arms embargo on the Islamic republic, saying Washington has “never been so isolated”. In the Security Council vote on Friday, the US got support only from the Dominican Republic for its resolution to indefinitely extend the arms embargo on Iran, leaving it far short of the minimum nine “yes” votes required for adoption. Eleven members on the 15-member body, including France, Germany and the United Kingdom, abstained. “In the 75 years of United Nations history, America has never been so isolated,” foreign ministry spokesman Abbas Mousavi tweeted. “Despite all the trips, pressure and the hawking, the United States could only mobilise a small country (to vote) with them,” he added, in reference to failed efforts by US Secretary of State Mike Pompeo to rally support for a US resolution.

In addition to this, a group of hard-line lawmakers in Iran’s parliament have drafted legislation that would oblige the government of President Hassan Rouhani to withdraw from the Iran nuclear deal, formally known as the Joint Comprehensive Plan of Action (JCPOA). The “double-urgency” draft legislation has already been signed by 49 lawmakers. The departure, based on the text of the proposal, would take place if a snapback of sanctions is triggered against Iran. Under the draft legislation, dubbed “automatic pullout,” Iran’s withdrawal from the agreement would have to take place within 72 hours after a reinstatement of Security Council sanctions resolutions against Tehran as such a move “will make Iran’s presence in the deal futile.” The legislation seems to have been prompted by an intensifying US effort to trigger the dispute mechanism enshrined in articles 36 and 37 of the JCPOA which has been discussed earlier.

Iran also continues to strengthen its missile capabilities, as Iran unveiled a new surface-to-surface ballistic missile on Thursday, a move likely to peeve Washington as the Trump administration attempts to rein in the regime’s missile and nuclear weapon ambitions. Iranian Defense Minister Amir Hatami said in a televised address that the missile has a range of approximately 870 miles and is named after Iranian Gen. Qasem Soleimani, who was killed in an U.S. strike in Iraq in January. Hatami also said the regime had a new cruise missile boasting a range more than 620 miles and was named after Iraqi militia commander Abu Mahdi al-Muhandis, who also was killed in the strike.

It is clear that the US is increasingly isolated in its aggressive policy towards Iran, and Iran is taking advantage of this weakness geopolitically and militarily.