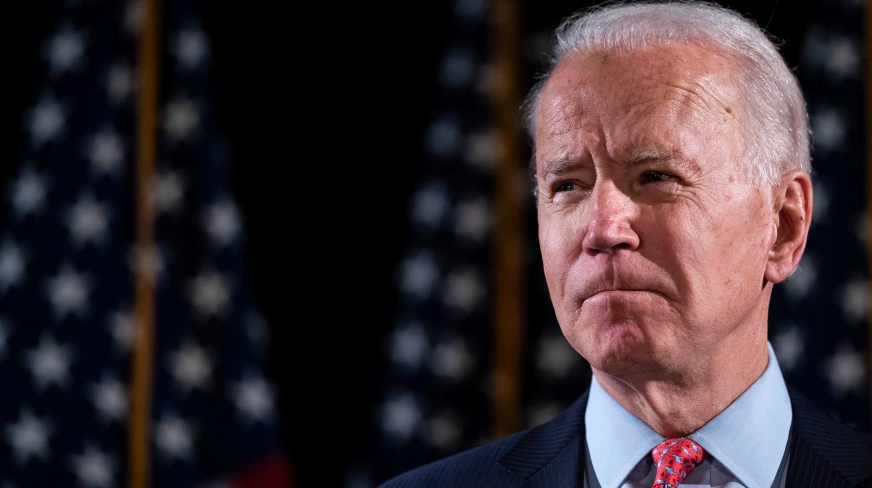 President Joe Biden said the United States will not offer sanctions relief as a way to entice Iran back to the negotiating table over the country’s nuclear program.

Biden, in a clip from a CBS interview on Sunday, indicated that Iran would have to stop enriching uranium before his administration would lift sanctions.

When asked if the U.S. would lift sanctions to get Iran back to the negotiating table, Biden said “no.”
This has sparked a tense start to Iran-Biden relations and could complicate any prospects of returning to the nuclear deal.
Tensions between Washington and Tehran have mounted following former President Donald Trump’s withdrawal from the landmark nuclear agreement.

The 2015 Joint Comprehensive Plan of Action, brokered by the Obama administration, lifted sanctions on Iran that had crippled its economy and cut its oil exports roughly in half. In exchange for sanctions relief, Iran accepted limits on its nuclear program until the terms expire in 2025.

The U.S. and its European allies believe Iran has ambitions to develop a nuclear bomb. Tehran has denied that allegation.

Trump withdrew the United States from the JCPOA in 2018, calling it the “worst deal ever”

Following Washington’s exit from the landmark nuclear deal, other signatories of the pact ⁠— France, Germany, the U.K., Russia and China ⁠— tried to keep the agreement alive.

Tehran has refused to negotiate while U.S. sanctions remain in place.

“Iran has fulfilled all its obligations under the deal, not the United States and the three European countries … If they want Iran to return to its commitments, the United States must in practice … lift all sanctions,” state TV quoted Khamenei as saying.

“Then, after verifying whether all sanctions have been lifted correctly, we will return to full compliance,” he reportedly added.

On the other hand, the Biden administration has repeatedly said it will return to full compliance with the deal, formally known as the Joint Comprehensive Agreement Plan of Action (JCPOA), once Iran does. In other words, Biden will lift sanctions imposed by Trump only after the clerical regime reverses nuclear steps it took.

Doubt have begun to spread in Iran about the prospects of Biden’s presidency being as tense as Trump’s.

The only declared candidate in Iran’s presidential elections this June has accused Joe Biden of continuing Donald Trump’s foreign policies, and warned that Tehran is preparing retaliatory measures to force the US to change its diplomatic trajectory.

In an interview with the Guardian, Hossein Dehghan, a military adviser to the supreme leader, Ayatollah Ali Khamenei, said Washington was not in a position to set preconditions for Iran’s return to the 2015 nuclear deal, and called for guarantees that the US will not leave the agreement again.

“The Biden administration talked about diplomacy, multilateralism and interaction in the international arena as well as returning to its international commitments. However, we still see the same policies from the newly elected administration as we did from the Trump team: not lifting the oppressive sanctions against Iranian people, continuing to block Iran oil revenue in foreign banks while we need the money to fight against the coronavirus pandemic. Altogether this means the continuation of Trumpism in international relations.”

Meanwhile, in another sign that Iran has not placed its trust in Biden in reaching a nuclear deal, Iran has continued engaging in military drills in recent weeks. However, it is important to note that the drills were also taken in response to Israel’s reported plans of attacking Iran last month.

On the 19th of January, Iran’s army conducted another drill along the country’s southern coasts days after the United States flew nuclear-capable B-52 bombers over the Middle East.

In what was the fifth military show of force in two weeks, the army’s ground forces held land, air, and sea war games along the coast of Makran and the Sea of Oman.

State broadcaster aired dramatic footage of dozens of Iranian soldiers parachuting out of aeroplanes while images released by the army show attack helicopters, tanks and missiles in combat, and hundreds of personnel ready to be deployed.

The army also said it is deploying rapid response forces to test out “a variety of creative indigenous tactics” and is using divers to complete predefined scenarios.

More recently, Iran’s army test fired a sophisticated short-range missile on Sunday, state media reported.
The report by the official IRNA news agency quoted the chief of the army’s ground forces, Gen. Kioumars Heidari, as saying that the missile’s range was 300 kilometers, or 186 miles.
Gen. Heidari said the “smart” missile is capable to work in under “any weather condition.” He did not say where the test took place.
Iran’s national army controls short-range missiles, although longer-range ones capable of traveling up to 2,000 kilometers (1,250 miles) — far enough to reach archenemy Israel and US military bases — are controlled by the paramilitary Revolutionary Guard.

It is widely believed that Iran has increased its military drills as the country is trying to pressure President Joe Biden to reenter a previous nuclear accord that his predecessor Donald Trump abandoned.

Iran is also attempting to strengthen military and economic ties with Russia in recent weeks, as it is also in Russia’s interest, due to Biden’s more hostile stance towards the power than his predecessor Trump.

Iran is set to hold a joint naval exercise with Russia and China, two superpowers, in the Sea of Oman and the Northern Indian Ocean.

The news of naval drill was first broke out by Levan Dzhagaryan, the Russian ambassador to Tehran. Dzhagaryan announced last week that Russian, Iranian, and Chinese will hold naval drills in the Indian Ocean in mid-February.

The military exercise is intended to work out interaction during search and rescue operations and measures to ensure the safety of navigation, Dzhagaryan told RIA Novosti.

The last joint naval drills involving the three countries were held at the end of December 2019.

Admiral Habibollah Sayyari, the deputy coordinator of the Islamic Republic of Iran’s Army, said on Sunday the planned naval exercise with Russia demonstrates the naval power of Iran, according to Mehr news agency.

“When the powerful Russian navy conducts exercises with the navies of the Islamic Republic Army and the Islamic Revolutionary Guard Corps, it sends a clear message,” said Admiral Sayyari.

Pointing to high tech capabilities of the Iranian Navy, he noted, “Iran’s Navy is at the level of the world naval powers in terms of equipment, manpower, technique and tactics, command and control, communication and access to new equipment.”

Pointing to various foreign threats to Iran’s national security, the admiral said, “Our country has been facing many threats since the first days of the victory of the Islamic Revolution, and the enemies have put forward various plans in this regard, all of which have failed.”

“The Armed Forces of the Islamic Republic of Iran, especially the Army, with regard to its mission of maintaining territorial integrity and independence, has achieved authority and dignity and will definitely respond to the threats of enemies.”

Deputy Foreign Minister of Russia Sergei Ryabkov has called on the U.S. and Europe to ensure Iran’s economic interests in the JCPOA and make a move in this regard.

“We shared our ideas on how to synchronize steps for JCPOA return. Iran’s actions are reversible should there be a shift in the right direction. Restoring Iran’s economic bonuses is key. U.S. & E3 should make a move, Iran will respond constructively,” Ryabkov said, according to a tweet by Permanent Mission of Russia to international organizations in Vienna.

Mikhail Ulyanov, Russia’s permanent representative to international organizations in Vienna, commented on the remarks of his colleague.

“The last sentence seems to be absolutely relevant judging by the statements of the Iranian officials. Hopefully, the countries whom it may concern fully understand that. They have significant experience to make the right conclusions. No question about that,” he said in a tweet on Friday.

Earlier this month, Ulaynov demanded that the United States make the first move to revive the nuclear deal between Iran and major world powers.

The speaker of Iran’s parliament Mohammad Bagher Ghalibaf on Friday said his country’s plans to join the Russian-led Eurasian Economic Union of states. According to Ghalibaf, Tehran would take its first steps to join the organization of nations from Eastern Europe and Western and Central Asia in two weeks.

Ghalibaf made the remarks following a meeting with Russia’s President Vladimir Putin during a three-day trip to Moscow. During his trip, the parliamentary speaker also held talks with members of Russia’s State Duma and discussed economic matters with senior government officials.

Formed in 2014, the EAEU enables joint policies on issues such as macroeconomics, transportation, industry, customs, and antitrust regulations and allows for the free movement of goods. Its members include Russia, Kazakhstan, Uzbekistan, Moldova, Belarus, Kyrgyzstan, and Armenia.

Western states have expressed concern Iran could take advantage of the coastal trade with Russia and other countries afforded by the EAEU to bypass US sanctions and advance its nuclear program. Iran’s recent acceleration of this project therefore shows that Iran are cautious and do not fully trust Biden and his plans of lifting sanctions.