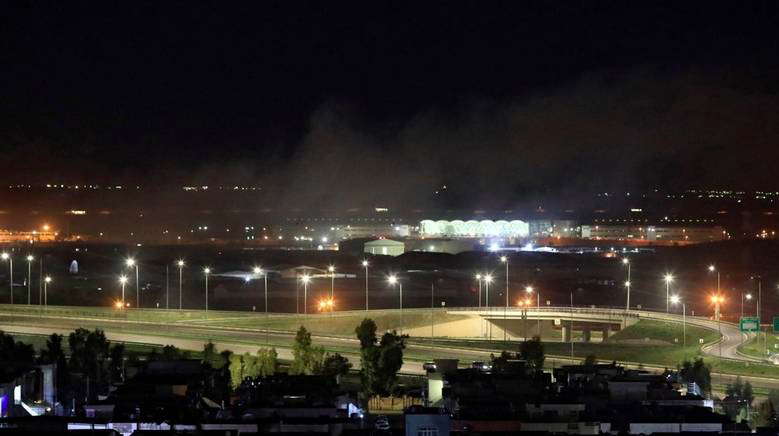 A volley of rockets targeting an US airbase in Iraq’s Kurdistan region killed a foreign civilian contractor and wounded nine others including Americans in the worst attack in a year on the US-led military coalition.

The rockets were launched late on Monday from an area south of the main city Erbil near the border with Kirkuk province and also fell on some residential areas close to the airport, officials said on condition of anonymity.

The barrage was the first time in nearly two months that Western military or diplomatic installations were targeted in Iraq after a string of similar incidents last year.

The rare attack on Erbil was claimed by a little known Shia group calling itself Awliyaa al-Dam, or Guardians of Blood.

About a dozen such groups have cropped up in the past year claiming rocket attacks, but US and Iraqi security officials say they are front groups for prominent pro-Iran factions including Kataib Hezbollah and Asaib Ahl al-Haq.

“The American occupation will not be safe from our strikes in any inch of the homeland, even in Kurdistan, where we promise we will carry out other qualitative operations,” the Awliyaa al-Dam said, according to the SITE Intelligence Group, an NGO that tracks online activity of armed organisations.

The United States reacted angrily to the base assault outside the international airport in Erbil, capital of Iraq’s semi-autonomous Kurdish region.

“We are outraged by today’s rocket attack,” Secretary of State Anthony Blinken said in a statement, vowing to “hold accountable those responsible”.

“Initial reports indicate that the attacks killed one civilian contractor and injured several members of the Coalition, including one American service member and several American contractors,” he said.

Masrour Barzani, prime minister of the autonomous Kurdish region, condemned the assault “in the strongest terms”.

Iran trying to establish their control of Iraq

Details emerged on Tuesday after a deadly attack on a base housing US and coalition forces at Erbil International Airport on Monday evening. Two rocket launchers, capable of firing salvos of 10 rockets each, were found attached to a vehicle that had been blown up near Erbil. Erbil is the capital of the autonomous Kurdistan region of Iraq. US forces have been concentrated there after withdrawing from a half dozen of places across Iraq in 2020. In September, pro-Iranian militias targeted Erbil with rockets. Iran also targeted Erbil in its January rocket fire at US forces.
This shows that Iran knows the location of US forces in Erbil. We also know that pro-Iranian militias, which number around 100,000 fighters in Iraq, are deeply entwined with Iraq’s security forces. These include terrorist groups such as Asaib Ahl al-Haq, Kataib Hezbollah and Harakat Hezbollah al-Nujaba, as well as large militias like Badr and its Shebek 30th brigade in the Nineveh plains west of Erbil. These groups have been around for decades in some cases, dating to the Iran-Iraq war, when some Iraqi Shi’ites joined Iran’s IRGC. Later, the militias were formalized after 2003 and in 2014, a fatwa raised more of them to fight ISIS. In 2018, they became an official paramilitary force, a hybrid of Hezbollah and the IRGC.
In 2019, Iran ordered Kataib Hezbollah to begin firing rockets at US forces in Iraq as US-Iran tensions grew. After the US killed Kataib leader Abu Mahdi Al-Muhandis in January 2020, the militias shifted tactics to using new, largely fake, groups to carry out the attacks. These would consist of hard-core members linked to Kataib, but would be branded under new names. This may have been what led to the creation of Awliya al-Dam, the group that claimed responsibility for the Monday evening attack.
Iran has in recent years been strengthening its influence in Iraq, and is looking to further increase it in the upcoming Iraqi elections in October. The latest attacks on the US base could therefore be a warning from Iran to the US and Biden, not to try to re-establish US involvement and influence in Iraq.

As the latest attack targets a US base, questions are arising as to US president Joe Biden’s policy towards Iraq, and what it will consist of. Will the recent attacks, and Iran’s strengthening grip hold on Iraq, act as an excuse for Biden to redeploy US troops in Iraq?

Interestingly, when the war was debated and then authorized by the US Congress in 2002, Democrats controlled the Senate and Biden was chair of the Senate committee on foreign relations. Biden himself had enormous influence as chair and argued strongly in favor of the 2002 resolution granting President Bush the authority to invade Iraq.

The Iraq war has generally been seen as one of the worst US foreign policy blunders in decades. It fueled the spread of terrorism and destabilized the Middle East and parts of north Africa. “Isil is a direct outgrowth of al-Qaida in Iraq, that grew out of our invasion,” noted President Obama.

Biden’s strong support for the war, although in the distant past, brings back the idea that Biden wants a strong US presence in Iraq, as involvement would now have more justification in the US’s eyes, in light of the Iranian threat.

Former President Donald Trump had one main goal in his mind: To withdraw from Iraq and Afghanistan and reduce America’s dependence on the Middle East. By the time he left office, the number of US troops in Iraq had dropped to 2,500. The drawdown took place at a critical time for Prime Minister Mustafa Al-Kadhimi, who came to power in the wake of popular uprisings against rampant corruption, poor public services, and flagrant Iranian meddling. Al-Kadhimi’s mission of curtailing the power of the PMU, stamping out corruption, and leading the country toward free and fair elections was made more complicated by the killing of Soleimani and PMU head Abu Mahdi Al-Muhandis early last year.

During his election campaign and afterward, Biden hardly mentioned Iraq. His top foreign policy team, including his choice for secretary of state, Antony Blinken, and defense secretary, Lloyd Austin, know Iraq well. And yet little is known about Biden’s vision for the US’ relations with Iraq.

Therefore, although there are strong indicators that Biden wants to re-establish US influence in Iraq, nothing is clear yet, and the latest attacks on the US airbase could either act as a catalyst for US deployment, or act as a deterrent.