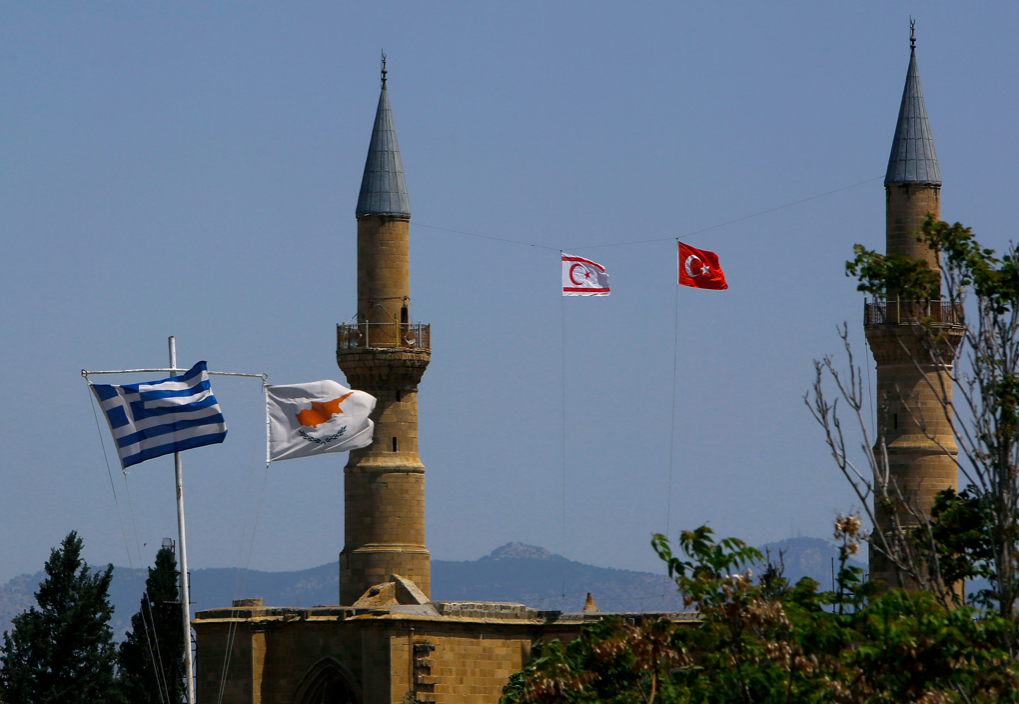 Three days of U.N.-mediated talks are under way to try and reunify the island of Cyprus, which has been divided between Greek and Turkish Cypriots since 1974. That was when Turkey invaded Northern Cyprus in response to a Greek-backed military coup on the island.

The Greek Cypriot and Turkish Cypriot leaders, as well as foreign ministers of three guarantor States – Greece, Turkey and Britain, the former colonial ruler of Cyprus — will be holding so-called informal talks over the coming days.

U.N. Secretary-General Antonio Guterres convened this meeting to test the waters, so to speak. His spokesman, Stephane Dujarric, said the aim of the meeting is to determine whether there is enough common ground for the parties to negotiate a lasting solution to the Cyprus issue within a foreseeable horizon.

She said those talks would be followed later with a meeting between Guterres and Nicos Anastasiades, leader of the Greek Cypriot administration, at Geneva’s Intercontinental Hotel not far from the Palais des Nations, the UN’s European headquarters.

The UN secretary-general was then to host a reception for the heads of delegations in the early evening with a strong police presence around the hotel.

The Turkish delegation is headed by Foreign Minister Mevlut Cavusoglu.

The plenary session of the talks is to start on Wednesday.

Ahead of the talks, Stephane Dujarric, spokesman for Guterres, said: “The secretary-general is realistic. This is an issue that he knows well. He has participated in discussions before. So, he is realistic.”

He said Guterres decided to call this “informal meeting” following consultations over the past several months.

Speaking on the 5+1 format, Dujarric said it “is basically the leaders of the two communities, plus Greece, Turkey, and the UK. That format is really based on historical precedent.”

In 1878 the island of Cyprus in the Eastern Mediterranean Sea, came under British control. Its population is made up of both Greek and Turkish Cypriots. The Greek Cypriot majority desired the removal of British rule and union with Greece, known as Enosis. In 1955, the campaign for Enosis was led by Archbishop Makarios of the Cyprus Orthodox Church and by Colonel George Grivas, Head of Ethniki Organosis Kuprion Agoniston – National Organisation of Cypriot Fighters (EOKA). They aimed to achieve Enosis by attacking government and military installations and personnel and by mobilising the civilian population to demonstrate against the British presence.

EOKA launched its campaign on 1 April 1955 with a series of bombing attacks against government offices in the island’s capital Nicosia. No one was killed in these initial attacks but EOKA began a campaign of assassination mainly aimed at Greek members of the police force and those who disagreed with the idea of Enosis. A state of emergency was declared by the island’s governor, Lord Harding, in November 1955. The British Government started the process of looking for a political solution. In March 1956, Makarios was exiled to the Seychelles, but the emergency continued. Large numbers of British reinforcements arrived and began a series of operations against EOKA centred on the Troodos Mountains.

These attacks continued throughout 1958, even after Makarios had abandoned his initial demand for Enosis. They finally ended in February 1959 when agreement was reached in London for Cyprus to become an independent republic. Britain would retain two sovereign base areas at Akrotiri and Dhekeila.

In August 1960 Cyprus became a republic but, in the following decades, it was plagued with violence between the Greek and Turkish communities. In 1974 a Greek military coup, which aimed to unite the island with mainland Greece, led to a Turkish invasion and the division of the island between Turkish Northern Cyprus and the Greek Cypriot Republic of Cyprus. Cyprus remains divided to this day. Turkey states that the  Greek Cypriot coup aiming at Greece’s annexation led to Turkey’s military intervention as a guarantor power. The TRNC was founded in 1983.

Cyprus has been mired in a decades-long struggle between the Greek and Turkish Cypriots, despite a series of diplomatic efforts by the UN to achieve a comprehensive settlement.

The Greek Cypriot administration, backed by Greece, became a member of the EU in 2004, although most Greek Cypriots rejected a UN settlement plan in a referendum that year, which had envisaged a reunited Cyprus joining the EU.

Can a solution be found?

Among the harsh backdrop of failed negotiations, earning the name of ‘the graveyard of diplomats’, as well as the large differences in positions between the Turks and Greeks, it remains hard to be optimistic about the current talks.

Three attempts at reunification have failed since 2004 – the most recent at the Swiss resort town of Crans Montana in 2017.

Last October, Turkish Cypriots elected Ersin Tatar, a president who says it is time to give up on forming a bizonal, bicommunal federation, which has been the UN goal for two and a half decades.

Instead, Tatar says, Cyprus should split into two states – a position backed by Ankara.

This brings Turkey and Tatar into direct opposition to Greece and Cyprus.

“The solution can only be found in the context of a bizonal, bicommunal federation – one sovereignty, one nationality, one international representation, including, of course, the departure of occupying armies and abolition of the Treaties of Guarantee,” said Greek Prime Minister Kyriakos Mitsotakis on March 21, when he met with Cyprus President Nikos Anastassiades in Athens.

On a more positive note, although the concepts of federation and separate states are completely different, they can in theory be reconciled, due to the common ground in wanting to separate the Island into separately governed territories to differing extents.

But Turkish Cypriots say Greek Cypriots refuse to accept them as 50-50 partners in a federal partnership – what they term “political equality” or equal decision-making powers.

Since the last talks failed in 2017, several new factors have been added to longstanding sticking points over security, property rights of displaced populations, and political equality.

Turkey has been adamant about keeping its forces in place and the Treaty of Guarantee intact, but thanks to its military presence and other recent developments, some observers believe that it is Turkey which now holds the key to a solution.

The experts interviewed by Euronews were not optimistic that the UN meeting would lead to a major breakthrough in the peace talks.

“The situation does not allow for much optimism as to where a common denominator can be found in negotiations forward,” said Anna Koukkides-Procopiou, a Senior Fellow at the Center for European and International Affairs at the University of Nicosia.

However, this is overly pessimistic. Recent months have shown that Turkey and Greece are able to have productive dialogue when both sides are willing to. This has created an unprecedentedly positive geopolitical atmosphere under which negotiations can take place, despite the remaining sources of tension between the two neighbors.

Overall, although it is hard not to be pessimistic when it comes to Cyprus talks, there is a glimmer of hope that this renewed effort can produce at least some sort of compromise.