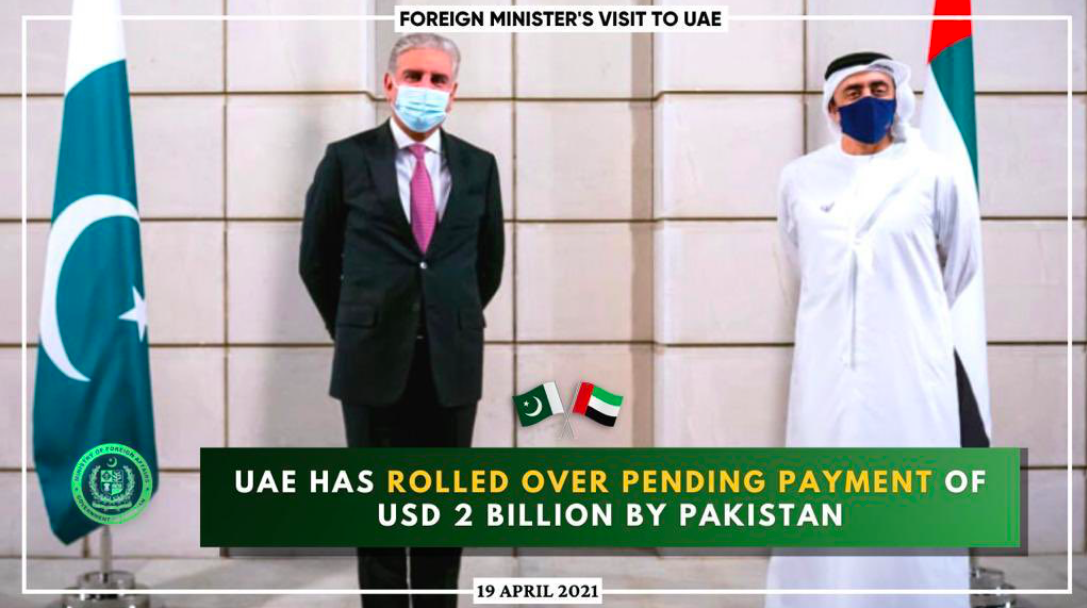 The UAE has extended the repayment of a $2 billion deposit given to Pakistan by the Abu Dhabi Fund for Development (ADFD) in January 2019 to boost liquidity and help overcome financial crisis faced by the South Asian country.

A total of $3 billion lifeline was deposited by the UAE with the State Bank of Pakistan in January 2019 to help fill current account deficit gap and improve foreign exchange reserves to support Pakistan’s currency.

Qureshi landed in the UAE on Saturday on a three-day official visit and will fly out to Iran today as part of his regional visit. It is the Pakistani foreign minister’s second visit to the UAE in the last four months, reflecting growing bilateral relations and high-level contacts between the two countries.

The loan was initially made to help Pakistan avert a potential balance of payments crisis. Pakistan’s economy continues to struggle with sluggish growth amid the coronavirus pandemic.

“[Qureshi] emphasised the need for nurturing and strengthening people-to-people linkages, as well as removing impediments that hamper travel between the two countries,” said a foreign ministry statement.

The UAE is home to an estimated 1.6 million Pakistanis and is a key source of foreign remittances for the Pakistani economy.

United Arab Emirates (UAE) Ambassador to Pakistan Hamad Obaid Ibrahim Al Zaabi has said that the wellbeing of the people of Pakistan is very close to the hearts of UAE leadership and for the reason the Emirates are always standby Islamabad on every hour of trial.

Likewise, Pakistan has throughout been standing shoulder-to-shoulder with the UAE on international forums for the cause of humanity. He was expressing these views on the occasion of inauguration of the Khalid Al-Kaabi Mosque here on Monday. The mosque was constructed at F-9 Fatimah Jinnah Park under the supervision of UAE Mission in Islamabad.

Pakistan and UAE relations are multifaceted and marked by mutual trust and cooperation in various fields, including politics, the economy, culture and defence. The presence of about 1.6 million Pakistanis in the UAE is also a manifestation of the people-oriented relationship between the two countries. Frequent high-level visits and close leadership-level contacts in recent years have been instrumental in strengthening our close and cordial brotherly ties. Pakistan Foreign Minister Shah Mahmood Qureshi’s visit to the UAE in December last year was a follow-up of recent high-level contacts. I am confident that our bilateral ties would continue to grow stronger to the mutual benefit of both nations.

The UAE remains one of Pakistan’s largest trading partners in the MENA region. Trade between the two countries reached $7.5 billion (Dh27.5 billion) during the financial year 2019-2020.

However, in addition to the strong existing relations between the two powers, that have not been clouded by the UAE’s normalization with Israel, there are other motives for the UAE to maintain this relationship.

UAE’s mediation between India and Pakistan

In what could significantly increase the nation’s geopolitical role in the regions, the United Arab Emirates’ (UAE) envoy to Washington has confirmed that the Gulf state is mediating between India and Pakistan to help the nuclear-armed rivals reach a “healthy and functional” relationship.

Top intelligence officers from India and Pakistan held secret talks in Dubai in January in a new effort to calm military tension over the disputed Himalayan region of Kashmir, people with knowledge of the matter told Reuters news agency.

Ambassador Yousef Al Otaiba said in a virtual discussion with Stanford University’s Hoover Institution on Wednesday that the UAE played a role “in bringing Kashmir escalation down and created a ceasefire, hopefully ultimately leading to restoring diplomats and getting the relationship back to a healthy level”.

“They might not sort of become best friends but at least we want to get it to a level where it’s functional, where it’s operational, where they are speaking to each other,” he said.

Ties between India and Pakistan have been frozen since a suicide bombing of an Indian military convoy in Kashmir in 2019, which was traced to Pakistan-based fighters and led to India sending warplanes to Pakistan.

Later that year, India withdrew Indian-administered Kashmir’s autonomy, tightening its grip over the territory and provoking outrage in Pakistan and the downgrading of diplomatic ties and suspension of bilateral trade.

But a series of moves this year suggests serious efforts at resuming dialogue between the two rivals are ongoing.

In February, the Indian and Pakistani armies announced a sudden and rare reaffirmation of a 2003 ceasefire agreement along the Line of Control (LoC), the de facto border dividing the Kashmir region between the two nations.

Days later, Pakistan’s powerful army chief General Qamar Javed Bajwa called on the two arch-rivals to “bury the past” and move towards cooperation. In recent days, the prime ministers of the two nations have exchanged letters, saying they want “cordial relations”.

Meanwhile, a day after the joint ceasefire deal, UAE Foreign Minister Sheikh Abdullah bin Zayed flew to New Delhi to meet his Indian counterpart Subrahmanyam Jaishankar and noted that they “discussed all regional and international issues of common interest and exchanged views on them”, according to a Bloomberg report last month.