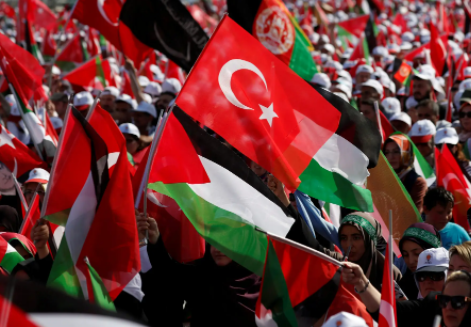 Turkish newspaper Yeni Safak reported that Ankara has taken the first step to re-implement the Libyan model with the Palestinians regarding a security cooperation agreement signed by Turkey and the Palestinian Authority (PA) that recently entered into force.

In a report translated by Arabi21, the newspaper pointed out that Turkey, which expressed strong opinions regarding the recent Israeli aggression on the Gaza Strip, two days ago ratified the security cooperation agreement signed with the PA in 2018.

Yeni Safak indicated that this decision is considered a first step in implementing a model similar to the Maritime Boundary Treaty that Turkey signed with Libya.

Under the agreement that entered into force, the Palestinian law enforcement forces will be trained at the Gendarmerie and Coast Guard Academy in Turkey, the newspaper reported.

The newspaper added that short and long-term projects would be implemented to increase the capabilities of Palestinian law enforcement forces by providing training, consultation and technical assistance.

The newspaper explained that Ankara sent clear messages to the Israeli occupation and took a decisive step during the National Security Council meeting held last Wednesday. As a result: “The security cooperation agreement signed between the Republic of Turkey and the government of the State of Palestine in 2018 was published in the Official Gazette and entered into force.”

The newspaper noted that the exchange of intelligence and operational techniques to combat terrorism are among the most prominent provisions of the agreement, noting that the accord section on maritime and coastal security issues is also significant.

Turkey’s Yeni Safak newspaper last month called for Turkey to implement a maritime zone agreement by signing a deal with Palestine to get access to water and energy rights off Palestine territory.

According to report, Turkey should sign a maritime jurisdiction agreement with the besieged Gaza Strip, similar to the one it made with Libya to strengthen Palestinians’ hand in the international sphere and provide motivation for other countries to sign deals with them.

Gaza has been under a land, sea and air blockade by Israel for 14 years, while the Palestinian Naval Police’s activities are restricted to 11 kilometres from the enclave’s coast.

“By signing such an agreement, the Palestinian people would obtain control over a 10,200 square kilometer maritime zone, which would pave the way for them to utilize all the resources at sea,” Professor Cihat Yayci, a former Turkish navy rear admiral and head of the Maritime and Global Strategies Center at Bahcesehir University, told the Turkish Daily Sabah newspaper.

He continued by noting that the deal would also allow Turkey to expand its maritime jurisdiction zone in the Mediterranean, spoiling Greece and the Greek Cypriot administration’s plans in the area.

According to Yayci, such a deal would also mark the first time Palestine signs an agreement with a world power and would significantly contribute to its formal international recognition and motivate the Palestinian Authority (PA) and other states to make deals.

In 2019, Turkey signed a maritime agreement with Libya through which Ankara aimed to reassert its maritime boundaries, angering Greece and Egypt in the process.

Meanwhile, the Libyan-Turkish Maritime deal continues to function, and the new Libyan intermediate government has embraced the deal, setting an important precedent for similar deals in the future.

Turkey’s National Security Council two weeks ago called on the international community to fulfill its responsibility to find a just and permanent solution to the Palestinian issue.

The security council condemned Israel’s illegal occupation of Palestinian lands and its attacks on the civilian population.

An Egyptian-brokered truce that took effect in the early hours of May 21 ended Israel’s 11-day bombardment of the Gaza Strip.

Israeli attacks in Gaza and the West Bank killed at least 289 people, including women and children, and left behind a trail of destruction. Health centers and media offices, as well as schools, were among the structures targeted.

Turkey therefore continues to voice its concerns about the situation in Palestine to the international community. It remains to be seen whether this will translate into any action. For now, Turkey has taken the initiative on the security and possibly maritime front.