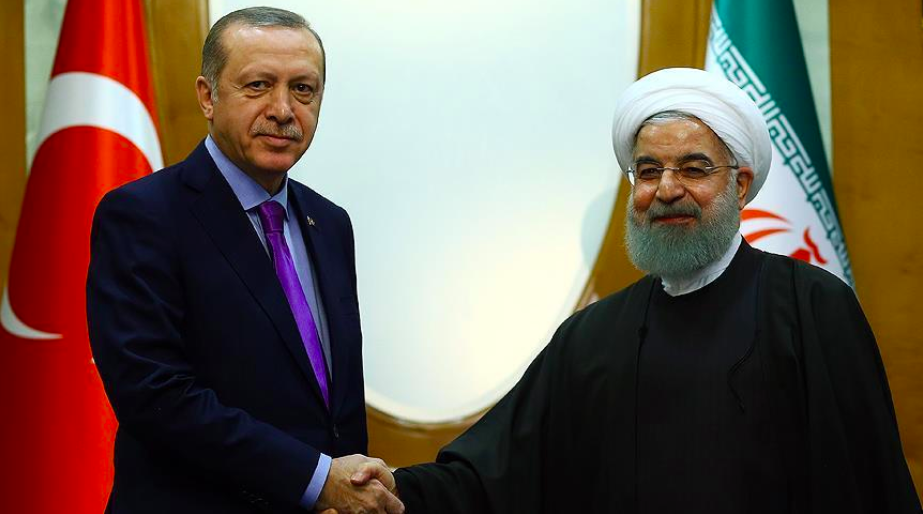 A video conference meeting between top Turkish and Iranian officials was held on Teusday in a sign of willingness from both sides to increase cooperation. The meeting of Iran-Turkey High-Level Cooperation Council was held with the participation of President Recep Tayyip Erdoğan and his Iranian counterpart Hasan Rouhani via videoconference.

“Unfortunately, we had to hold this meeting through video conferencing due to the pandemic. Despite this, it is an important message that we have shown the will to hold our meeting,” Erdoğan said.

Dialogue between Turkey and Iran has a decisive role in solving many local problems, President Recep Tayyip Erdoğan said, speaking ahead of the regular high-level cooperation meeting between the two neighboring countries. “Turkey and Iran dialogue has a decisive role in the solution of many regional problems. I believe that our cooperation will return to its previous levels as the pandemic conditions alleviate,” Erdoğan said at the beginning of the meeting.

Economic and business cooperation was an important topic in the meeting. Chief of Staff of the President of Iran Mahmoud Vaezi says the economic ties between the two countries are of great volume and very good documents have been signed; therefore, it is needed that Tehran and Ankara develop their relations in the banking sector as soon as possible. He further added that the governors of the central banks of the two countries have highlighted this matter while President Hassan Rouhani and President Recep Tayyip Erdogan have also discussed using national currencies in trade and business.

Vaezi went on to say that expansion of the trade ties was discussed during the Sixth Meeting of the High Level Cooperation Council between Iran and Turkey. “It is decided that the two countries give priority to purchasing each other’s domestic products. It was also decided that Iran and Turkey talk about bartering goods.”

Chief of Staff of Iran’s President said energy was another issue discussed by the two sides. Moreover, he said the sides have exchanged views on export of natural gas and petrochemical products. “A committee will be formed to follow up on these issues. We talked about cooperation in the electricity field as well. About the preferential trade agreement, we decided to show more flexibility to work on 60 kind of goods on both sides,” reiterated Vaezi.

Although increased economic and business cooperation is a big step forward in the two powers’ relations, a real breakthrough is geopolitical in nature. It is the agreement between Iran and Turkey to work together in containing the PKK.

Turkey and Iran have agreed to target the Kurdistan Workers’ Party (PKK) and its affiliates in joint military operations.

Tuesday’s statement was the first in recent years where Iran has publicly announced that it would go after the PKK and its Iranian affiliate the Kurdistan Free Life Party (PJAK) in joint operations with Ankara. “Both sides emphasised that it is incumbent upon both countries to fully utilise the existing cooperation mechanisms against the activities of PKK/PJAK elements and the other terrorist organisations along the common borders,” said the declaration. “And to take coordinated steps for a result-oriented cooperation, including joint operations, in countering terrorism and organised crime.”

Turkey has fought a guerilla war with the PKK since 1984, when the organisation first launched its armed campaign to carve out an independent Kurdish state (it now claims to instead want greater autonomy). PJAK was founded in 2004 as an affiliate based in Iran, which also has a significant Kurdish population. Earlier this year, the Turkish air force struck caves and bunkers belonging to the PKK in northern Iraq. Simultaneously, Iran also shelled the targeted areas, signalling that the two countries were conducting coordinated operations to push the group out of the region.

As the PKK/PJAK and all terror groups in the region pose a common threat to the security of both Turkey and Iran, both sides stressed that it is incumbent upon both countries to fully utilize existing cooperation mechanisms against the activities of PKK/PJAK elements and other terrorist groups along common borders and to take coordinated steps for result-oriented cooperation, including joint operations, to counter terrorism and organized crime, said the declaration.

This is a clear sign that Turkey and Iran are on track to becoming robust geopolitical allies, and could form a formidable force in the region should their joint military operations take a larger scale. It looks like it is going in that direction, as both countries reiterated their determination to further enhance good neighborly relations nourished by their strong political will and expressed their resolve to effectively implement their bilateral decisions on the basis of mutual interests, the declaration said.

Background and implications on the region

Turkey and Iran have already been having their interests aligning for the past several years. The nations’ opposition to American and Israeli dominance in the Middle East have been a major common ground. Furthermore, Turkey’s increasing cooperation with Russia has increased the possibilities of getting closer to Russian ally Iran. Turkey faces the UAE in Libya while Iran faces the UAE in Yemen through its Houthi proxy.

Since last year, we have seen the increasing possibility of a new alliance forming between Iran, Turkey and Russia, as all 3 have a common goal of reducing the US’s sphere of influence, as well as the more visible aim of containing the Kurds in Syria.

Despite the positive signs, glaring issues remain in Syria, as they did last year, and the issue of conflicting interests is still a long way from being resolved, with Turkey supporting various rebel groups and holding its own ground in Syria, while Russia and Iran continuing to support Bashar Al Assad.

Nevertheless, the latest online summit between Erdogan and Rouhani and its outcome is a huge step in increasing geopolitical and economic cooperation between the nations. Iran has a large influence in Iraq, Lebanon and Syria due to its proxies, while Turkey has been rapidly increasing its geopolitical and military stature in many years, as seen through its intervention in Syria, strong stances in the Mediterranean, and successful operations in Libya, leading many to believe that it is becoming a regional power to be reckoned with. Hence, should the two (Iran and Turkey) join forces and form a strong geopolitical alliance, they would almost definitely place them as a formidable force and possibly the most powerful geopolitical actors in the Middle East. In fact, it could be argued that Israel and the UAE’s latest signing of a peace agreement was a reaction to Turkey’s increasing geopolitical influence, as well as in anticipation of a possible alliance with Iran, which would threaten Israel’s leading geopolitical role in the region, as well as limiging the UAE’s influence.

Iran and Turkey may follow the same track of action as the Arab states followed with Israel, putting their differences aside to confront a common enemy, while in the process increasing economic benefits on both sides.