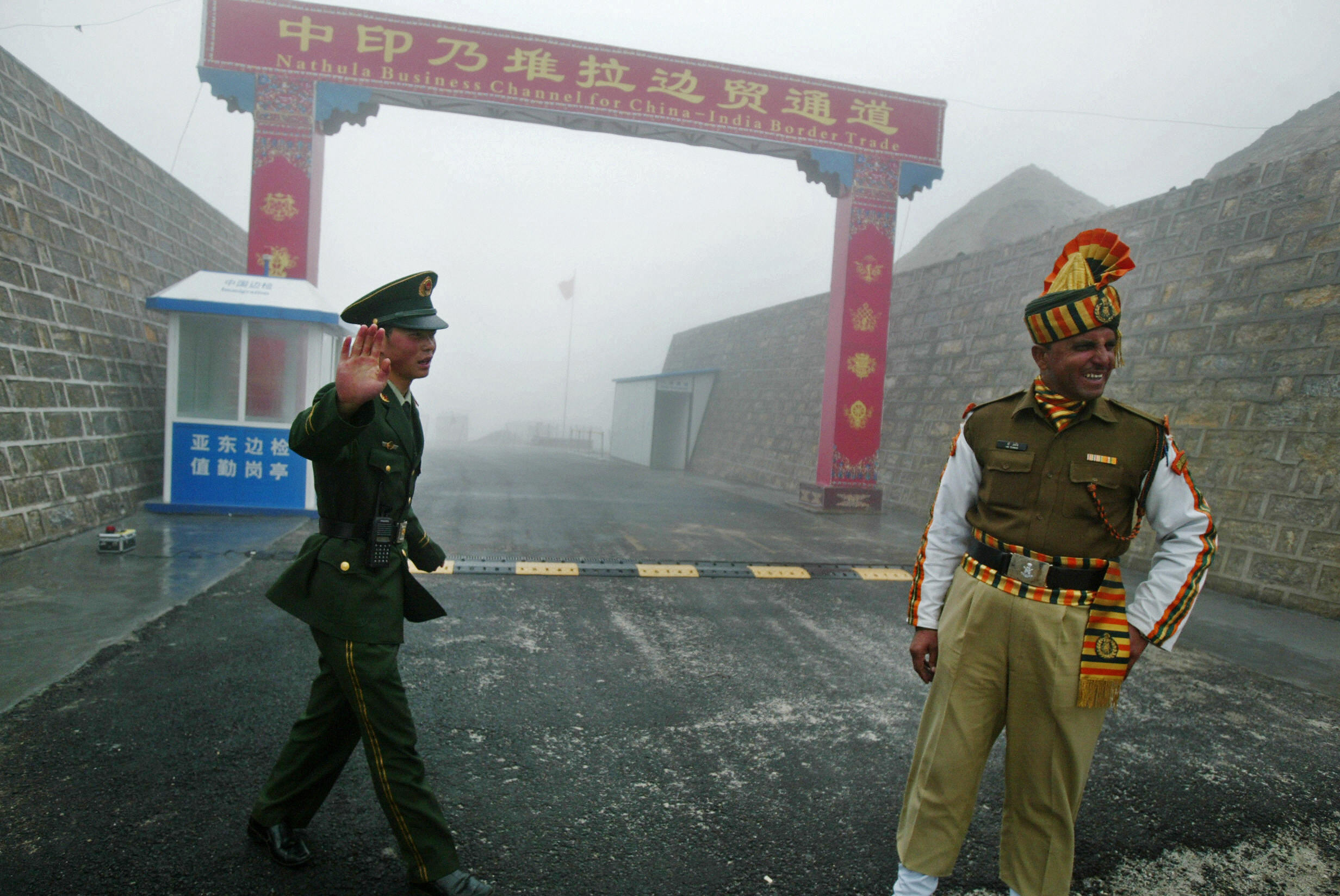 TO GO WITH STORY BY PARUL GUPTA 'INDIA-CHINA-DIPLOMACY-TRADE' In this photograph taken on July 10, 2008 a Chinese soldier (L) and an Indian soldier stand guard at the Chinese side of the ancient Nathu La border crossing between India and China. When the two Asian giants opened the 4,500-metre-high (15,000 feet) pass in 2006 to improve ties dogged by a bitter war in 1962 that saw the route closed for 44 years, many on both sides hoped it would boost trade. Two years on, optimism has given way to despair as the flow of traders has shrunk to a trickle because of red tape, poor facilities and sub-standard roads in India's remote northeastern mountainous state of Sikkim. AFP PHOTO/Diptendu DUTTA (Photo credit should read DIPTENDU DUTTA/AFP/Getty Images)

27th March 2019 | Reading Time: 5 minutes   137 Views
Share
The recent surge of tensions between India and Pakistan has brought the attention of the international community back on Kashmir. Yet, there is another player who has important interests at stake in the region, namely China. Its position must be examined to fully understand the strategic implications of the dispute as well as the geopolitical dynamics of South Asia and beyond. I’m your host Kasim, welcome to another KJ Vid. In this video we will discuss China’s interests in Kashmir. But just before we begin, please check out our new website – kjvids.co.uk – where you can find transcripts for our reports and read lots of other material we will upload. Also, in order to keep KJ Vids financially and politically independent, but also less dependent on YouTube who regularly demonetise our videos, please become a KJ Member by subscribing to one of our packages that enables you to access all of our reports, vote on future topics, ask questions and get other perks.

China in the Kashmir dispute

Even though it is sometimes neglected, the Kashmir issue is a trilateral matter. Along with India and Pakistan, China is also part of the dispute. Around 20% of Kashmir is currently under Beijing’s de facto control as a result of the Sino-Indian war of 1962. Yet, China’s revendications collide only with India. There are two portions of Kashmiri territory administrated by the PRC but claimed by India, which are separated by the Siachen Glacier. The eastern part is Aksai Chin, that was occupied by Chinese troops during the 1962 war. The western half, on the contrary, was ceded by Pakistan to China in 1963, but India still claims it like the rest of Kashmir. Of the two, Aksai Chin is strategically the most important. While the risk of conflict is low and the line of control is generally respected, Beijing is determined to keep it under its authority due to its great strategic importance. As a matter of fact, Aksai Chin is a pivot zone that the PRC must control to pursue its geopolitical ambitions. The area connects the two Chinese autonomous regions of Xinjiang and Tibet, both affected by separatist tendencies and both essential for Beijing to extend its influence towards Central and South Asia, notably in the context of the “One Belt, One Road” initiative. In this regard, Aksai Chin is also the crossroad for the China-Pakistan Economic Corridor, or CPEC, that is being constructed to connect China’s land-locked western provinces with the Indian Ocean and its lucrative maritime trade routes. But Aksai Chin is also useful for Beijing in the context of the broader geopolitical competition with New Delhi. While it does not want high tension along the border and even less an open war, the PRC exploits the existing border disputes with India to keep a certain pressure on it so to hamper its rise and prevent it from becoming a peer competitor. By doing so, Beijing obliges New Delhi to consume resources that it could otherwise employ to develop its economy or build its naval power, both things that would enable it to rival China. It is notable that China’s claims over another contended region, namely the Indian-controlled Arunachal Pradesh, serve mainly to preserve the control over Aksai Chin by distracting India from there.

Reviews for China’s Interests in Kashmir