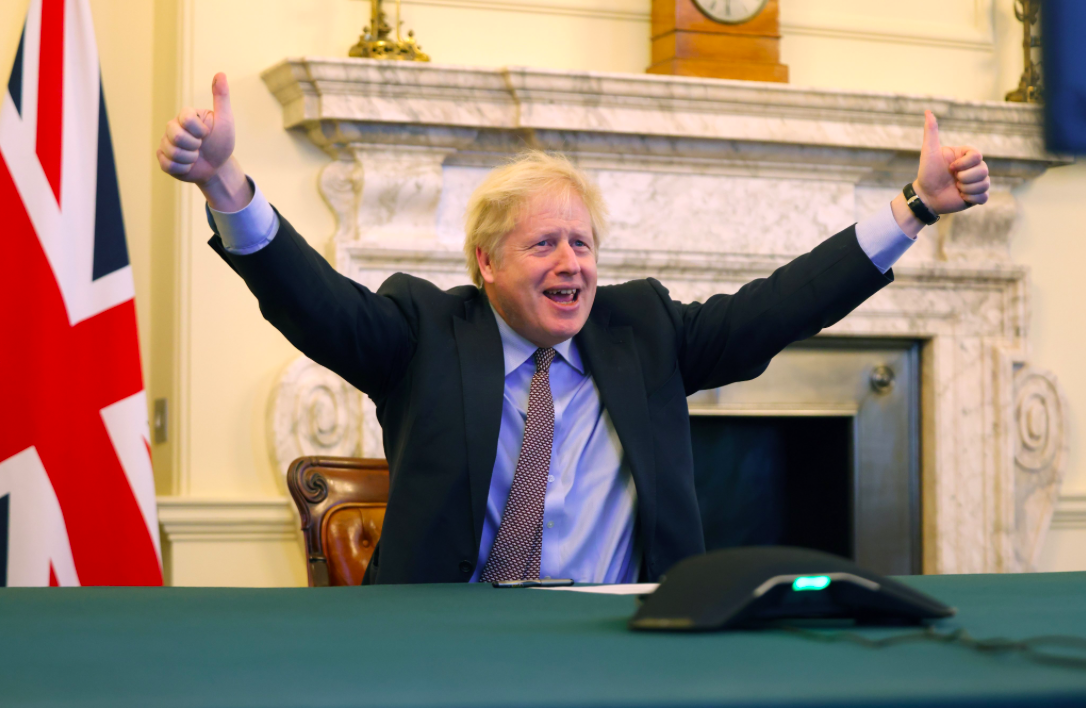 After four and a half long years in European politics, the UK and European Union have finalized terms on a Brexit free trade deal, averting the possibility of a “no deal” Brexit when the transition period ends at midnight on December 31.

The deal will need to be ratified by the UK and EU parliaments. Today there were celebrations on both sides.

“We have finally found an agreement,” said European Commission President Ursula von der Leyen in the immediacy after the deal was announced. “It was a long and winding road, but we have got a good deal to show for it.”

“The clock is no longer ticking,” added EU chief negotiator Michel Barnier. “Today is a day of relief, but tinged by some sadness as we compare what came before with what lies ahead.”

“Everything that the British public was promised during the 2016 referendum and in the general election last year is delivered by this deal,” read a statement released by UK PM Boris Johnson’s office. “We have taken back control of our money, borders, laws, trade and our fishing waters. The deal is fantastic news for families and businesses in every part of the UK.

“We have signed the first free trade agreement based on zero tariffs and zero quotas that has ever been achieved with the EU. The deal is the biggest bilateral trade deal signed by either side, covering trade worth £668bn in 2019. The deal also guarantees that we are no longer in the lunar pull of the EU, we are not bound by EU rules, there is no role for the European Court of Justice and all of our key red lines about returning sovereignty have been achieved.”

On the industry side, Caroline Norbury, CEO, Creative Industries Federation, had a mixed reaction to the news:

“After a year that has hit the UK’s creative industries hard, it comes as a huge relief for many that a deal with the EU has finally been reached, and that a new chapter of our relationship can begin. It is now vital that we avoid a cliff-edge on key arrangements that have enabled our world-leading sector to thrive, such as ease of movement and data adequacy.

“Although we await the finer details of the agreement, first sights include some notable disappointments for the creative industries, such as confirmation that the UK will not be part of the Erasmus scheme and that there will be no more automatic recognition of professional qualifications in fields such as architecture.

There will be no extra charges on goods (tariffs) or limits on the amount that can be traded (quotas) between the UK and the EU from 1 January. However, there will be extra checks at borders, such as safety checks and customs declarations. For services, including finance – which is very important to the UK economy – the situation is still slightly unclear. Services will lose their automatic right of access but the UK said the agreement “locks in market access across substantially all sectors”.

The UK and Turkey to sign free trade agreement

It appears the UK is looking to Turkey, one of the Middle East’s biggest exporters, and already a strong trading partner of the UK, as one of the first targets of a free trade deal, to try to make up for its upcoming inevitable decrease of trade volume with the EU, and consolidate existing trade deals.

The UK and Turkey are set to sign a free trade deal on Tuesday, the first since Boris Johnson secured a new trade agreement with the EU. Please use the sharing tools found via the share button at the top or side of articles.

The two countries have finalised the text of a “continuity agreement” that replicates existing trading terms between Ankara which has a customs union agreement with Brussels and London. Bilateral trade between the countries was worth nearly £19bn last year, according to the Department for International Trade.

The agreement is expected to be signed on a video call this week by representatives from each side. An exchange of diplomatic notes will then allow the deal to come into force even though there is not enough time for it to be ratified by the two countries’ parliaments before the UK leaves the EU single market on December 31.

Liz Truss, international trade secretary, said: “The deal we expect to sign this week locks in tariff-free trading arrangements and will help support our trading relationship, worth £18.6bn last year. It will provide certainty for thousands of jobs across the UK in the manufacturing, automotive and steel industries.” The UK is Turkey’s second-biggest export market but Ankara’s customs union with the EU meant that a free trade agreement could not be finalised until a Brexit deal was in place. That raised fears among Turkish producers of white goods, cars and textiles that their products could be face hefty import tariffs and UK border delays if Britain crashed out of the 27-member bloc.

One British official said there was an “immediate sense of relief” at the agreement, adding that both Turkish manufacturers and their British counterparts had been anxious about the prospect of a no-deal Brexit. “The UK is the biggest export market for home appliances that are manufactured in Turkey,” said Hakan Bulgurlu, chief executive of Turkish manufacturer Arcelik, which trades under the name Beko in Europe. “We welcome the efforts to quickly finalise a free trade agreement between Turkey and the UK that will maintain the essence of our no-tariff, no-quota partnership.”

The UK trade ministry said on Sunday the two nations will sign a deal that replicates the existing trading terms. The trading relationship was worth 18.6 billion pounds ($25.25 billion) in 2019.

Even before the upcoming Turkey deal, 3 weeks ago the UK signed an important trade deal with Egypt, the Middle East’s most populous country, also in anticipation of Brexit.

3 weeks ago, Britain’s ambassador to Egypt signed an agreement with the country’s assistant foreign minister for Europe, Badr Abdelatty. The deal is aimed at strengthening political and trade ties between the two countries, a British government statement said. The agreement will allow British businesses and consumers to benefit from continued preferential access to the Egyptian market after the end of the Brexit transition period.

The agreement will provide tariff-free trade on industrial products, as well as liberalisation of trade in agriculture, agri-foods and fisheries which will make trade easier and deliver significant savings to businesses in both the UK and Egypt.

Total trade on goods and services between the UK and Egypt was worth £3.5 billion in 2019, which the UK said it will seek to expand.

The agreement will allow British businesses and consumers to benefit from continued preferential access to the Egyptian market after the end of the Brexit transition period.

“This agreement highlights the strength of the UK-Egypt partnership, and reflects our shared ambition to build our cooperation on a range of important issues.”

“Stronger trade links and more investment will grow our economies and help both our countries build back better from the impact of the coronavirus pandemic.”

“This agreement is a clear signal of the UK’s enduring commitment to our close bilateral relationship with Egypt and will help strengthen trade and investment ties in the future.”

“It will help provide both British and Egyptian businesses with new opportunities and provide them with the certainty they need to keep trading.”

The UK has therefore already secured or is in the process of securing important trade deals with two major economic and geopolitical powers in the Middle East, signalling a willingness to develop bilateral trade with the region as a whole. This means that the UK will probably try to also strike similar strengthened trade deals with the rest of its Middle Eastern trading partners, starting with the Gulf, which will be economically beneficial to these Middle Eastern countries.