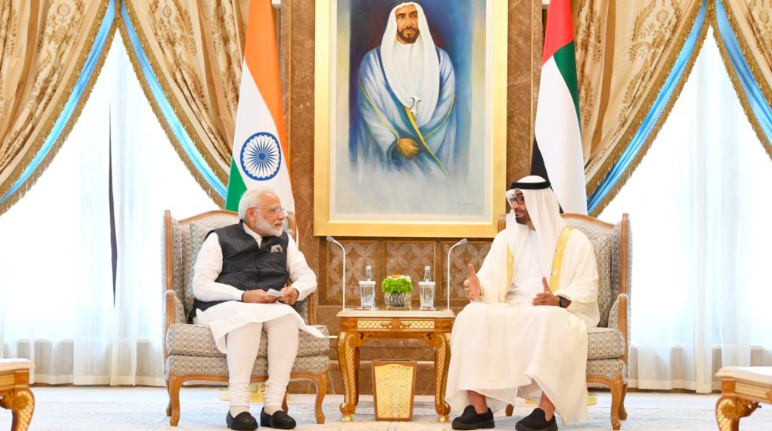 About 24 hours after military chiefs from India and Pakistan surprised the world last month with a rare joint commitment to respect a 2003 cease-fire agreement, the top diplomat of the United Arab Emirates popped over to New Delhi for a quick one-day visit.

The official UAE readout of the Feb. 26 meeting gave few clues of what Foreign Minister Sheikh Abdullah bin Zayed spoke about with Indian counterpart Subrahmanyam Jaishankar, noting they “discussed all regional and international issues of common interest and exchanged views on them.”

Yet behind closed doors, the India-Pakistan cease-fire marked a milestone in secret talks brokered by the UAE that began months earlier, according to officials aware of the situation who asked not to be identified. The cease-fire, one said, is only the beginning of a larger roadmap to forge a lasting peace between the neighbors, both of which have nuclear weapons and spar regularly over a decades-old territory dispute.

The next step in the process, the official said, involves both sides reinstating envoys in New Delhi and Islamabad, who were pulled in 2019 after Pakistan protested India’s move to revoke seven decades of autonomy for the disputed Muslim-majority state of Jammu and Kashmir. Then comes the hard part: Talks on resuming trade and a lasting resolution on Kashmir, the subject of three wars since India and Pakistan became independent from Britain in 1947.

This process appears to be the most concerted effort in years, and comes as the Biden administration is seeking wider peace talks on Afghanistan — a place both countries for years have battled for influence. Indian Prime Minister Narendra Modi wants to shore up growth and focus military resources on the border with China, while Pakistan’s leaders are also facing economic woes and looking to make a good impression with the U.S. and other powers.

Pakistan’s Foreign Ministry didn’t comment on the talks or the role of the UAE, while the foreign ministries of India and the UAE had no immediate comment.

Over the years, India and Pakistan have routinely made peace overtures only to have them quickly fall through, particularly as both sides frequently use the issue to stir up emotions around election time.

In recent months however, there have been signs that both sides are finally willing to put the past behind them and work for a peaceful compromise. Last month, India and Pakistan issued a joint statement saying both sides have agreed to stop firing along their disputed border in Kashmir.

“In the interest of achieving mutually beneficial and sustainable peace along the borders, the two (director generals) agreed to address each other’s core issues and concerns which have propensity to disturb peace and lead to violence,” the statement read. It added that both sides will utilize existing mechanisms including a hotline to resolve tensions and misunderstandings.

Kashmir has always been a contentious issue for the two nuclear-armed rivals. Pakistan and India both lay claim to the full area but control only parts of it.

India and Pakistan said they have agreed to “strict observance of all agreements, understandings and cease firing along the Line of Control (LoC) and all other sectors” with effect from midnight of February 24/25.

In a continuation of this positive atmosphere created between the two historical rivals, Pakistan’s Chief of Army Staff Gen. Qamar Javed Bajwa on Thursday urged India to help resolve the Kashmir dispute peacefully so that the two nuclear-armed rivals could “bury the past and move forward.”

“Stable relations between India and Pakistan is a key to unlock the untapped potential of South and Central Asia by ensuring connectivity between East and West Asia,” Bajwa said while addressing a security dialogue in Islamabad.

“This potential, however, has forever remained hostage to disputes and issues between two nuclear neighbors.”

The army chief added: “It is important to understand that without the resolution of Kashmir dispute through peaceful means, the process of subcontinental rapprochement will always remain susceptible to derailment due to politically motivated bellicosity.

“However, we feel that it is time to bury the past and move forward. But for the resumption of the peace process or meaningful dialogue, our neighbor will have to create a conducive environment, particularly in Indian-occupied Kashmir.”

This willingness from Pakistan’s side to bury the past and work towards a peaceful solution with India, could be crucial in producing results. The UAE’s mediation will also be important, as explained below.

The UAE’s strong ties with both sides an important factor

The UAE is one of the few nations that has a good chance of successfully mediating between India and Pakistan, due to its strong ties with both powers, in several sectors.

The UAE and Pakistan have been developing ties in recent years, in areas that include military cooperation and trade.

Pakistan is willing to work closely in the defence production sector with the UAE to bolster the existing bilateral relations, a top minister has said.

Zobaida Jalal, Federal Minister for Defence Production, conveyed the message to Mohammed Ahmed Al Bowardi, Minister of State for Defence of the UAE, during her visit to the UAE to attend Idex/Navdex 2021 held in Abu Dhabi , said a press release issued here on Wednesday.

The minister attended the inauguration ceremony along with the UAE leadership and other visiting ministers. She also visited Pakistan Pavilion in Idex and appreciated the excellent level of preparedness of Pakistani exhibitors.

The minister conveyed the message of goodwill from the Prime Minister of Pakistan to the UAE leadership.

Jalal thanked the UAE leadership for excellent hospitality provided to her delegation and Pakistani exhibitors in the exhibition. She also congratulated the UAE on successfully holding the Idex despite Covid-19 challenges.

UAE-India ties have also peaked in recent years, and both sides are looking to further strengthen their cooperation.

India’s oil minister, Dharmendra Pradhan on Wednesday March 17 said that India and the UAE discussed ways to strengthen energy cooperation, despite the South Asian nation asking its refiners to reduce their reliance on Middle Eastern oil.

“We discussed about new areas of cooperation in the hydrocarbon sector and beyond, and agreed to remain committed despite the challenges presented by the Covid pandemic,” Pradhan said on Twitter after a virtual meeting with Sultan Al Jaber, the chief executive of Abu Dhabi National Oil Co (Adnoc).

UAE is a key oil supplier to India and a partner in an Indian joint venture that plans to build a 1.2 million barrels per day (bpd) refinery and petrochemical complex on the country’s west coast.

The UAE was the fifth biggest oil supplier to India last month. India is also the world’s third-biggest oil importer and consumer.

The oil minister also discussed with Jaber ways of strengthening and providing momentum to the bilateral strategic energy partnership between the countries.

The UAE’s strong ties with both India and Pakistan, that are only getting stronger, make it the perfect mediator for the conflict, as it can help find a compromise through diplomatic talks, something that few countries can achieve.