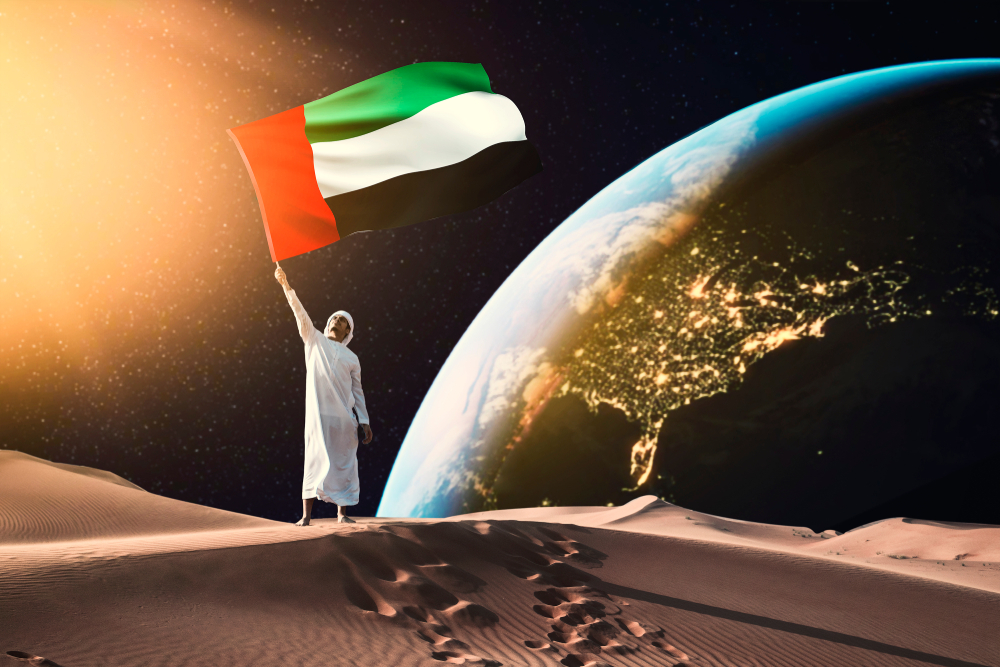 The UAE has finally launched its much awaited first space mission to Mars. The first Arab interplanetary space probe blasted into the sky early Monday, beginning its epic journey to Mars, a landmark moment for the Arab world as UAE makes history.

The Hope Probe lifted off from Japan’s Tanegashima Space Centre aboard a Mitsubishi Heavy Industries’ H-IIA rocket and in about 200 days from now, the spacecraft will reach Mars orbit and begin its mission to study the Red Planet’s atmosphere. Once it enters Mars’ orbit in the first quarter of 2021, the Hope probe will mark the UAE’s 50th anniversary. The probe will travel 493 million kilometers into space in a journey that will take seven months and will orbit the Red Planet for one full Martian year of 687 days to provide the first truly global picture of the Martian atmosphere.  Omran Sharaf, the project director of Emirates Mars Mission, told journalists in Dubai about an hour and a half after the liftoff that the probe was sending signals. Sharaf said his team now would examine the data, but everything appeared good for now.

The Hope probe will be the first to study the Martian climate throughout daily and seasonal cycles. It will observe the weather phenomena in Mars such as the massive famous dust storms that have been known to engulf the Red Planet, as compared to the short and localized dust storms on earth. It will also examine the interaction between the upper and lower layers of the Martian atmosphere and causes of the Red Planet’s surface corrosion, as well as study why Mars is losing its upper atmosphere. Exploring connections between today’s Martian weather and the ancient climate of the Red Planet will give deeper insights into the past and future of Earth and the potential of life on Mars and other distant planets.

The mission is led by Emirati engineers and scientists, with significant sharing of expertise and technical knowledge by colleagues at UC Berkeley and three other U.S. institutions the University of Colorado at Boulder, Arizona State University and Northern Arizona University. “It was great to see everything going according to schedule today. It looks like things are all on track. It’s a huge step in terms of space exploration to have a nation like the UAE taking that giant leap to send a spacecraft to Mars,” Astronomer Fred Watson said. “Being on route to a planet like Mars is an exceptional achievement.”

A newcomer in space development, the UAE has successfully put three Earth observation satellites into orbit. Two were developed by South Korea and launched by Russia, and a third its own was launched by Japan. “With the Mars mission, the Emirates is trying to inspire young people to go into technical fields, as part of a larger vision for a post-oil world,” Robert Lillis said, who is the SSL associate director for planetary science and the UC Berkeley lead for the Mars mission, who monitored the launch from California. said. “The government has invested heavily in education, especially women’s education, to lay the groundwork for a future in which entrepreneurs, inventors and ideas not oil are funding their economy.”

Overall, about one-third of the 150 Emirati scientists and engineers on the mission team are women, while women make up about 80% of the science team, according to a recent article in the New York Times. The team’s average age is 27. The Emiratis involved in the program also acknowledged it represented a step forward for the Arab world, the home of mathematicians and scientists for centuries before the wars and chaos that have gripped wide swathes of it in recent times.

The field continues to develop in the UAE as a whopping 37,000 applications from the Arab youth were drawn to register for the first round of the UAE’s Arab Space Pioneers. Sheikh Mohammed bin Rashid Al Maktoum, Vice-President and Prime Minister of the UAE and Ruler of Dubai, launched the first-of-its-kind specialised training programme earlier in July, in the buildup to the Mars mission.

Will the UAE and Saudi Arabia enter a space race?

Now that the UAE have sent their first mission to Mars, the question arises as to whether their neighbours Saudi Arabia will follow suit and enter a space race.

Back in 1985, the Saudi royal and astronaut Prince Sultan bin Salman became the first Arab to fly in space, orbiting Earth on the shuttle Discovery, evidence that the region had an ambition to play a role in space research. Since then, researchers mainly in the Gulf states have continued to make breakthroughs in space science. This research is mainly in two areas: satellite technology and the discovery of distant planets. Furthermore, in addition to the gathering of information about the planet, the United Arab Emirates has announced plans to build the world’s first human colony on Mars by 2117. Colonizing Mars may be a far-off dream, but other parts of the project are more realistic. Meanwhile researchers in Qatar have discovered six new exoplanets since 2010—planets belonging to a solar system other than our own.

The Saudi space program carried on less obtrusively into the early 2000s. The country started building its own satellites at the King Abdulaziz City for Science and Technology (KACST), remaining the clear leader in space among the Gulf powers until 2004, when its main geopolitical rival, Iran, created its own space agency. Meanwhile, the Emarati rulers realized that space technology would help the U.A.E. decrease its reliance on oil and build its international standing. In 2006, Maktoum founded a space center, subsequently named after him. Three years later the facility unveiled DubaiSat-1, a largely Korean-made satellite. In 2013 came DubaiSat-2, this time with labor divided evenly between the two countries, and then, five years later, KhalifaSat, constructed entirely by Emiratis.

Meanwhile, earlier this year, Abdul Aziz Al Al-Sheikh, CEO of the Saudi Space Commission, said the Space Generations Program (Ajyal) launched by the Saudi Space Commission will contribute towards establishing a national base for human capital in the space sector. Al-Sheikh added that the program was striving to cooperate with specialized academic circles to achieve further progress in research related to space science and its applications. Director general of the Space Generations Program, Ilham Al-Harbi, explained that the program had a comprehensive set of goals and strategic visions that aim to instill inspiration in generations to achieve leadership in space science.

It is clear that both Saudi Arabia and the UAE are fighting to increase their presence in space, and while Saudi Arabia have an older and more established space program, the UAE now seems to be overtaking their neighbours, which could spark further developments.

It is not only the Gulf that is investing in developing their space program. Turkey has also increasingly developed its space program in recent years, as a part of their push to become a technological powerhouse.

Last year, Turkish President Recep Tayyip Erdoğan signed an executive order to form the country’s first official space agency. The agency is expected to develop technologies for rocket launches and space exploration, as well as to coordinate the space-related activities of the country’s other space-research centres, according to the order, signed on 13 December. Members of Erdoğan’s Justice and Development Party have mentioned the idea of establishing a space agency several times since coming to power in 2002-2003. But it remained a vague and recurring campaign promise until 2016, when it was first officially included in the government’s action plan.

In a major policy speech delivered on 16 January 2020,  Erdoğan unveiled a range of large government infrastructure and technology projects for 2020 and beyond. The speech included the promised release of a national space programme and the launch of several communication satellites over the next two years, with one being built indigenously by Turkish aerospace companies. Speaking about Turkish satellite development, President Erdoğan said that Turkey will launch the Türksat 5A satellite in the third quarter of 2020 on board a SpaceX Falcon 9 satellite launch vehicle, while Türksat 5B is expected to be launched, again by SpaceX, sometime in 2021. Türksat 6A is the first domestically built geostationary communication satellite in Turkey and is expected to be launched no later than the end of 2021. “With this project, Turkey will become one of 10 countries in the world that produces its own telecommunication satellites,” President Erdoğan said about the Türksat 6A project.

The Turkish government already funds several space-research centres, two of which will now see their funding cut as money is redirected to the new organisation.

It is visible that the UAE and Turkey are currently the fastest developing space programs in recent years, with ambitious projects that are important for the nations’ economies. This could be the start of an astronomical revival in the Muslim world.