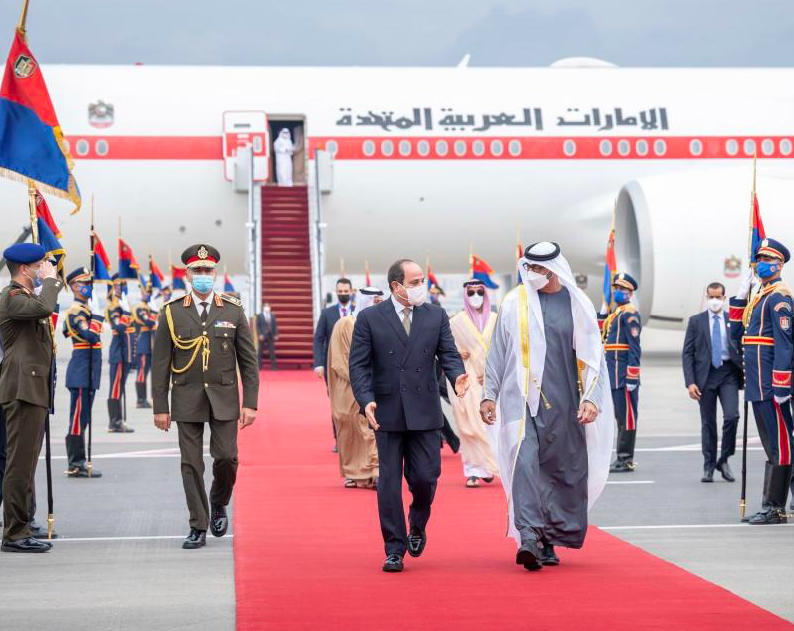 The UAE strenghtening ties with Egypt

In the wake of the Abraham Accords and political normalization with Israel, the United Arab Emirates and Egypt are signaling their determination to consolidate ties with the Eastern Mediterranean region, starting with a high-level meeting between Sheikh Mohammed bin Zayed Al Nahyan and Egyptian leader Abdel Fattah al-Sisi in Cairo.

“President al-Sisi received His Highness Sheikh Mohammed bin Zayed at the Ittihadiya Palace in Cairo, along with H.H. Sheikh Tahnoun bin Zayed Al Nahyan, national security adviser; and H.H. Sheikh Mansour bin Zayed Al Nahyan, deputy prime minister and minister of presidential affairs; along with their accompanying delegation,” it was reported. The goal was to discuss “strengthening their cooperation and coordination in containing the regional and international humanitarian and economic repercussions of the pandemic and preparing for the recovery phase.”

They also discussed the region and the need for “establishing stability in the Middle East based on cooperation and coexistence.”

These are key issues because stability is supposed to link the UAE, Bahrain, Egypt and Israel together. In addition to defense measures, strengthening mutual coexistence is being highlighted in their talks.

UAE state media reported: “Bilateral ties between the two countries have witnessed considerable development in recent years due to their joint political will to reinforce them, Sheikh Mohammed added, pointing out that the region and the rest of world are facing rapid changes and developments that directly affect the interests of the Arab region, most notably the increasing attempts to meddle in the internal affairs of Arab countries and the risks posed by extremism and terrorism, in addition to other risks to Arab and global security and sovereignty.”

According to Al Ain News, an online portal in the UAE, there have been 22 high-level visits between the two countries since 2014. This is how strong the Cairo-Abu Dhabi relationship has become. Saudi Arabia is a key ally of both.

The UAE joins the EMGF

The UAE and Egypt have announced the participation of Abu Dhabi in the Eastern Mediterranean Gas Forum as an observer. The announcement coincided with the visit to Cairo of Abu Dhabi Crown Prince Sheikh Mohammed bin Zayed and his meeting with Egyptian President Abdel Fattah al-Sisi.

On Wednesday, Egypt announced that the UAE has joined the Cairo-based East Mediterranean Gas Forum as an observer.

In a statement, the Egyptian presidency indicated that the two sides stressed “the importance of the added value that the UAE will contribute to the activities of the forum to serve the strategic interests and enhance cooperation and partnership between the forum countries.”

France has applied to join, and the United States and Europe have applied for observer status.

According to the US Department of Energy, the UAE has the seventh largest proven reserves of natural gas in the world, at just under 215 trillion cubic feet.

The UAE joining confirms the forum has become an attractive platform, on which the interests of many regional and international powers converge.

The Cairo-based forum, according to experts, aims to become a “Gulf of Gas” similar to the “Gulf of Oil” that emerged in the past decades. This means that the forum could lead to a clash of interests with countries like Turkey.

Countries leading the forum have only committed to respecting international law but also developed their grouping to transform it into a leading regional hub for gas suppliers.

What does the UAE gain?

The UAE joining the forum has large implications on the region, and it is important to look at why the UAE would want to join. The clear answer is to counter Turkey’s increasing geopolitical might in the Mediterranean, and to therefore limit Turkey’s sphere of influence, in doing so, supporting Egypt’s targets in the sea.

The move sends a clear signal to their common Turkish rival, and taking an important step in one of the hottest open rows, namely the issue of the sovereign rights to the energy resources in the eastern Mediterranean.

It comes at a time when complex talks sponsored by the United States, Kuwait and the Sultanate of Oman are taking place on a reconciliation between Saudi Arabia and Qatar that will not exclude Turkey.

An Arab political analyst described the UAE’s accession to the forum as a “clear message,” that “if Turkey is in the Gulf and expanding in Yemen, then the Gulf in turn can go to the Eastern Mediterranean.”

In a statement to The Arab Weekly, the analyst pointed out that this step shows that Egypt and the UAE are still following the same line in their position towards Turkey and its activities in the region, especially with regard to its role in Libya and open hostility to Egypt and the UAE, and to its recent manoeuvring to suggest that the hostility with Saudi Arabia is on its way to a near end.

The analyst, who wished to remain anonymous, considered that the UAE sees in Egypt the regional counterweight to Turkey, and therefore continues to coordinate with it at the highest level regarding the common stances in the face of Turkish expansion and taking practical steps that show common firmness towards Ankara and its bets on a broader calm in the Arab region about its activities therein.

He stressed that Egyptian-Emirati signals show that the circumstantial rapprochement that occurred between Ankara and Riyadh on the side-lines of the G20 summit will not be an entry point for reconciliation with Turkey without Ankara revising its positions and roles in Libya, Yemen and Qatar.

The expansion of the EMF alliance would increase the pressure on Turkey and send strong messages to President Recep Tayyip Erdogan on the presence of regional and international determination to stop his policy of imposing a fait accompli by continuing exploration operations in disputed waters.

Last month, the UAE and Greece signed a foreign policy and defense agreement as their mutual tensions with Turkey in the Mediterranean Sea continued.

The UAE has already been trying to geopolitically corner Turkey through the Mediterranean, due to the geopolitical conflict between the two countries. This can be seen through the UAE’s alliance with France, the latest meeting with Greece, and now close cooperation with Egypt. Although these moves are tilting the tide in the UAE’s favour, it cannot be said definitively that this will be enough to contain Turkey, as such moves in the past have only increased Erdogan’s insistence on territorial and maritime claims. In addition to this, Turkey’s recent reconciliation with Saudi Arabia, and already close partnership with Qatar could mean that the UAE will be the only major power in the Gulf to move into the Mediterranean to contain Turkey, which may not be enough. Turkey’s maritime strength and position in NATO will both be major obstacles to the UAE and its allies achieving their goals, and if both parties insist on their claims, a maritime war could break out due to the importance of the resources in question and geopolitical stakes.